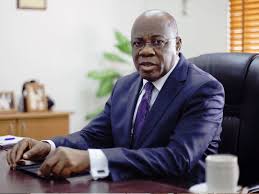 Olisa Agbakoba, former president of the Nigerian Bar Association (NBA), says the advocacy for a political restructuring of Nigeria should be suspended because President Muhammadu Buhari does not believe in it.

The lawyer, who is a leading advocate of restructuring, said it is tearing the country apart.

He said this at a press conference in his Ikoyi, Lagos office, on Wednesday.

The senior lawyer presented a document entitled, ‘legal and institutional restructuring for next Nigeria” at the event.

According to him, the ideas contained in the document will generate not less than 10 million jobs if implemented.

He said the call for restructuring by political parties and sub-national groups is causing more harm to the country because Buhari does not believe in it.

“Rather than bring us together and strengthen us, restructuring has pulled us back. I personally will urge all political parties, all sub-nationalities, like Afenifere, Ohanaeze, Ijaw national, etc, for now, to suspend it, because it is tearing us apart,” he said.

“Let us put restructuring on hold and I say this not because I don’t believe in it but it is causing trouble in the North and the South. So, I will rather call on all the 36 states to pursue what I call cooperative federalism. Let us cooperate; let us forget about who is exercising what power.”

There have been clamours for the political restructuring of Nigeria by different groups and personalities.

Atiku Abubakar, presidential candidate of the Peoples Democratic Party (PDP) in the last election, said he would restructure the country in six months if elected president.

Ayo Adebanjo, a leader of Afenifere, the Yoruba socio-cultural group,‎ also said Nigeria will collapse if it does not restructure.