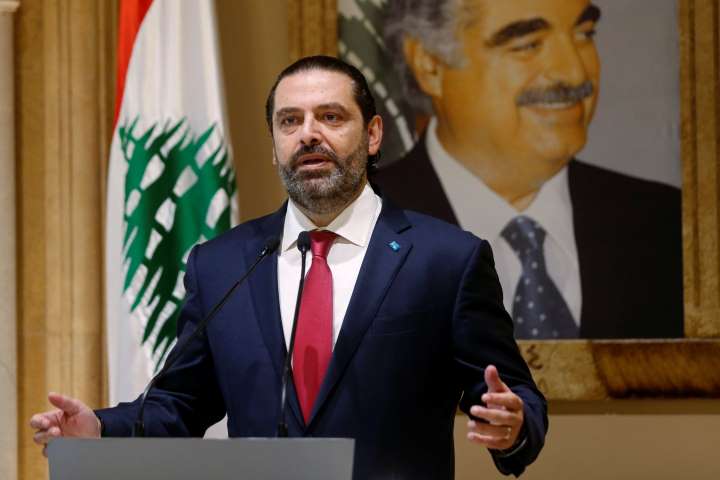 Lebanese Prime Minister Saad Hariri on Tuesday handed his resignation to President Michel Aoun in response to two weeks of protests against his government.

“I have reached a deadlock,” Hariri said in a televised speech before he headed to the presidential palace in Baabada.

He urged the Lebanese people to maintain the stability and security of their country. “No one is bigger than the country,” he said.

Lebanese protesters have been in the streets since October 17, keeping major roads blocked and paralysing the entire country.

The protesters accuse the country’s political class of mismanagement, the waste of public funds and rampant corruption.

Hariri called on all his political partners to assume the responsibility of protecting Lebanon and promoting its economy.

“There is a serious opportunity that shouldn’t be missed, and I place my resignation at the disposal of the president and all of the Lebanese,” he said.

Hariri’s resignation means the president will have to hold parliamentary consultations to name a new premier to form a new government.

Hariri’s resignation prompted Lebanese protesters at major squares in the capital and in other parts of the country to celebrate and chant “No one is bigger than the Lebanese people.”

They were seen dancing in the streets and waving Lebanese flags.

Shortly before the resignation address, at least six people were wounded in violence that erupted between anti-government protesters and followers of two Lebanese Shiite movements, who tried to reopen a major road blocked by protesters in the capital, Beirut.

The Lebanese Red Cross said the six suffered injuries from stones and being hit by sticks in the area of Ring Bridge.

The followers of the Amal and Hezbollah movements also forcefully dismantled tents set up by protesters in Martyr Square in central Beirut, setting fire to some of the tents.

“They are closing roads to the Lebanese, who are trying to reach their work and run their daily lives.

“This is not fair. We will open the road no matter what,” a follower of Amal movement said.

The counter-protesters also broke the cameras and attacked the television crews of private Lebanese channel MTV.

Followers of both Shiite groups also dismantled tents that were set up by protesters on the Ring Bridge, which was the boundary between west and east Beirut during the 1975-1990 civil war in Lebanon.

The country’s leaders have held a series of talks in a bid to end the stand-off that threatens to push the country to the brink of a political and financial crisis.

However, the protesters had rejected the promises of reforms and demanded the government’s resignation.

Nasrallah, an ally of Aoun, on Friday warned the protesters against triggering chaos and causing a political vacuum.

He urged the protesters to give more time to the government, which last week unveiled a package of economic reforms in an effort to appease them.