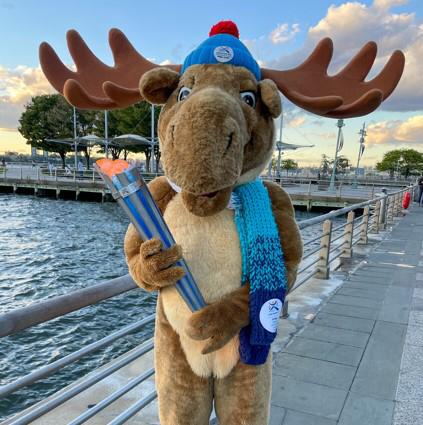 The symbolic flame traveled to New York City after a delegation – comprised of members from the Adirondack Sports Council (ADKSC), State of New York, Olympic Regional Development Authority (ORDA), and the Village of Lake Placid – traveled to Turin, Italy to participate in a ceremonial lighting.

“The city of Turin and Lake Placid may not be similar in size or industry yet they share a special bond as they have each played host to Olympic Games and University Games,” said Ashley Walden, executive director of the ADKSC, the Lake Placid 2023 FISU Games’ Organizing Committee. “It was an honor to ignite the FISU Flame in this historic city and return it once again to Lake Placid.”

The Lake Placid 2023 FISU Games, set for Jan. 12-22, is a competition and educational festival expected to draw 2,500 collegiate-athletes and delegates from some 600 universities across 50 countries. The competition consists of 12 winter sports and 86 medal events contested throughout New York’s Adirondack region, including Lake Placid, Saranac Lake, Wilmington, North Creek, Canton and Potsdam.

For the first time, the FISU Flame is being carried in a sustainable torch, with no actual combustion or flame present. Instead, LED lights produce a brightly illuminated FISU Flame in a carbon-free presentation.

The 22-inch-long torch was created and built by Adirondack Studios of Argyle, N.Y., the same business that built the award podiums for the 1980 Olympic Winter Games. The custom-made torch consists of elongated steel, encasing a glacial-blue body topped by recycled crystalline glass, representing an artistic interpretation of ice and water.

The unveiling event at Pier 45 also launched the Lake Placid 2023 FISU Games’ Save Winter campaign. Powered by Hydro-Québec and supported by Microplus, the movement is designed to unite all who love winter to work as one toward saving “the season of snow.”

Serge Abergel, chief operating officer of Hydro-Quebec Energy Services (U.S.) Incorporated, added “It is a privilege for us to be here today during Climate Week NYC to show our support for the Lake Placid 2023 FISU World University Games and the arrival of the torch on New York soil. Supporting the Lake Placid 2023 FISU Games was an easy decision for us at Hydro-Quebec, first because we are committed to saving winters and fighting climate change, and second, because we believe bringing communities together around a common cause is powerful.”

Adam Lake, head of Climate Week NYC, added “It’s exciting that the Lake Placid 2023 World University Games is partnering with Hydro-Quebec on the Save Winter campaign to raise awareness on the need to accelerate climate action and that the flame is arriving here in Manhattan during Climate Week NYC.”

Mauro Cedrani, CEO of Microplus from Italy, added “Microplus as the official provider of Data Processing and Timing services for the Lake Placid 2023 FISU Games is proud to have given its sponsorship contribution to the Save Winter campaign that aims to help and find possible solutions to climate changes that sadly afflict all countries worldwide.”

NYS Olympic Regional Development Authority, President & CEO Michael Pratt, said “We look forward to hosting the FISU Games for the second time in our modernized facilities once used for the 1932 and 1980 Winter Olympic Games. With each modernization project, the priority has been on sustainability and mitigating climate impacts to winter activities. Together, with the initiatives to be implemented for the Games, we look forward to helping educate and be a resource for other host cities.”

Hope Knight, Empire State Development President, CEO and Commissioner, added “The Lake Placid 2023 FISU World University Games will be the latest in New York’s rich tradition of world-class sports competition. This January, Lake Placid and the surrounding Adirondack communities will take center stage before a global audience, punctuated by a now-sustainable FISU Flame, and we’re excited to welcome the Games, its athletes and fans, back to the North Country.”