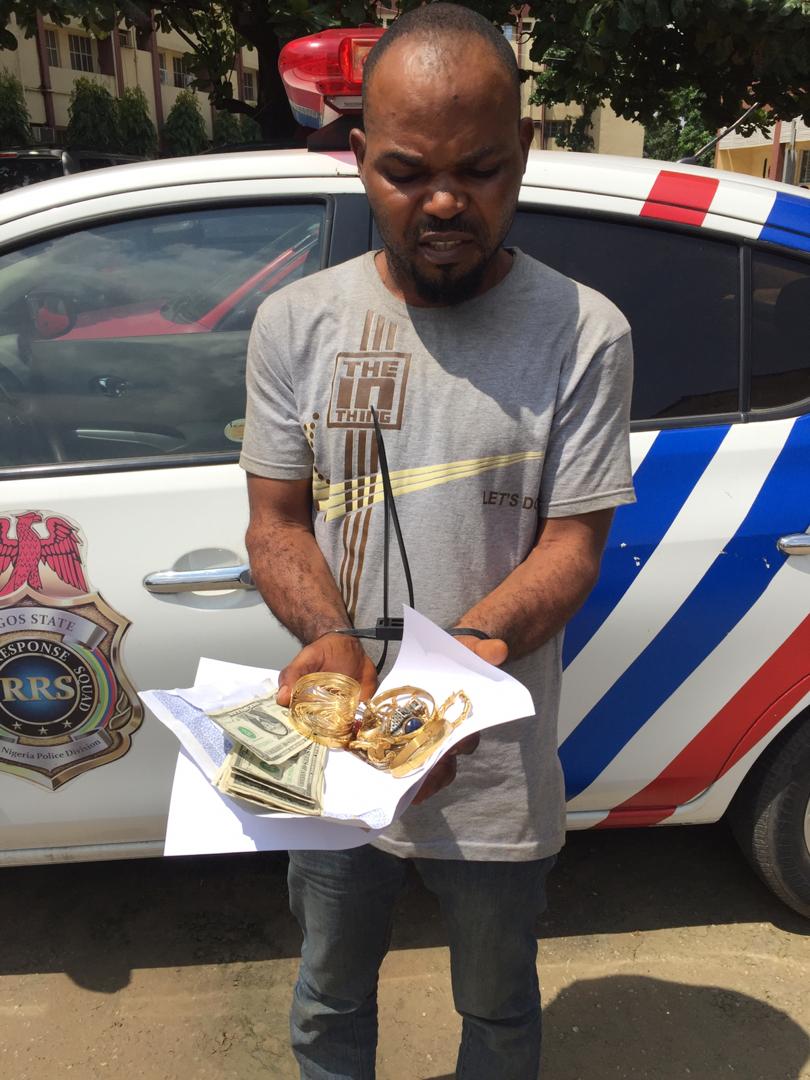 Share
Joy Anyim
A  37-year-old domestic help agent, Francis Okputu, whose speciality is to recruit young boys and girls from the eastern part of the country, connect them to those seeking their services in Lagos,  and subsequently use them to rob their employers have been arrested.
Okputu, formerly a laundryman, was arrested by a decoy team of the Lagos State Rapid Response Squad (RRS), a unit of the Lagos State Police Command.
Investigation revealed that the suspect and his wife had been parading themselves as house help agents since 2003.
Their mode of operation was to get the job seekers a job as domestic helps, with an agreement to collect half of their salary for the first month as commission fee.
READ ALSO:MaharajJi recommends EFCC, ICPC screening for ministerial nominees
Months after, they would contact the helps introducing them to the idea of stealing jewelries, money and other valuables from their employers.
In his confessional statement, Okputu said he connects at least15 persons with jobs evey year. He said the idea of robbing employers was born out of his increased financial burden.
“ I Have been helping Lagosians get house helps and everybody in my neighborhood knows that’s what I do and they also make recommendations and link me with their relatives who need my service.”
He met his waterloo after he had attempted to rob an employer of her gold jelweries and  foreign currency, the suspect said, “Sometime in May this year a friend directed a woman, Onoz Joy, to me to help her get a housemaid job which I did and all was fine until the next month when she began to call me that her Mistress does not like her, begging me to do something about it.
“ Joy told me her madam was wealthy, so we planned a way to loot the unsuspecting employer. I called Joy one day and warned her not speak English throughout our conversation. I told her to steal her madam’s money, jewelries and also help me get her picture and deliver it to me.”
The suspect told Joy the gold jewellery would be replaced with copper and that he would take the picture to a prophetess who will help him bewitch and make her not to question any of the girl’s deed after stealing her things.
Not comfortable with the arrangement, Joy had reported Okputu’s plot to the police. She had also told her employer of the move to loot her.
They played along with Okputu’s arrangement. The Mistress gave Joy some hard currencies, Jewelries and her picture and told her to contact Okputu that she had successfully gotten some valuables.
The suspect unknowingly instructed Joy to meet him at Iyana-Ipaja to handover her loots to him and that he would arrange how to get the fakes across to her by doing imitations of the jewelries to avoid any suspicion.
Officers who had been contacted by the employer swung into action and laid siege for Okputu at the agreed location where he was arrested after receiving the loots.
READ ALSO:AAC reaffirms Sowore as national chairman, expels Ezenwa
After his arrest, the Decoy team of RRS visited some housemaid whom the suspect  had installed in different part of the State to question them if he had one time or the other asked them to bring their employer’s valuables.
The police also visited the said prophetess who was to help hypnotize Joy’s mistress and she disclosed that the last time she saw him was in February 2018 when he came for prayer, asking her to help hypnotize a woman who employed one of his clients. The prophetess said she refused his demand and sent him out of her church because she doesn’t indulge in such practice as a servant of God.
Recovered from the suspect at the point of his arrest were 15 Dollar notes, sets of gold jewelries worth N450,000 and a picture.
The Commissioner of Police, CP Zubairu Muazu in his reaction to the incident directed the transfer of the case to State Criminal Investigation and Intelligence Department (SCIID) and advised Lagosians to be conscious of whom they employ as domestic staff to avoid theft of their hard-earned properties.
Related Posts