...Sometimes in bad faith – The Renaissance 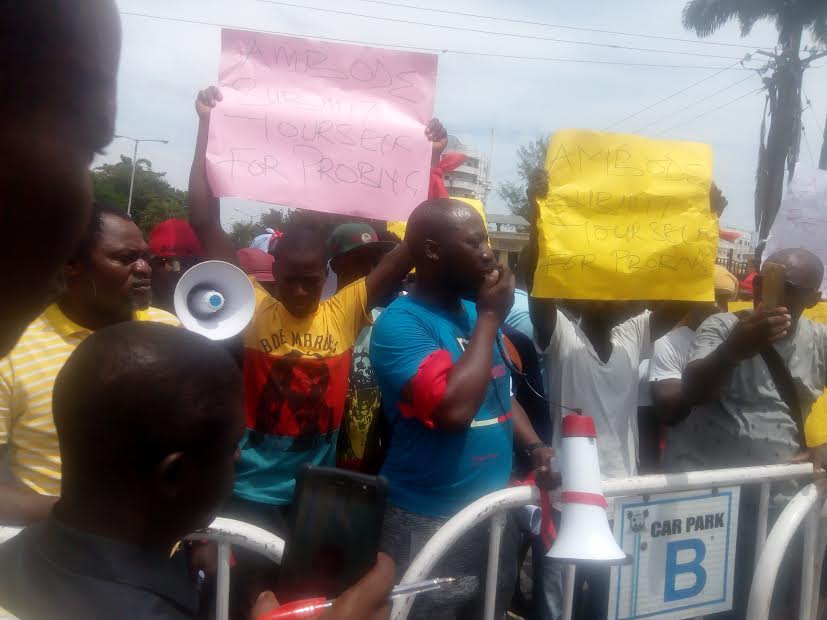 A pro-democracy group, Lagos Peace Movement (LPM), has said that, calling for investigation into the activities of both past and present administrations is normal, legitimate and democratic in any civilised society where true democracy is the norm.

The group is reacting to statement of another organization, The Renaissance Group that condemned a team of protester from the Lagos Youth Vanguard (LYV), who stormed the Lagos House of Assembly calling for the probe of the immediate past administration in the state under Governor Akinwumi Ambode.

The Renaissance Group, in a statement signed by Daniel Awesu and Abdul-Quadri Enikanolaiye, chairman and secretary general of the group respectively said that all attacks on the person of the former governor of Lagos State, Akinwunmi Ambode would fail, describing the protest as “highly despicable, unjustified, embarrassingly shameful and uncalled-for.”

But in a counter statement, Lagos Peace Movement (LPM), explained that the call for investigation into the immediate past administration of the former Governor Akinwumi Ambode is not to witch hunt anybody but to ascertain its propriety or otherwise while in office.

In a media interaction in Lagos, the group’s Publicity Secretary, Comrade Adekunle Adeosun said, “as an organization that advocates peace, justice and transparency in governance, we support all other groups, especially, the recent protesters under the umbrella of the Lagos Youth Vanguard (LYV), calling for the probe of the immediate past administration in the state.”

According to him, the call for the probe is sequent to the template already laid by the Lagos State House of Assembly and other organizations, stressing that, “the call for proper investigation of the last administration is never to witch hunt anybody but to make things clear about how the state’s finances were handled during the period in question.”

Adeosun went further to disclose that, “as a result for the above submission, we have briefed our legal team to commence a process of compelling the Lagos State House of Assembly, the Economic and Financial Crime Commission (EFCC) and other relevant agencies to inform the public the latest developments on the matter.”

The group’s spokesman said the resolve to go the legal way was to be certain about the true situation of things, stating that, “we have for long been relying on social media reports and we don’t want to act on rumours or unconfirmed reports as a civilised group.”

According to him, it is to allay the fears of the 20 million residents of the state that activities of the government in every critical sector in the state during the period under review were in conformity with due processes in the award of contracts saying, “our action is to prevent the fate of 20 million Lagos people from hanging in the balance.”

Against this background, the group therefore demanded that, “Lagos and tax payers’ money allegedly kept either by individuals or institutions be returned or be retrieved,” saying, “Transparency and accountability should be the hallmarks of governance in a cosmopolitan state like Lagos to allow and sustain rapid growth and development.”

On the stand of the Peoples Democratic Party (PDP), condemning the agitation for the probe, Adeosun said, “we are neither shocked nor surprised because it appears as if the PDP wants the people to believe that the party and the immediate past administration in question are Siamese twins that are inseparable partners in failure,” saying, “hence, the party does not deserve to be dignified with response.”

He submitted that, the PDP’s abysmal performance for 16 years while in power in the country speaks volume about its failure to meet the yearnings and aspirations of the good people of Nigeria, saying, little wonder the party was eased out of office in 2015 with ignominy.

But The Renaissance Group said that while it was not opposed to genuine protests and criticism, it was opposed to deliberate attempts to tarnish the image of the former governor.

“Sponsored and money-induced protests and attacks by faceless and disgruntled elements are harmful to any democracy and social well-being of a society,” the group declared, concluding that, “No doubt, this is one of the series of intentionally planned persecution and political assaults on the former Governor Ambode in order to wickedly rubbish his rich and enviable credentials and pedigree.”