Kogi 2019: Melaye in the ring, vows to unseat Bello 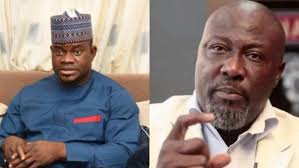 Senator Dino Melaye is one of the  frontine aspirants on the platform of the Peoples Democratic Party, PDP, vying for the party’s ticket ahead of the November 16, 2019 governorship election in Kogi State. Melaye represents Kogi West Senatorial District in the National Assembly. The highly controversial senator had the most tortuous experience of his political career in 2018, facing unsuccessful recall initiated by Governor Yahaya Bello’s administration, alleged assassination attempts, several arrests and court cases instituted against him, climbing of trees to evade arrest, hide and seek game with security agents and above all, his resounding victory at the just concluded National Assembly elections. But all these, rather than diminish him, further enhanced his popularity among his base and continue to boost his chances within the circle of the PDP.

Perhaps, if his adversaries had any inkling of his personality, they would not have engaged him in any dirty fight. This is because; the senator is immune to criticisms. He waxes stronger in time of crisis. A source described him as a ‘crisis profiteer’. At every forum, he always refers to himself as the man, who had conquered fear and prepared for any eventuality. He allegedly jilted Bello and the All Progressives Congress, APC, following the crisis of who becomes what in the administration of the then new government.

Melaye was elected senator on the platform of APC in 2015, after moving to the party from the PDP. He defected back to the PDP along with the immediate past President of the Senate, Dr. Bukola Saraki, in 2018 and contested for the senatorial position again. After he successfully prosecuted his senatorial ambition and the subsequent landslide victory at the poll, the senator decided to throw his hat into the ring to unseat Governor Bello, his arch political enemy. Melaye has pledged to revive the economy of the Confluence State in next four years. He said he decided to join the governorship race because of the hunger, poverty, starvation and killings foisted on the people of the state by the present government.

He lamented that the people of Kogi are suffering in the midst of plenty, noting that the state is endowed with both human and natural resources that can transform it to greater height, something that he said is not being done right at the moment. According to him, even if there is no more federal allocation, his administration will look inward, saying that necessity is the mother of invention. He added that Kogi State has 30,354 square kilometres of arable land for agriculture. The state, he said, is bigger than about 100 countries in different parts of the world. He decried the situation where people are afraid of government. Government, he added, is supposed to be afraid of the people.

Melaye warned that if the PDP fields a wrong candidate, it will lose the election, adding that if the opposition party is bent on winning back the state, it must present a credible candidate with the capacity to deliver and tackle all the challenges, facing the state.

He appealed to delegates ahead of the September 5, governorship primaries of the party to cast their votes wisely. He said that he has the capacity to dislodge the present APC government from the Lugard House, stating that his coming on board as governor would accelerate development in the state.

“I want to tell you that Dino Melaye is ready to fight APC and Yahaya Bello bumper to bumper, energy for energy. I want to assure you that Kogi West is going to produce the next governor of the state,” he said.

He admonished the party hierarchy to look within for the best aspirant with capacity, capability and ability to move the state out of the present hopelessness, arguing that one cannot offer what he doesn’t have.

He described some other aspirants vying for the party’s ticket as incompetent, noting that some of them are even waiting for their godfathers to raise their hands with endorsement. He said he does not have such a baggage.

“Ideas rule the world, ” Melaye said, maintaining that he had acquired a lot of experience and lofty ideas to move Kogi to a greater height.

“For instance, in 1980, Dubai did not use up to 16 per cent of its total land mass. But with great ideas the city has used up to 98 per cent of the land. After the death of the ruling monarch, the son took over and called all professionals around him to plan for a new Dubai. Today, the ideas have paid off and Dubai is one of the best cities in the world,” he added.

Dino commended the people of Lokoja Local Government for standing with him during the period of the recall exercise sponsored by the state government and for their support during the general elections that gave him victory to return to the National Assembly.

Meanwhile, youths from seven local government areas in Kogi West have charged political leaders, especially in the APC and PDP to support candidates from the senatorial zone for the governorship contest.

Arising from an emergency meeting in Kabba, the youths said it is time for the zone to produce the next governor of the state in the interest of peace, equity and justice. They said that the zone had made lots of sacrifices for the stability of the state in the last two decades.

Spokesperson of the group, Comrade Najeem Isiaka Bolaji, who signed a communiqué issued at the end of the meeting, said the youths would not hesitate to declare any leader from the zone as persona non grata if they go against the candidate of the zone in the incoming primaries of all the political parties.

According to him, the youths have carefully studied the present situations in the state before taking the decision. He said Kogi East has had its share and it would amount to immoral act for the zone to want to come back to power again.

He said ordinarily, the West would have supported Governor Bello for second term, but for his lacklustre performance, which earned him the label of the worst governor in the state in particular and the country in general.

“Even at a point, the paramount ruler of Ebira, Ohinoyi Ado Ibrahim, spoke against Governor Bello’s second term. As it is today, Governor Bello’s kinsmen are not proud of his achievements,” he added.

He appealed to leaders from the zone, including former senator, Smart Adeyemi, Prince Shola Akomode, Olumoroti Olushola, Saidu Akawu, Mabo Kassim, Hon. Adedoyin, Hon. Shabban Shuaibu and others to rescind their decision and support Kogi West candidates in the overall interest of the zone.

The spokesperson said the youths are proud of Dino Melaye and Mr. Babatunde Irukera and commended them for their courage in showing interest to contest the governorship election.