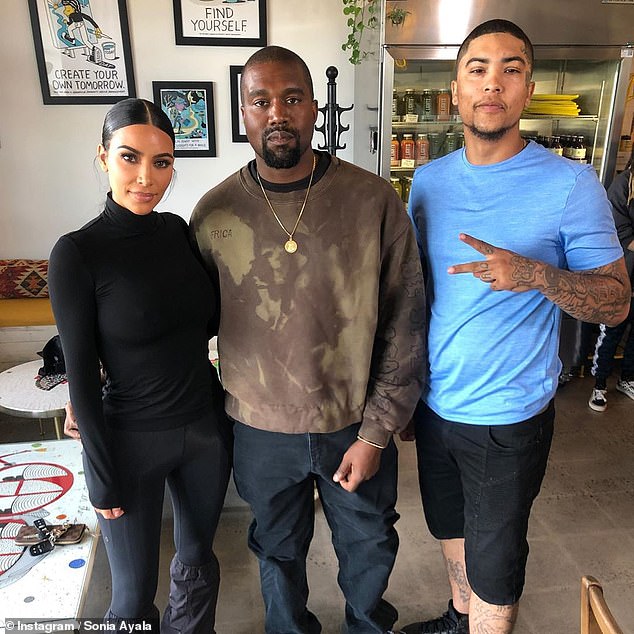 This gesture came after it was revealed Kim Kardashian had reportedly helped free as many as 17 inmates by secretly funding a criminal justice campaign.

Algarin, a twin, was charged in 2013 with bringing guns to a Fayetteville high school.

The couple met Algarin and his family in Charlotte after his release from Central Prison in North Carolina where he served seven years, according to TMZ.

His twin sister Azaria revealed that the family had lunch with Kardashian and West before starting the procedure of removing her brother’s face tattoos.

Azaria said: “recently my twin was released from central prison where he served an accumulation of seven years.

“He asked me for Kim’s address so he could send her a letter and I rolled my eyes and never sent it.

Eventually, my mom sent it for him so he would stop harassing us.

“Never in a million years did I think Kim would write him back (or even read his letter), fly in right after they met gala (not to mention her 4th baby is due at any minute),

“They invest in our family, laugh and relate to us over the smallest things.

“Kim flew in to CLT with her doctor to have lunch with us and went to MedSpa nearby to start the procedure of removing my brothers face tattoos,’’ she said.

Kim, Kanye and PaulSimilarly, the ex-convicts mother who provided her son, Kim’s address that propelled him to write her said, “It was a great day and also a long day coming.

“My children and I had the awesome opportunity to meet @kimkardashian and her husband @kanyedoingthings.

“Kim was there to grant a request that my son asked her assistance with which was to remove a tattoo from his face. Thank God she received his letter and was happy to grant his request.

“Her work and dedication to helping others restart their lives and move forward with a more positive start is something that I am extremely grateful for and most appreciative.

“Kim and Kanye taking time out of their busy schedules to come meet and sit with us was amazing and an experience we will always remember,’’ she said.

The 63-year-old was pardoned by Trump after meeting Kim at the White House.

However, with her criminal justice campaign, it hoped that such efforts would go a long way to reducing criminality and putting the young ones on the paths to a crime-free life in the country.
Tattoo removal is a procedure done to remove an unwanted tattoo.

Tattoo ink is placed beneath the top layer of the skin.

That makes tattoo removal more complicated and expensive, but however specialist could remove it without causing skin irritation or reaction. (NAN)