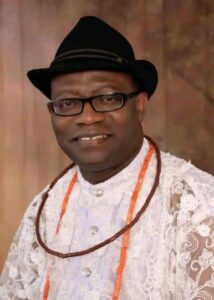 Olorogun Kenneth Oghenerhoro Okpara, an aspirant for the Delta 2023 governorship election under the Peoples Democratic Party (PDP), is reported dead.

Okpara’s death was announced, on Friday morning, by the Senior Special Assistant to the Delta State Government on New Media, Ossai Ovie Success.

According to Success, “We just lost governorship aspirant in Delta State under the PDP Former Commissioner for F inance and Economic Planning Delta State.

“My condolence to his family and the people of Urhobo Land,” Ossai added.

The late Okpara, is a former Commissioner for Finance and Economic Planning in Delta State.

However, details of Mr. Okpara’s death were yet to be made public by the family as at time of filing this report.