Kemi Badenoch, 4 others move to round 3 in race for UK prime minister 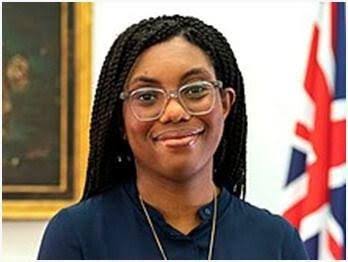 Contenders for the leadership of the Conservatives have further been pruned down after second-round voting on Thursday, with the Attorney-General Suella Braverman dropping out of the race.

Braverman received 27 votes, the least number in the second round ballot to produce a successor to the UK Prime Minister Boris Johnson, who resigned last Thursday as leader of the ruling party.

The five contenders will face further voting rounds among colleagues in the parliament from next Monday and the balloting will continue until only two are left in the race.

2023: Tinubu has what it takes to govern Nigeria –SWAGA boss

The Conservative Party members will vote to decide the winner among the last two contestants on September 5.
The race to occupy Number 10 Downing Street opened following the resignation of Prime Minister Boris Johnson as the party’s leader last Thursday.
Although Johnson will quit office, the country will not head to the polls until 2024. The Conservative Party that won the last parliamentary election will produce the new prime minister.

Forty-two-year-old Kemi Badenoch, member of parliament for Saffron Walden announced her bid for the British top job, expressing the wish to run a government with a centre-right vision.

Badenoch was born in 1980 in Wimbledon, London, to Nigerian parents, Femi and Feyi Adegoke. Her father was a medical doctor and her mother is a professor of physiology.

Badenoch’s childhood included time living in the United States (where her mother lectured) and Lagos, Nigeria.
She holds British citizenship owing to her birth in the United Kingdom. She returned to the UK at the age of 16.

Badenoch held the position of equalities minister in the Boris Johnson cabinet. She resigned from the government in the thick of the integrity crisis that forced Johnson to quit as the Conservative party leader and prime minister.

2023: Tinubu has what it takes to govern Nigeria –SWAGA boss