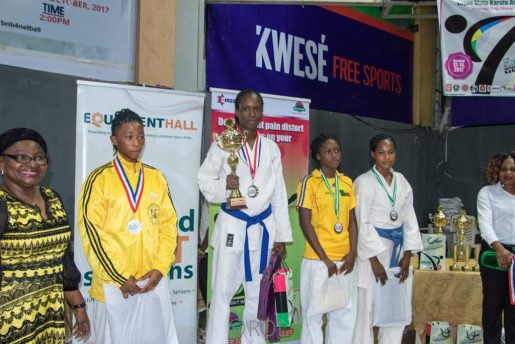 Aderonke Ogunsanwo, a Karate National Champion has advised females to develop more interest in Karate as a means of self-defence.

Ogunsanwo, a champion in the 50kg category, gave the advice in an interview with the News Agency of Nigeria (NAN) in Lagos on Tuesday.

She said that females were more at risk of possible male harassment and attacks.

Ogunsanwo said that it was not a bad idea if everyone engaged in the sport, as it helps to imbibe self-control and shape ones’ lifestyle.

“Karate to me is a way of life. It teaches respect, self control, honesty and generally shapes one’s life.

“Basically, it is essential for every person to have an idea of self-defence.

“Considering the dangers most females are exposed to in the society, taking Karate classes will teach and prepare them to defend themselves and in the larger picture, it is also a career,’’ she said.

Ogunsanwo, who won a gold medal at the Nasarawa Open Championships in April, said that she hoped to make the final team selection for the African Games in Morocco.

“The work continues and I have to be in top form to make the final team and ultimately win a medal in Morocco,’’ she said.

She said that lack of exposure to international competitions was affecting Karatekas’ ranking in the world, saying that everything had to do with finance.

“The major problem we are facing is lack of exposure to international championships which boils down to the fact that we don’t have sponsors to fund these trips.

“If funds are available to go for events, national athletes will get better and gain more experience which will eventually boost our world ranking.

“Attending and winning international rating championships is the only way to achieve featuring at the Olympics.

“Athletes around the world travel around to earn points to qualify for the Olympics. If we can get the desired exposure, then Nigeria is ready to be represented at the Olympics,’’ Ogunsanwo said.

She said that it was every athlete’s dream to compete in the Olympics.

“They should enjoy the art and be happy practising it before looking into financial gains.

“Most of the athletes coming up now are just after what they can get financially immediately without really understanding the art,’’ she said. (NAN)