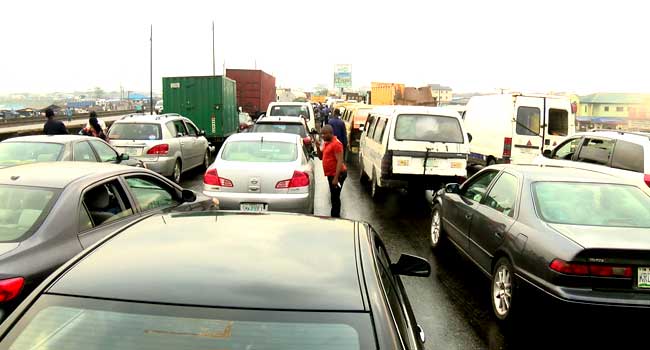 The Federal Ministry of Works and Housing, supervising the reconstruction of Kara Bridge to Isheri Junction on Lagos-Ibadan expressway, says new barriers are being laid to check reckless driving within the project site.

Mr Kayode Ibrahim, an engineer from the ministry supervising the project, made this known to the News Agency of Nigeria (NAN) on Monday in Lagos.

Ibrahim told NAN that the barriers were to redirect traffic where reckless motorists were disobeying traffic rules thereby causing disruption to traffic flow.

According to him, “every day we encounter new issues arising from reckless driving and we try to solve them.”

“We will continue to adjust and readjust as the project progresses,’’ he said.

Ibrahim lauded the various traffic regulatory agencies for their efforts in taming the daily traffic gridlock at the project site.

On the project, the engineer said that the contractors had finished milling the asphalt, adding that the earthwork and U-channels were being done.

But some road users decried the continued traffic gridlock at the project site, which they said, had made motoring uninteresting.

NAN recalls that the section between Kara Bridge and Isheri Junction inbound Lagos was partially closed on Sept. 2 for reconstruction with the traffic diverted to the outward bound side of the bridge.

The traffic gridlock at the site, which is more than 600 metres stretch, has brought untold hardship to motorists.

Mr Dare Dada, a civil servant who lives in Arepo, told NAN that he spent about seven hours on the way to work on Monday because of the traffic congestion.

An auditor, Mr Lawrence Okoineme, told NAN that many commuters, who could not afford the high fare occasioned by the gridlock, resorted to walking by the roadside.

According to him, commercial motorcyclists are feeding fat on commuters as they charge N500 per drop instead of N200, while commercial bus drivers collect N250 instead of N100.

Okoineme appealed to the Federal Government to take urgent measures to ameliorate the hardship. (NAN)

Why you should include lemon in your daily food plan