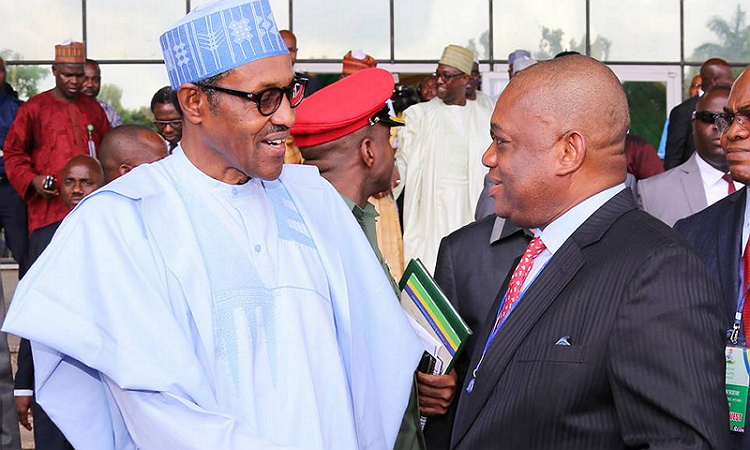 A former Abia Governor, Dr Orji Kalu, has urged President Muhammadu Buhari to intervene in the dispute between the National Chairman of the All Progressives Congress (APC), Mr Adams Oshiomhole and his predecessor, Chief John Odigie-Oyegun.

Kalu made the plea on Friday while speaking with newsmen at the Murtala Muhammed Airport 2, Ikeja, Lagos State.

He said the intervention of the president was needed to restore peace to the party leadership and ensure that APC remains focused on delivering its manifesto to Nigerians.

Kalu said “What is happening between them is the beauty of democracy because we agree to disagree.

“However, we are calling on Buhari to intervene just like the way he did in the Sen. Danjuma Goje and Sen. Ahmed Lawan matter which has seen Goje stepping down for Lawan for the Senate President position.

“Before, the president will say I don’t want to play politics but he is the chief politician and he has started changing his mind to intervene in such cases.

“So, I am sure that we will sort out Oyegun and Oshiomhole’s problems before next week with the intervention of the president and I am sure he is already working on that.”

He, however urged some politicians to desist from using the name of the president to push their own agenda, stressing that Buhari’s integrity had remained intact despite their antics.

The Senator-elect for Abia North on the platform of APC also insisted that he was still in the race for the position of the Deputy Senate President in the Ninth Senate.

He said ” I am not only restating it but I am saying that it is the most godly thing to do because I am ready to do that job to help the Senate in law making and help the executive to bring stimulus that would heat the economy.

“I am interested in the economy heating up because if we get the economy right, the insecurity that we are facing now will go away.

“Also, we need to look at candidates that have capacity to do the work and I have that capacity.

“Capacity to help the president actualise his economic goals because we need to put the Nigerian economy on track.”

Kalu assured Nigerians that the Ninth Senate which would be inaugurated on June 11, would engage in robust lawmaking and would not be a rubber-stamp assembly.

He also expressed confidence that Lawan would clinch the position of the senate president and that the lawmakers would work in harmony with the Executive to deliver the dividends of democracy to Nigerians. (NAN)