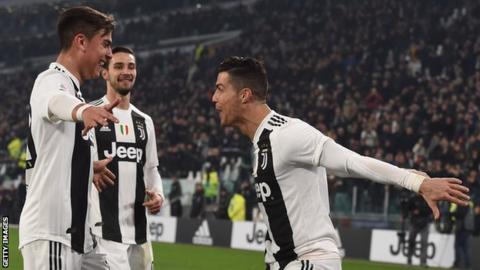 Unbeaten in the league with only six points dropped and 13 points clear at the top, Juventus have been utterly dominant in the Serie A this season and seem all, but certain to win an eighth successive title.

But, for all their ruthless efficiency, the Turin side who have the best attacking and defensive records in the league have done no more than what is expected of them.

The addition of five-times World Player of the Year Cristiano Ronaldo, even at the age of 33, to a team that had already won the last seven Serie A titles, has effectively turned winning Serie A into an obligation.

Their real challenge is seen as winning the Champions League and, in that sense, their season starts in earnest on Wednesday when they visit Atletico Madrid for the first leg of their round of 16 tie.

READ ALSO: Mummy, why do you call everybody sweetheart?

Juventus coach, Massimiliano Allegri, who saw his team beaten in both the 2015 and 2017 finals, has tried to play down expectations.

“It’s not the case that Ronaldo has come in and we’ll win for certain,” he said recently.

“It takes respect too. We’re working to win, but there are the other teams who want to win as well.

“It would be madness to say that we are runaway favourites to win the Champions League. We have an objective, to bring home the trophy if we play well and are lucky.”

However, many believe the season will only be considered successful for Juventus if they lift the trophy at the Wanda Metropolitano stadium in Madrid on June 1 the same venue where they face Diego Simeone’s Atletico on Wednesday.

“When you keep winning in Italy, you know that you have to do something a little extra and that little extra is called the Champions League,” said former Italy defender, Marco Matterrazzi in an interview with Eurosport.

“Juventus are always strong in the Champions League because they are obsessed with winning it,” added the 2006 World Cup winner, who spent most of his career with Juve’s bitter rivals Inter Milan.

“Now, they have signed a player who has no equal in the Champions League. If they don’t succeed in winning it even with him, it will be a failure. When you buy the world’s best player, you expect to win the competition.”

Juventus Vice-President and former player Pavel Nedved, said winning the title may help ease the pain of 2003 when he missed the final through suspension and had to watch as his side lost on penalties to AC Milan following a 0-0 draw.

“I wanted to win it but couldn’t win it as a player, but if we manage to win it while I am part of the club that would be absolutely wonderful, it would be a remarkable achievement.

“And so then, I could rest in peace,” he told the Daily Telegraph. (NAN)