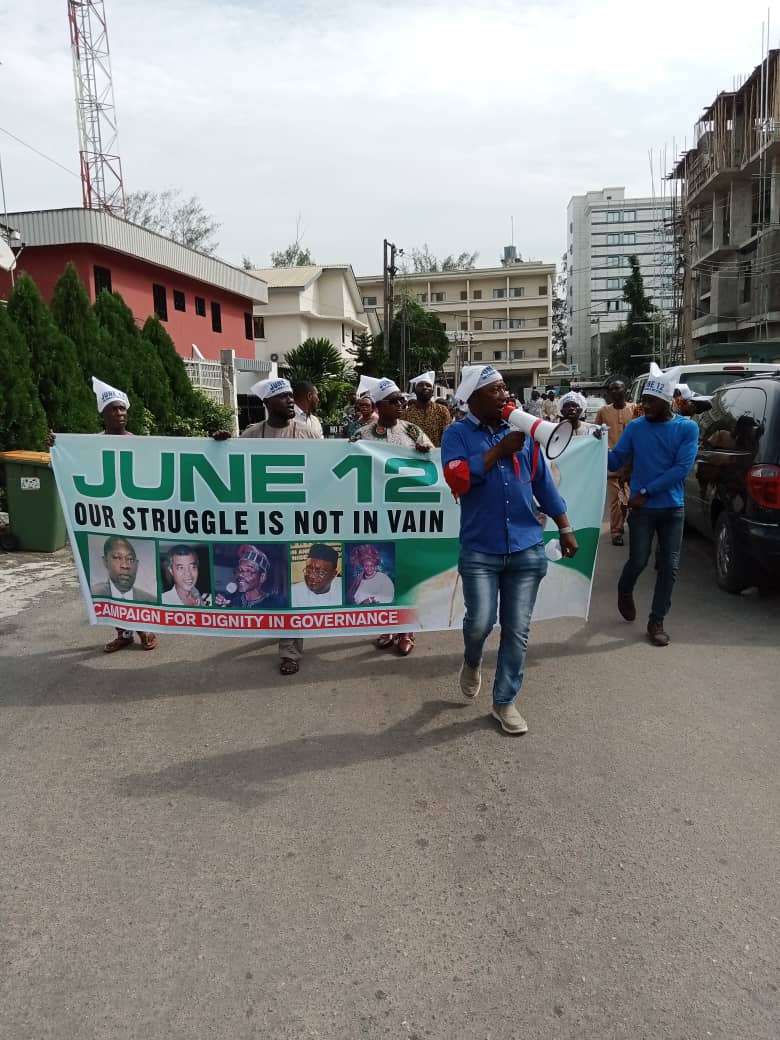 As Nigerians from all works of life troop out at the weekend to celebrate the 28th anniversary of the June 12, 1993 presidential election annulled by the military regime of Gen. Ibrahim Babangida (rtd), an activist and pro-democracy fighter, Comrade Razaq Olokoba, has given the Lagos State Governor, Babajide Sanwo-Olu a pat on the back for keeping the flag flying.

Olokoba’s commendation came during an interview with our reporter during the anniversary rally at the Opebi Roundabout, Ikeja, near MKO Abiola house, where he stated that, governor Sanwo-Olu is one of the few leaders that has been acting truly as someone who doesn’t want the June 12 struggle be in vain.

According to him, one can attest to the genuine effort of the Lagos state government under the able leadership of Sanwo-Olu in bringing into reality the dividend of democracy to the people, admonishing that, “We must continue to uphold every tenet of our Democratic culture, values and morals to arrive at the Eldorado of a future envisaged by this present Sanwo-Olu Administration in Lagos State.”

While vowing that the unjust annulment of June 12, 1993 election will forever remain a watershed in the history of the people, the renowned activist, reminded that, “It was that singular event that brought to the fore the undying commitment of the oppressive and evil Nigerian ruling elite led by the Nigeria oligarchy to keep our people in perpetual bondage without deference to exercise of their democratic and fundamental rights.”

Speaking further, the unbowed right crusader added that, “It was also this and subsequent reactions on the part of the people that land-marked the resolve of our people to fight the military with unequal determination, leading to the termination of military rule in 1999,” regretting however that, “since 1999,  there have been unrelenting efforts by the elite and military men in civilian uniform to wish away the gains of June 12, appropriate the political import and turn the event into a mere icon!”

Olokoba therefore gave kudos to the government for the recent declaration of June 12 as a public holiday a result of stringent public demand, observing that, “the step was in a way an indication that our struggle is not in vain and that June 12 is a popular struggle.”

He expressed that delight that, “the struggle is a popular struggle, fought and won on the streets, and cannot be allowed to be closeted in the boardroom or confined to gardens and parks, warning that, “it would amount to be opportunistic, evil and unacceptable from anybody to be preside over the worst form of insecurity in Nigeria with ethnic cleansing and genocide as order of the day while paying lip services to the memory of Basorun MKO Abiola and the memories of those who died in the June 12 Struggle.”

June 12 Struggle disclosed at its height, Olokoba informed, meant only two things to the people: End to military rule and good life under a democratic dispensation with opportunities for self-actualization, regressing however that, Nigerians live in conditions defined as poverty capital of the world with cities ranking as the worst to live in after places like Damascus the capital of war torn Syria.”

He equally lamented that, unemployment rate of 35 per cent and life expectancy of less than 52 years are definitely not enviable statistics, regretting that, “We live today in a country where seeking education by going to school has become a sin as students and teachers are being kidnapped and put up for ransoms!”

Concluding, the vocal public analyst therefore urged the good people of Lagos State and beyond to keep on giving Sanwo-Olu maximum support to encourage him to do more just as he called on the governor to see the people’s support as a clarion call to do more.