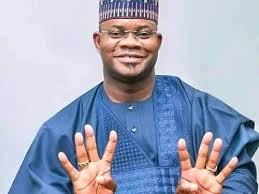 The final announcement of the result was put on hold, on Sunday evening, after results in 19 out of the 21 council areas were released by INEC.

The commission said they were still awaiting results from Lokoja and Ibaji council areas. It also added that clarification on result from Dekina was needed.

However, with the results announced on Sunday, Bello of the All Progressives Congress was cruising to an easy win over the candidate of the Peoples Democratic Party, Musa Wada.

After announcing the remaining results of the poll at INEC office in Lokoja on Monday, Returning Officer, Prof. Ibrahim Umar, said Bello had a total of 406,222 votes to defeat his closest rival, Wada, who polled 189,704 votes.

Umar said, “Bello Yahaya, having scored the highest number of votes, is hereby declared the winner and therefore returned.”

But after the announcement, PDP agent refused to sign the results declared by INEC.

The party had, on Sunday, dissociated itself from the result, with Wada alleging irregularities and voter intimidation by “APC thugs,” and statewide violence during the conduct of the poll.

He described the figures announced by INEC as ‘fictitious.’