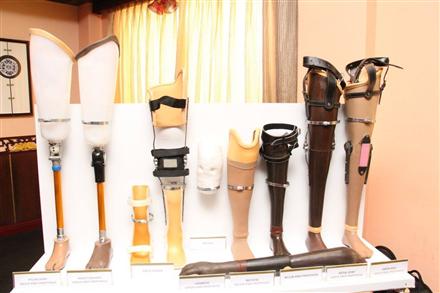 An Indian Foundation (Ishk Tolaram Limbs Centre) has donated 2,000 Artificial Limbs to the people with special needs in Kaduna State.

Mr Jaiprakash Bidlan, Senior Technicians and Branch Admin officer of the Centre, said the foundation decided to give free artificial limbs to the people who “cannot afford the limbs in Kaduna’’.

Bidlan said the foundation had about 98 beneficiaries who needed the artificial limbs and the articles would be given to them on Friday.

“But we are targeting 2,000 people and the registrations is ongoing and when it is completed we will give the limbs to all the 2,000 people,” he said.

He said the organisation was also getting its support from other groups of companies.

According to him the limbs will last for years when used properly.

“But its depend on how the beneficiaries use it; if it is used on bare foot it will not last more than two years but if it is used properly it lasts longer,” he said.

He said the company has been assisting the less privilege with artificial limbs all over Nigeria adding that no fewer than 15,000 people had has so far benefited from the gesture.

He said the programme was a continuous process and the organisation would continue to assist people in Nigeria.

He said if the government could give them support the organisation would be able to provide more functional limbs which would enable the beneficiaries to walk again.

The Commissioner for Women Affairs and Social Development, Hajiya Hafsat Baba, said the organisation was in Kaduna in March to take the measurements of the beneficiaries.

Baba said the gesture was part of its corporate social responsibility and described the organisation as good friend of the state.

“Due to good relationship with Gov. Nasiru El-Rufai the organisation promised to provide children and adults with artificial limbs.

“So they came last month and took the measurements.

“You could see children who are in need of either limbs or arms,” she said.

She extended the gratitude of the state government as well as the beneficiaries to the company for the gesture.

She emphasised that the donation was free.

Yahaya Abdullahi, one of the beneficiaries, thanked the organisation for giving him artificial limbs and also thanked the Kaduna state government for facilitating the efforts to ensure they benefited from the gesture.(NAN)