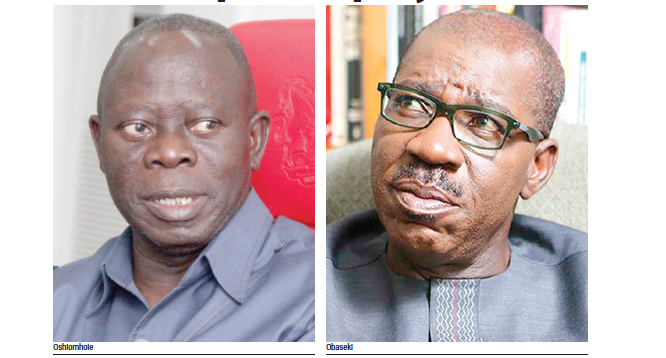 The protracted feud between Governor Godwin Obaseki and his political godfather, Comrade Adams Oshiomhole is assuming life threatening dimension.
There is an air of uncertainty hovering over the state with the possibility of the situation getting messier ahead of the primaries of the ruling All Progressives Congress, APC.
Indeed, it would be an understatement to say that there is no solution in sight to the protracted feud as both Oshiomhole and Obaseki have thrown caution to the winds, not minding the dire consequences their seeming irreconcilable differences portend for the party during the 2020 governorship election proper.

READ ALSO:http://Iran’s vice president infected by Coronavirus
Residents in the state now live in perpetual fear following rampant cases of violent attacks and the use of explosive devices on residential homes of perceived political opponents.
This is a new low in the state’s political trajectory and observers are worried as to where it would all end.
Governorship aspirants loyal to Oshiomhole in the Edo Peoples Movement, EPM, including Pastor Osagie Ize-Iyamu, Dr. Pius Odubu, Rt. Gen. Charles Airhievhere and Mr. Chris Ogiemwonyi have reportedly reached accord to settle for any one of them in the attempt to oust Obaseki from Osadebey Avenue Government House at all cost during the party’s primaries.
It is not clear yet, which of the factions is having the upper hand in this endless fight. The Oshiomhole group recently received into its fold, thousands of defectors from the Peoples Democratic Party, PDP, in Auchi, Etsako West Local Government and Opoji, Esan Central Local Government Area of the state, in defiance of the ban placed on rallies in the state by the Obaseki-led administration.
The entire state was literally under siege last week, following alleged assassination attempt on the founder and chieftain of EPM and former Attorney General of the state, Mr. Henry Idahagbon, when his law chamber, located on Siluko Road, Benin City was allegedly attacked by unknown gunmen.
While the dust raised by the attack on Idahagbon’s chamber was yet to settle, another party chieftain, who is also a die hard loyalist of Oshiomhole and former youth leader of the party in the state, Chief Francis Inegbeneki, had his Benin City, GRA residence bombed with suspected explosives device.
The chains of violence extended to Edo Central, precisely ward 3 in Esan West Local Government, where a former PDP House of Assembly aspirant, Mr. Clifford Inegbedion and his loyalists were reportedly attacked, while perfecting plan to defect to the APC.
Apparently not at ease with the growing gang up to thwart his second term ambition, Governor Obaseki, who had earlier declared that the war with Oshiomhole is a fight to the finish, accused the national chairman in a petition to the Inspector General of Police and the Director, Department of State Services, DSS, of allegedly perpetrating breakdown of law and order in the state and demanded his immediate arrest
“Oshiomhole is not above the law. He should be arrested for violating the state government’s order. He was a governor before and he knows that nobody violated his orders as governor, because it is not about him, it is about the state. When everybody disobeys laws, then the country becomes a Banana Republic-God forbids,” the petition reads in part.
The state Deputy Governor, Comrade Phillips Shaibu, while fielding questions at the Police Headquarters, Abuja, although said Oshiomhole remains his political father, he, however, dared him and his group.
“They say they want to run illegal rally in the state to escalate the crisis. We are waiting for them. Let them come to the state again to hold a rally and cause destruction. We will show them that God has given us peace and God will deal with them.
“Edo is a peaceful state as we don’t like bloodshed. As a government, we have tried to maintain peace and avoided issues that will cause distraction. The problem today is that some people are trying to play God, but they are not God,” Shaibu said.
Whatever the party’s national executive is doing to resolve the crisis has yet to penetrate the rank and file of party in the state. The two political gladiators have continued to engage each other in war of words in the face of increasing violence in the state. Governor Obaseki said the use of explosives and other dangerous weapons were orchestrated by Oshiomhole and his EPM group to create tension in the state with the intent of forcing the authorities to declare a state of emergency in the state.
But Oshiomhole’s loyalist and former Speaker of the state House of Assembly, Rt. Hon. Thomas Okosun accused Obaseki of being the one responsible for the state of insecurity in the state.
He said: “Who is really the threat to security in the state? It is obvious that Obaseki and his group are the real threat to the state. It was through rallies we made him a governor four years ago. We will not allow Obaseki to destroy the party. How do political parties conduct themselves if not through rallies?
“We gave Obaseki opportunity to plead and beg for second term ticket but it is too late now. What Obaseki has done to Edo APC and its leaders is to leave a permanent scar with us.”
On his part, Chief Inegeneki described the attack on his resident as state sponsored terrorism. He said: “We are going to come out stronger after the primary. The EPM members constitute about 90 percent of APC. The others are Obaseki workers. They are still with him because of daily bread, they will soon join us.
“But, let me warn those people who threw explosives into my house and their sponsors; this drum of war you people are beating now by the time the lyrics start coming out, be ready to dance to the music of war (makossa).”
Also the state party chairman loyal to Oshiomhole, Imuse David and other stakeholders at a rally in Opoji, while condemning the onslaught of violence in the state, called on Governor Obaseki to refrain from his utterances, statements and actions capable of belittling the office of a state governor. This followed the governor’s alleged threat to deal with the Oshiomhole.
Idahagbon has also promised to fight the ongoing war to a logical conclusion along with others.

READ ALSO:http://Osinbajo presides over NEC meeting
He said: “Democracy is a contestation of ideals. We disagree to agree. We don’t have to kill each other. When people disagree with you as governor, you go to them. No man will continue being angry in the face of such humility by the governor.
“I remain resolute. I will not run away; we will not plan to kill anybody. I have no regret for starting EPM on May 12th, 2019 to rejuvenate and sustain the party and return it to its winning ways and secondly to shop for suitable replacement for Obaseki and by the Grace of God, come November 2020, there will be a new governor in Osadebey Avenue.

Attack on my house is state sponsored terrorism -Inegbeniki