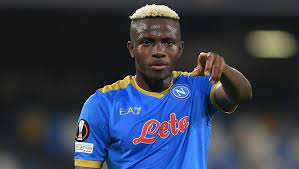 Osimhen, who was injured after a clash of heads during Napoli’s defeat at Inter Milan in November, was initially ruled out of action for three months.

But in a statement on social media, the U-17 World Cup winner said he will be available for the tournament billed for next month in Cameroon.

“I will be available for AFCON 100% unless I’m not among the players picked to represent Nigeria,” he wrote.

“Victor Osimhen was operated on this morning by Prof. Tartaro, assisted by dr. Mario Santagata and in the presence of dr. Canonical, for a reduction and restraint operation of multi-fragmentary and displaced fractures of the malar bone, of the zygomatic arch and pommel, of the floor and lateral wall of the orbit, and of the diastasis of the frontal-zygomatic suture;” the club said in a statement. The prognosis is estimated to be around 90 days.”

Osimhen’s comment would be a major booster to the Super Eagles fans and interim coach, Austine Eguavoen, as they prepare for the continental showpiece.

Nigeria, in Group D alongside Egypt, Sudan, and Guinea Bissau, would begin the quest for a fourth AFCON title against the Pharaohs on January 11th.