Ile-Arugbo: Saraki fails to convince Govt. for out of court settlement 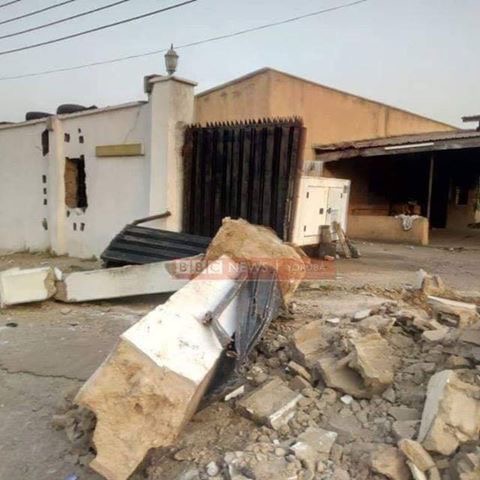 The well celebrated out of Court settlement and requested peace meeting with government by the lawyer to the Saraki’s family over the demolished ‘Ile Arugbo’ has failed.

The Saraki’s political office otherwise called ‘Ile Arugbo’ was demolished last January by the Kwara State Government on the grounds that the land on which it was built was allegedly acquired illegally.

Government at the time said the land on which ‘Ile Arugbo’ was built was applied for by one Asa Investment Limited which was allegedly not paid for till date.

The Company had however, went to court to challenge the demolition of Ile Arugbo but it’s legal team later requested to settle out of court leading to series of meetings that was deadlocked at the end.

The Ilorin  High Court sitting in Ilorin on Monday on the matter has therefore  fixed March 25, for definite hearing because the parties involved had refused to come to agree on terms of settlement.

Justice Abiodun Adebara while fixing the date, commended the efforts of the parties in their meetings for settlement.
Adebara however said the case had to continue to save time, effort and for justice to prevail.

Counsel to the claimant; Asa Investment Limited  Abdulazeez Ibrahim, had earlier told the court that efforts to settle the case amicably had reached a deadlock, and agreed to the commencement of the  hearing of the case.

He had told the court that; “We proposed three terms of settlements; first is for government to withdraw legal revocation, that is, right of occupancy of the claimant
“Second, government should rebuild the partially demolished structures in the land of dispute, and third, government should render public apology to aged women, who were harassed and traumatised,” Ibrahim said.

He said that the claimant also proposed one term of settlement, which was in conflict with their first term of settlement.
“In the last adjourned date, they asked us to shift grounds, so we agreed to remove the second and third terms of settlement and government is ready to remove revocation, we will rebuild it ourselves,” he said.

In a response, counsel to the state government, Salman Jawando confirmed that settlement had broken down, saying; ”the claimant said they are expecting to hear from us, but we told them not to
“We made them understand that their terms are impossible and they also made us to understand that their first term is not negotiable, so there is no point talking
“I made them to understand from the beginning that we are negotiating to the best interest of the government and not individual or company,” Jawando said.