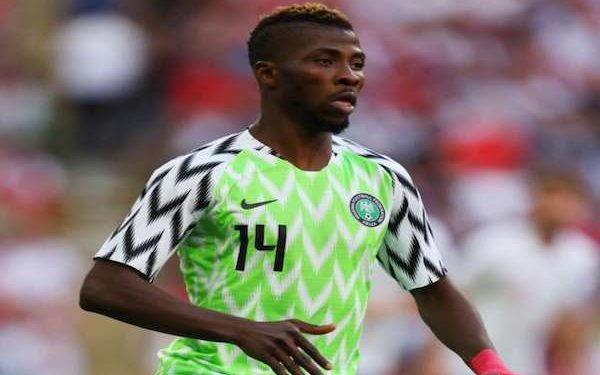 Ex-international Edema Fuludu on Monday said that the exclusion of Super Eagles striker. Kelechi Ihenacho from the 23 man list by Coach Gernot Rohr didn’t come as a surprise to him.

Fuludu, a member of the victorious 1994 AFCON squad, made the assertion in an interview with the News Agency of Nigeria (NAN) in Lagos.

“I wasn’t surprised really, he’s not in his best form, and if you are not in form there is nothing anyone can do about it.

“I believe the coach gave it serious thought; why take a player who is struggling when you have those that are in top form.

“He needs to give players fair opportunity, Ihenacho being on the list would have come as a shock to many.

“Because the coach made it clear that players performance at club level will determine players inclusion in the AFCON list.

“Kelechi has not been fantastic, but this happens to players at some point in their career, it’s just sad that it came at a time when he would have been valuable to the team if he was in great form,” he said.

The Leicester City forward Iheanacho has been dropped by Super Eagles coach Gernot Rohr ahead of Nigeria’s campaign at the 2019 Nations Cup in Egypt.

Asked about his views about Rohr’s selected player for the Nations Cup, the former Julius Berger player, told NAN that the selected players should justify their inclusion.

“There is nothing I’d include or take out from that list, only a coach knows and understands the strength of each of his players.

“I just want to urge the selected ones to make their inclusion count by playing cohesively and listening to instruction and also being disciplined will help them,” he said

Semi Ajayi, who plays for English Club Rotherham FC was also reported to have been dropped by Gernot Rohr who was not impressed with his performance.

At the just-concluded Premier League season, Iheanacho struggled for form and was left on the bench for most games for his club.

He got a chance to face Manchester City in week 37 of the Premier League season and saw a good chance to score against Pep Guardiola’s men which could have ended their title hope.

The rest of the squad will travel for the tournament which kicks off June 21, in Egypt. (NAN)