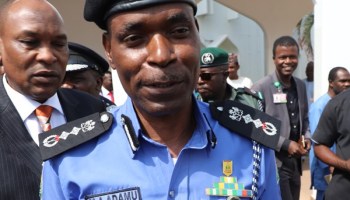 The Acting Inspector General of Police (IGP), Mr. Mohammed Adamu, on Friday, reiterated the determination of Nigeria Police Force to implement community policing in the country.

Adamu made this known at a meeting with Civil Society Organisations (CSOs), Non-Governmental Organisations (NGOs) and Human Rights groups and other critical stakeholders in Abuja.

He said that the police under his watch, would operate all-inclusive policing system and that they were open to constructive criticism to deliver on their mandate.

The police chief said that no police anywhere in the world could survive or perform its core mandate effectively without the support and cooperation of the people.

“The police alone cannot do this; we need your assistance, cooperation and support as major stakeholders in achieving these objectives.

“The police is not your enemy, our common enemy is lack of understanding of our common objectives and this is why this meeting is convened for us to bridge the gap,’’ he said.

On his part, Minister of Information and Culture, Alhaji Lai Mohammed, said that there was always need for interaction between the three arms of government and NGOs.

He noted that quite often, there was always misunderstanding between non-governmental organisations and government.

“I believe that we are all working towards same goal – virile, strong country,“ he said.

According to Mohammed, with the meeting, we can disabuse our minds about the roles of each and every one of us.

Speaking on behalf of the groups, Dr Benson Olugbuo, Executive Director, CLEEN Foundation, suggested that community policing should be inclusive.

“It is a partnership between the public and the police. So we feel it should be encouraged,’’ he said.

He said that military involvement in internal security in 36 states of the federation raised a lot of issue in terms of the security arrangement in the country.

“ It is a lot of responsibility because security management in Nigeria lies on the shoulders of the Nigeria Police Force.

“The law is very clear that the police have the responsibility to maintain law and order and the law makes it possible that policemen should also be involved in military operations, especially in terms internal security,“ he said.

Olugbuo noted that some of the challenges confronting the police were self-inflicted while some were as a result of the legal framework currently in use.

“We are aware that as at today, the law that established the force was bequeathed to us by the colonial masters,“ he said.

Olugbuo said that there was a need for the IGP to have a tenure of office as it was done in other government agencies.

“We believe there is need for security of tenure, because we believe that the primary responsibility of the Nigeria Police Force is to maintain law and order,’’ he stated. (NAN)