If Igboho, Kanu hailed from the North…

It is no news that Nnamdi Kanu, leader of the Indigenous People of Biafra (IPOB), was captured abroad and brought home to face his shit.

He continued to face trial, having fled into exile after his family home in Abia State was raided by local security forces. This happened while he was on bail. The drama of his recapture has remained on the front burner.

We shall return to the Biafra matter.

Numerous Nigerians rightly think that if it is possible to capture Kanu outside the shores of the country, rounding up these local bandits (a loose term for kidnappers, armed robbers, cattle rustlers, and sundry armed militias) operating in the northern region, should be a piece of cake. The reverse is the case.

The Department of State Services, in a Gestapo style and about 1 am some days ago, invaded the residence of Yoruba activist, Sunday Igboho.

Though he escaped the raid, his house and cars were riddled with bullets while bloodstains were reportedly splattered on the floors of the house.

The secret police, which had since declared Igboho wanted, said they killed two of his associates in a gun duel while 13 guards and close associates were later paraded in Abuja.

Now, while these bandits, mostly Fulani men who kill, maim, burn down communities, and displace innocent Nigerians from their ancestral homes, are freely carrying out nefarious activities in the north and gradually moving to the south, a Sunday Igboho, whose real name is Sunday Adeyemo, as well as Nnamdi Kanu, are easily apprehended, humiliated in the South for agitating for self-determination!

Igboho is being accused of stockpiling weapons to allegedly destabilise the country under the guise of agitation for the Yoruba nation, but he has since denied the allegation, saying he protects himself with charms and not weapons. The presidential spokesman, Garba Shehu, tags him a militant who conducts acts of terror, adding that the regime won’t condone any acts by secessionists. Odiegwu!

Assuming Igboho and Kanu are all they have been accused of and, while not making a case for them except that their trial must follow due process, why are the same security agencies that have suddenly become so intelligent not been able to apprehend the so-called bandits that have been terrorizing in the north and other parts of the country?

The biggest threat that Nigeria has faced in the last decade cannot be Igboho or Kanu, but Boko Haram. Yet, the head of that deadly group that specializes in killing and maiming was never arrested until news broke that a rebel group from Chad invaded his hideout and killed him.

Although that was not the first time we would hear of his death, what we never heard of was that he was ever captured by the Nigerian security forces.

If invaders from Chad could get him, what had stopped our forces from doing the same for over a decade? Or was it just that there was no real intent to neutralize him… the same way one Sheik who goes about hobnobbing with and empowering the bandits is free, walking the streets today? If this Sheik had been a southerner, what do you think would have been his fate today? The answer, my friends, is blowing in the wind.

So back to Kanu, who was first arrested in October 2015. He is facing charges for alleged offences related to his call for the independence of Biafra comprising the southeastern region of Nigeria.

He was granted bail in April 2017 by Justice Binta Nyako, who had barred him from rallies and media interviews. He was also barred from gatherings of more than 10 people. In addition, Kanu was ordered to produce three sureties with N100 million each, who should include a highly respected Jewish leader since according to Justice Nyako, Kanu had claimed Judaism as his religion.

Other sureties should include a senior and highly placed individual of Igbo extraction and in the ranking of a senator, and a respected individual resident in Abuja with proof of ownership of landed property. 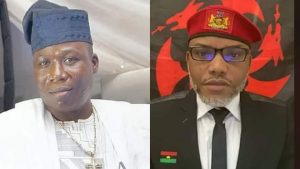 Above all, the London-based real estate agent was asked to surrender his travel documents, including his British passport to the court of justice.

After satisfying all the bailout conditions, Kanu was released only for some soldiers to raid his father’s palace in Abia State a year and some months after, which led to his fleeing Nigeria.

On October 19, 2018, Kanu was seen in Israel (Jerusalem), quelling the anxiety that he might have been killed during security officials invasion of his home. Needless to say, the three sureties were dragged to court by the Nigerian government claiming that the Biafra independence leader had violated the terms of his bail.

With his re-arrest, however, Kanu’s stalled trial following his disappearance while on bail regarding 11 count-charges against him, resumes. Justice Minister and Attorney General of the Federation, Abubakar Malami (SAN) made all these known at a joint press conference in Abuja shortly after the re-arrest.

However, the only formal information on how and where Kanu was arrested remains snippets from the joint press briefing with the DSS in Abuja, where Malami disclosed that international collaborative efforts with security agencies led to Mr Kanu’s arrest and repatriation to Nigeria. This point was reiterated by the Minister of Information and Culture, Lai Mohammed.

As usual, the rumour mill went agog with tell-tales. A tall tale of Kanu being arrested in Brazil while frolicking with women set as traps for him made the rounds. Another version held he was captured in the Czech Republic. Ethiopia also came into the mix, yet another angle had it that he was abducted in Kenya.

Kingsley also asked the British High Commission in Nigeria to insist on the immediate release of the Biafra champion.

Immigration and diplomatic authorities from Kenya said, however, they were not aware of the incident. Kenya’s Director-General of Immigration Services, Alexander Muteshi, actually denied his country’s complicity in the saga.

The United Kingdom, nonetheless, disclosed plans to seek clarification from the Federal Government and the circumstances surrounding the arrest. Through its Head of Communications, Dean Hurlock, the British High Commission in Abuja reaffirmed that Nnamdi Kanu was not arrested in the UK neither was he extradited from the UK. It noted, though, that the Foreign, Commonwealth & Development Office is standing ready to provide consular assistance to Kanu.

No doubt, the circumstances surrounding Kanu’s recapture have been the subject of speculation in the news media. As the Federal Government keeps mum on the details of the incident, the speculation continues to swell. For now, Nigerians have something to distract them from the more tragic issues in the land.

For instance, while the Attorney-General of the Federation was celebrating Kanu’s recapture on television, those they now call unknown gunmen or bandits were reported to have killed a Zamfara State parliamentarian, Muhammad Ahmad. The gunmen also abducted the MP’s son and driver.

The incident reportedly occurred at Sheme, Katsina, while the MP for Shinkafi Constituency in the House of Assembly was on his way to Kano after attending a rally to welcome Governor Bello Matawalle of Zamfara State and MPs who defected to the ruling All Progressives Congress (APC).

Since then, and of course, even before then, lots of heinous crimes have been carried out by the bandits, who have sustained the spate of abductions from schools and universities for ransom.

Even the lepers are not spared by the terrorists. At least eight people were abducted from the National Tuberculosis and Leprosy Centre, Zaria, in the early morning of July 4, 2021. Two nurses and a one-year-old were among those seized, said a hospital worker.

Reports of more abductions from a school near Kaduna city, about 80 km southwest of Zaria emerged on Monday. The mother of a 15-year-old girl who was kidnapped from Bethel Baptist School told the BBC that 140 pupils had been seized by a large group of armed men who arrived on motorbikes and broke down the fence.

A local Christian leader said there were 180 students in the school and that only 20 of them had been accounted for. He said, however, that some of them might have escaped.

The police version of the incident is that the gunmen “overpowered the school’s security guards and made their way into the students’ hostel where they abducted an unspecified number of students into the forest”.

How many buses, you would want to ask, ferried about 140, or more, school children into the forest without interception?

Anyway, the police statement said 26 people, including a female teacher, had been rescued.

The police further said the gunmen involved in the hospital attack in Zaria opened fire on a police station in the city. While they were engaged in a shootout with the police, another group attacked the hospital. Police claimed the attack on the station was a distraction while another group attacked the dormitories of the health centre workers. The group escaped with the victims into a nearby forest.

What a narrative in a country with the “excellent” forces that could capture Nnamdi Kanu in a foreign land. So we are told!

Since December 2020, that is, in seven months, more than 1,000 students have reportedly been taken with nine killed and more than 200 still missing (some of them as young as three) by criminals whom the authorities have termed bandits.

And that is just the tip of the iceberg, considering the near-complete breakdown of law and order, criminal activities, and bloodshed going on in the country today.

It does seem–I am open to correction–that the capture of the IPOB leader and Sunday Igboho excites the government of the day far more than the lives of the students and citizens who are traumatised daily by the increasing abductions. Some of the victims die in the process. What a country!