I want to bring back Nigeria professional  boxing glory –Ekundayo 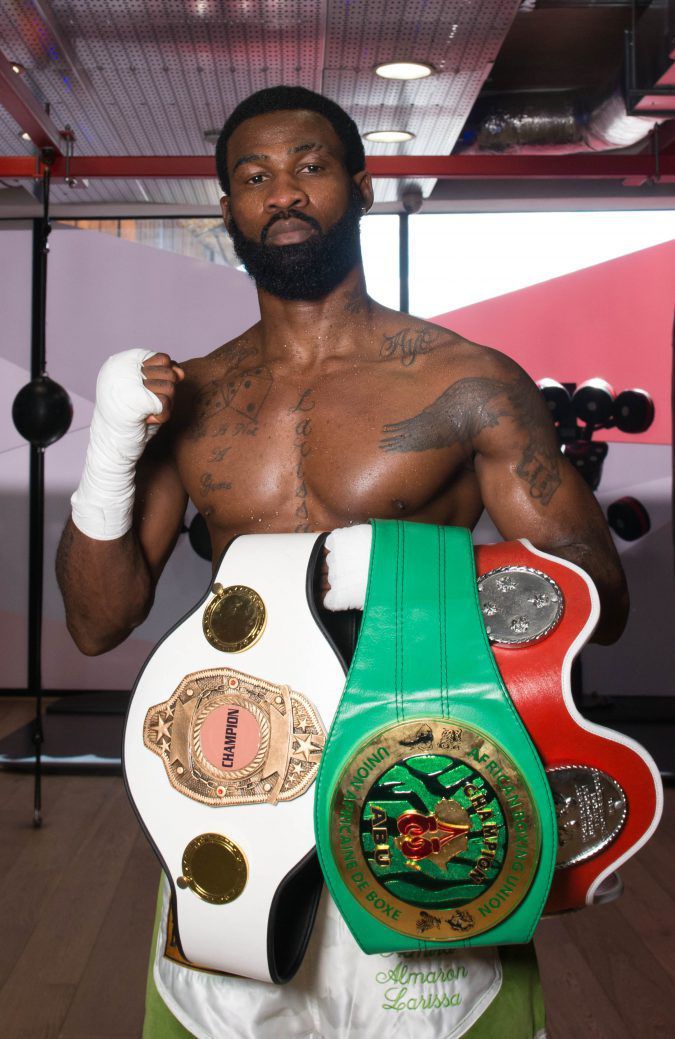 Share
London-based Nigerian boxer, Olarewaju Ekundayo, is the current International Boxing Federation ( IBF) European Welterweight champion as well as African Boxing Union (ABU) welterweight champion.
He is presently in the country with his team, soliciting for support to stage his next title defence in Lagos. In this interview with our correspondent, Ifeanyi Eduzor, he spoke on why he wants to defend his title in the country, state of Nigerian boxing and many more.
Can you give us a brief history of how you went into boxing?
I started boxing at a very young age in Mushin, a suburb of Lagos. There I joined Asemota Boxing Club at the age of 12. Later, I was selected to represent Lagos State in a national amateur boxing championship where I won gold. That was in 1998 and I also won gold at National Sports Festival at Bauchi in 2000. After that, I  continued with my amateur career for sometime before traveling to the United Kingdom about 20 years ago where I began my professional career.
It will also interest you to know that I represented Nigeria at the 1999 All Africa Games in South Africa and was also part of ‘Team  Nigeria’ to the 2002 Manchester Commonwealth Games where I finished as a quarter finalist.

You’ re planning to stage your next title defence in Nigeria, why did you choose Nigeria, considering that it is European title that you are holding?
Let me start by saying nothing says you cannot defend your title anywhere in the world. Remember the famous 1977 ‘ Rumble in the Jungle’ heavyweight fight between Mohammed Ali and George Foreman was held in Zaire now Democratic Republic of Congo and it attracted a lot of interest and viewership from all over the world.
But beyond that, what I want to achieve is to bring back the glory of professional boxing to Nigeria and also afford the youths the opportunity of seeing me fight because this was where I started and I am a proud Nigerian, who grew up in the Army Barracks at Oshodi by virtue of my father being a soldier. This is why I am soliciting support from government and corporate organisations for the fight to happen because Nigeria stands to benefit immensely.
Apart from this, I am also the African Boxing Union welterweight champion, which I defended on October 30, 2016 against Ghanaian boxer, Joseph “The Double Horror”, Lamptey.
It is also important to make people understand that although I am based in the United Kingdom, I have not forgotten my root and that accounts for why I always climb into the ring wrapped with Nigerian flag for people to know I am proudly Nigerian.

International Boxing Federation (IBF) is yet to name your opponent. Are you sure you’re capable of facing any opponent they come up with?
It will interest you to know that I won the European title on July 13, 2018 in London after defeating John Thain of United Kingdom and successfully defended it against another Briton, Louis Greene, on 14th of December, 2018 at York Hall, Bethnal Green, London. I am fully prepared to successfully defend the title for the second time, no matter who my opponent would be. I am not afraid of any fighter in the division because the general practice is that the boxing body will pick from the number one contender to number ten and I will beat any of them.

But assuming you’re unable to get sponsors before the June date, what will be your other plan?
I’ m optimistic that the fight will happen in Nigeria and we’re going to get the desired backing. My team is working round the clock to ensure they raise money for this all-important fight, which will be very beneficial to the youths of this country. However, if at the end of the day, my team is not able to raise the required finance, it will now be left to IBF to decide the next place to stage the fight.

What type of support do you need from government and corporate organisations, as you prepare for the fight?
The most important support is financial support because promoting such a fight requires a lot of money. Without money, you cannot get the venue, flight tickets and hotel reservations for those that will be part of the fight.
Boxing is a big business and any money spent will surely be recovered because of television rights and other advertisements that go with such a high profile fight. The media also has a role to play by showing my previous fights on television and making the necessary announcements and publications on radio and newspapers to create awareness about the fight.

What is your relationship with the Nigerian Boxing Board of Control (NBB of C) towards ensuring that the fight takes place?
The relationship is very cordial. As the sanctioning body, they have assured me of their cooperation towards ensuring that the fight takes place. I’ve already visited the President of the board, Dr. Rafiu Ladipo, and I’m in contact with the Secretary General, Yomi  Aboderin. We are all working as a team for the successful hosting of the fight. And as part of his support, Ladipo was at the ringside when I last fought in 2018. So, the relationship has been very cordial.

As a boxer who started his career in Nigeria, what are your plans to help upcoming boxers in the country achieve success?
I have a lot of plans and I’m beginning with the hosting of my title defence fight in Nigeria to make the youths understand that with hard work, they can achieve success. I also want to use the fight to serve as role model to them and show them that you don’t necessarily need to travel abroad to achieve success in boxing. It is also a way to keep them out of problems and other social vices in the society.
Having said this, it will interest you to know that I have helped many upcoming Nigerian boxers achieve their dreams. I don’t want to mention names or begin to blow my trumpet here, but I have contributed greatly to some of them, especially youths in my former neighborhood, become better citizens. They can testify to my magnanimity towards them and I will continue in my own little way to encourage them.

Are you satisfied with the state of Nigerian boxing and if not, what do you think should be done to make it better?
Nobody can say that he is satisfied with the state of Nigerian boxing. I say this because it’s disheartening that a country that has produced world champions in boxing in the past is now trailing behind other countries. It’s equally unfortunate that fights are rarely organised because of the absence of promoters and you cannot blame the promoters because no business man would like to run at a loss. It was this situation that accounted for some of us moving abroad to try our luck and if not that I’m in the United Kingdom, probably I would not have achieved what I achieved in boxing and even Anthony Joshua, if he had been in Nigeria, he would not have been a world champion today. I say this because over there, the environment is conducive, promoters are willing to promote fights because they will make profit and the necessary  encouragement is there for you to excel.
It’s important to state that Nigeria is blessed with a lot of talented youths both within and outside the shores of this country but they largely unknown. You know we always associate Brazil with football and Cuba with boxing but in the case of Nigeria, we’re everywhere and need to be encouraged.

Do you ascribe to the notion in some quarters that there is politics in boxing?
There is no area of life that politics is not involved and boxing is not an exemption. What many people don’t understand is that it’s not easy winning a fight when you are facing an opponent in his native country. You must have to beat him convincingly for you to be awarded the fight and at times, politics might deny you having a crack at the world title, especially when the holder of such title is convinced you can beat him and he will be using all sorts of excuse to avoid you just like they did to our own Segun Ajose.

Which fight would you say was your most memorable and most difficult?
My most memorable fight was when I won the European title. On that day, everybody at the arena was rooting for me, not minding colour, language and religion because they believed in me and knew the quality I was made of and I thank God I didn’t disappoint them.
My other memorable fight was the night I started my professional career in November, 2012 when I defeated three boxers to become the lightweight prizefighter champion in London and the first boxer to win 2000 British pounds on knockout basis.
However, my toughest fight was my only loss in 16 fights against Gary Concoran of United Kingdom in 2017 for the vacant World Boxing Organisation (WBO) intercontinental title. What happened was that he was avoiding me and later WBO told me I was going to fight another person. Unknown to me, while I was preparing for another opponent, he was busy preparing for me and less than a month to the fight, the sanctioning body reversed their decision, insisting I should face him. I went into that fight with a broken arm and that was why I lost. I would have loved to have a rematch with him but, unfortunately, he has been diagnosed with brain tumour and cannot fight again.

Who would you describe as your role model and what are your future plans?
My future plan is to step into the shoes of the late Hogan ‘ Kid’ Bassey and Dick Tiger Ihetu of blessed memories and become a world champion and I will not rest on my oars until I achieve it. In the case of my role model, Segun Ajose fits in very well because he encouraged me a lot and his advice helped me become the boxer I’m today.