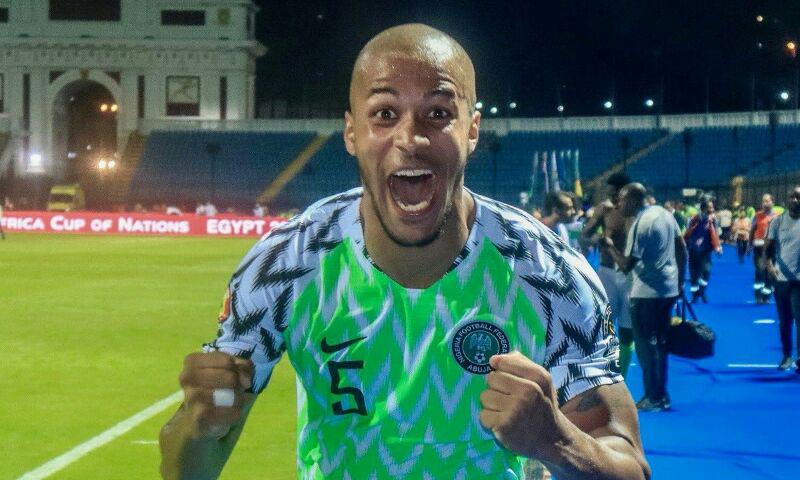 Troost Ekong’s 89th minute effort was all Nigeria needed to land in the semi finals of the on going AFCON 2019 in Egypt at the expense of South Africa who the Eagles beat 2-1 last Wednesday at the Cairo International Stadium.

That goal by Troost, apart from giving Eagles a semi final ticket, did the magic of saving the job of embattled manager, Gernot Rohr whose job was, no doubt, on the line had the Eagles not reached the AFCON last four.

The Nigerian Xpress Sports reliably gathered that Rohr’s employers, the NFF, after Super Eagles jerky start at the tournament resolved to show the Franco German tactician the exit door had the Eagles bowed out early.

The NFF in doing so, was only going to activate a clause in Rohr’s contract that stated clearly that the coach must take the Eagles to at least the semi final stage of AFCON or face sack.

Beyond the clause, the soccer federation would have equally been bowing to pressure from a section of the highly critical Nigerian soccer fans most of whom were already calling for Rohr’s sack since as they say in local parlance…”we no see wetin Rohr dey do.”

With the victory over South Africa and Eagles qualification for the Egypt 2019 semi final, Rohr succeeded in meeting the target of NFF and as such can be guaranteed of keeping his job.

Virtually all those who didn’t see what “he (Rohr) was doing”, equally started singing the coach’s praise and that of his boys, all courtesy of Troost Ekong’s 89th minute strike that shattered South Africa’s dream of recording the second super upset of the tournament after beating the hosts, Egypt in the round of 16.

According to our source, there is no way Rohr would not have gone the way of the likes of Emmanuel Amuneke and the Ugandan coach who have since been fired by their employers if the Eagles had not reached the AFCON 2019 semi.

“While we were celebrating the victory over South Africa, Rohr was also popping champagne because it was a victory that guaranteed him keeping his job. He (Rohr) knew that the only way he would be remaining as Eagles manager was to take us to the semi final and having done that his job is intact,” our source said before yesterday’s semi final game against the Desert Foxes of Algeria.

The NFF, it is recalled, decided after the Russia 2018 World Cup to keep the 66-year old manager in spite of the fact that he failed to meet the target of taking the Eagles beyond the group stage of the mundial.

The NFF had also felt then that sacking the coach after the mundial, would be counter productive given the fact that he was building a new team of young players that would go places if he is allowed to stay to continue the good work he had started.

Analysts also believe that for Rohr to become another Nigeria’s Clement Westerhof, the nation’s most successful foreign manager, he must also be given the Westerhof treatment who in spite of starting slowly with the Eagles was given time to build a solid team.

Westerhof in his first Nations Cup outing with the Eagles had lost in the finals to the host, Algeria by a lone goal. That was at Algiers 90.

Four years later, the Dutch coach returned to North Africa and won the cup for Nigeria at the Tunisia 94 tournament.

Rohr’s apostles believe he has what it takes to win titles for Nigeria if he is left alone to keep tinkering his young side. Rohr is in Egypt with a crop of players who are only making their Nations Cup debut.

Only the trio of Mikel Obi, Ahmed Musa and Kenneth Omeruo of the 23-man squad have played at the tournament.