How to resolve APC crisis, by Victor Giadom 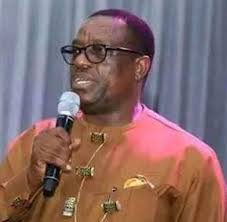 Self-acclaimed national chairman of the All Progressives Congress (APC), Victor Giadom, has said only the party’s National Executive Council (NEC) could resolve the current leadership crisis.

Recall that Giadom has been suspended National Deputy Secretary of the APC.

Giadom said APC should be handed over to a higher organ and not the party’s National Working Committee (NWC).

The suspended deputy National Secretary of APC stated this while addressing journalists, in Abuja.

According to him, “I have always insisted at the beginning of this crisis that the only way to resolve this issue is to surrender this party to a higher organ which is the best.

“And I am still insisting that the only way to get ourselves out of this mess is to convoke a NEC meeting.

“That is the only route out, I have the feeling that there is no other route to have peace and justice in this party except through a NEC meeting that has been my decision.

“There has to be an NEC meeting. NEC is the higher organ above the NWC, I do not see why they are afraid. You have to surrender this organ so that the right would be done and every other decision that has been taken by the leadership would be ratified by NEC. So if we do not have a NEC meeting, it would be difficult to resolve this crisis.”

The current leadership crisis in APC started with the suspension of its National Chairman, Adams Oshiomhole by an Appeal Court.

Against this backdrop, Giadom declared he was Oshiomhole’s replacement.

Giadom’s move to head the ruling party was, however, stopped by APC NWC.

Giadom was, however, restrained from parading himself as APC Deputy National Secretary by a Rivers State High Court, a few days ago.

The court had issued the ruling while granting an ex parte order.

36 govs to meet over deductions from Federation Account, states’ loans, others