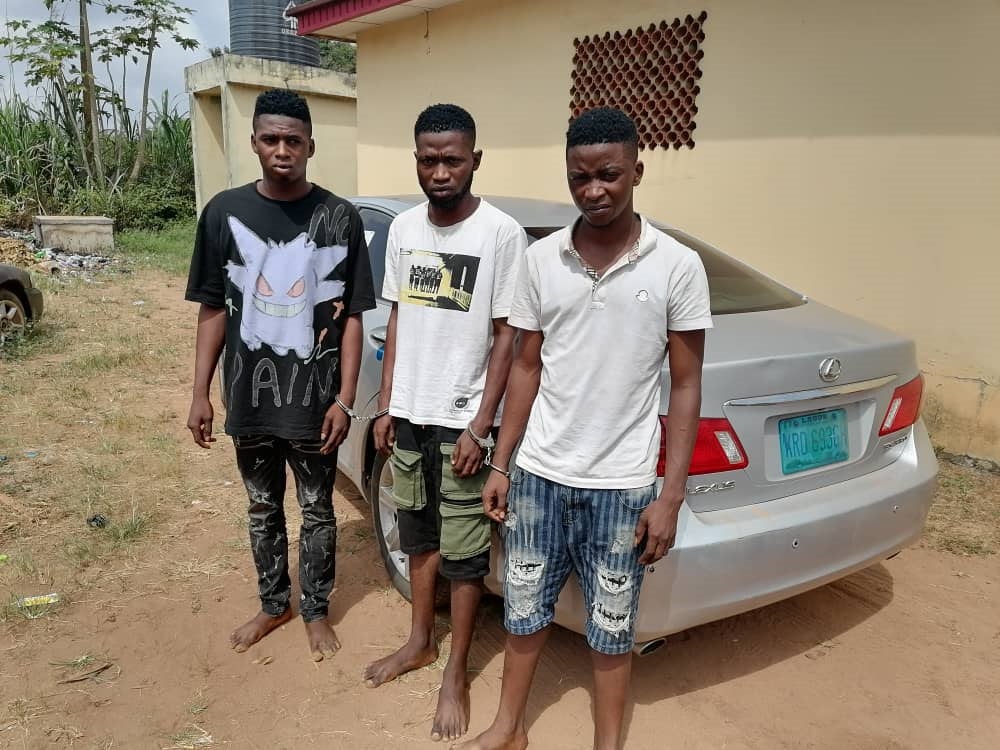 Three suspected internet fraudsters, who abducted an 18-year-old girl (name withheld) and took turns to have unlawful carnal knowledge of her have been arrested.

The suspects identified as Tunde Taiwo, 22, Damilola Adesina, 20 and Adegoke Amos, 21 were arrested recently by men of the Ogun State Police Command.

Preliminary investigation revealed that the trio driving in a Lexus ES 350, had been monitoring the victim for days, but got the opportunity to strike when she was running an errand for her mother around Ita-Ale area of Ilese Ijebu.

According to the Command’s spokesperson, Abimbola Oyeyemi, the suspects who whisked the girl to Rationwa area, was arrested after she reported the matter at Ilese Police Division.

Oyeyemi said: “A report by the victim, at Ilese Divisional Headquarters, Ijebu Ode revealed that while she was going somewhere around Ita-Ale area of Ilese Ijebu, she was accosted by three young men who rode in a Lexus ES 350 car and blocked her, forcefully dragged her into the car and drove her to Rationwa area where they took turns to rape her at gunpoint.

“On the strength of the report, the Divisional Police Officer (DPO), Yakubu Bala, a Superintendent of Police (SP), mobilised his detectives and stormed their hideout where one of the suspects was arrested.

“The one arrested led the police to the other two and they were subsequently arrested. On interrogation, they confessed to committing the crime. They claimed to have believed that the police are no longer working hence they could do anything they like but they were surprised when police came after them.”

The spokesperson said the Commissioner of Police (CP), Edward Ajogun, has ordered the immediate transfer of the suspects to the State Criminal Investigation Department (SCID) for further investigation and prosecution.