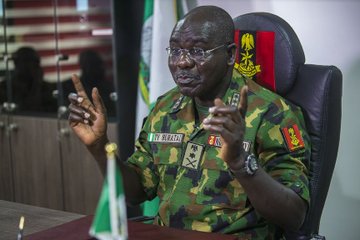 Chief of Army Staff (COAS), Lt.-Gen. Tukur Yusuf Buratai, on Monday, narrated how his deputy, Lt.-Gen. Lamidi Adeosun, Nigerian Army’s Chief of Training and Operations (CTOPS), saved his life the first time he was ambushed in the North East.

Gen. Buratai spoke, in Kuta, Osun state, during the commissioning of a bridge named after him constructed by the Nigeria Army Engineering Construct Regiment, at Ede.

The Army chief, while commenting on the military operations in the North-East, said when he was appointed Chief of Army Staff, he met with Gen. Adeosun, an indigene of Asamu, in Osun State, whom he said had commenced the process of rejigging the Army.

He said, “When I had the first ambush, he was with me in the vehicle, by my side. (It happened on) the 18th of September, 2015, and I can see the courage he exhibited.

“And he was able to mobilise the troop to counter the bandits, the criminals, the terrorists out of the way. So, his elevation is not new to me. He deserves it.

“When I was appointed as the Chief of Army Staff, I met Lamidi Adeosun at the North East. I met Adeosun as the Commander of Operations there and he started the rejigging processes of the Nigeria Army and we commenced our upward and progressive movement towards the technical defeat of Boko Haram.”

Speaking further, Gen. Buratai said Army Engineering Corps that constructed the bridge remained an institution that has played an important role in the infrastructural and economic development of the country. He recalled roles played by the Army engineers after the civil war, describing the officers and men of the corps as professionals that would deliver quality at a very cheap cost.

The COAS, who commended Olowu of Kuta, Oba Adekunle Oyelude, for supporting the Nigeria Army in the midst of bitter criticism, said the royal father had mobilised Civil Society Organisations and the media to support the Army.

Gen. Buratai continued,  “We have a new Army that is determined to be responsive and professional in the discharge of constitutional duties.

“The Nigeria Army Engineering Corps is one institutions that has played a very important role in infrastructural development. They are professionals, experts, and deliver quality at a very cheap cost.

“In his remarks, Governor Adegboyega Oyetola of Osun State pledged the continuous support of his government to the army, saying the bridge would foster cordial civil/military relationship in the state.

JUST IN: FG meets US officials over visa ban