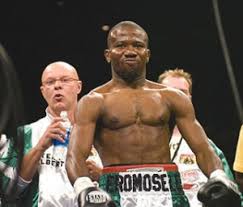 Albert ‘Bad Boy’ Eromosele is a two- time Olympian and a former IBA, IBO and IBF intercontinental junior middleweight champion. He was recently inducted into the Florida Boxing Hall of Fame. Presently, he is the President/ CEO of Elite Fitness Club in Miami, Florida, United States. He recently visited Nigeria and spoke with our correspondent, Ifeanyi Eduzor on his involvement in boxing, state of Nigerian boxing and the way forward.

Recently, you had the rare privilege of being inducted into the Florida Boxing Hall of Fame, what’s the significance of that induction?

My being inducted into the Florida Boxing Hall of Fame in June this year, was in recognition of what I ‘ve been doing on and off the ring.

The organisers after a careful study of my profile, discovered that I’ m one of the best boxers in my weight category. They also discovered that apart from being a former IBA, IBO and IBF champion, I fought 578 times as an amateur losing only 14 fights and as a professional, I had 31 fights, won 24, 12 by knockout, drew one and lost only six which is an incredible record by all standards.

They also found out  that I was at the 1996 and 2000 Olympics not to talk of the Commonwealth and the All Africa Games where I won medals and as such my contribution to the development of boxing is second to none. I’m happy that the induction was witnessed by no less a personality than the Nigerian Ambassador to the US who was there to rejoice with me and that alone gave me fulfillment and am now more challenged than ever before to contribute meaningfully to the development of the sports and that’s what I ‘m presently doing in Nigeria.

As a person who fought for many years for Nigeria before joining the paid ranks, are you satisfied with the present level of Nigerian boxing?

I must say that I m disappointed with what I saw when I came back. I was opportune to visit Brai Ayonote Boxing Gym, venue of the final trials for boxers going for the All Africa Games in Morocco later this month.

The entire officiating was nothing to write home about and it will be difficult for them to win medals because the best pugilists will not make the team. The officiating was so bad that I had to complain openly but was told that being a good boxer does not make me a good official.

I also discovered that most of the officials are from Lagos State which to me is an aberration because what we’re having is a national trials and not Lagos State trials. So, what I ‘ m saying is that for us to get it right, we must do the correct thing at all times.

Don’t you think that the referee and ring officials are in a better position to assess the performance of those boxers than those watching from the ring side?

I think the coaches should be left to do their job because they are the ones to take the blame when these boxers perform poorly at any international championship.

During our time, when we had great coaches like Isaac Ikhuoria and Joe Mensah, it was the duty of these great coaches to decide boxers who are to make the team and that accounted for the results we got. We have a national boxing coach who is an ex- Olympian and yet the NBF allowed referees to be dictating the pace and if this anomaly is not corrected, Nigeria might not win any medal in the North African country.

The answer to your question is yes I would like to help Nigerian boxers grow but a situation where I come to offer help and complain officially about anomalies I discovered  in the trials and somebody who have never thrown a punch before in his life will be disparaging me is quite discouraging.

I’m ready to help if they want me to do so. Presently, I’ve helped Ghanaian boxers and two of them are already World champions and they appreciate me a lot. I have been in boxing for 35 years and it’s high time Nigerians embrace honesty in everything they are doing. In Ghana, they’re honest and patriotic and that’s why they keep on producing World champions. And for  your information, I cannot throw my money at people who cannot appreciate my effort. Before I do that, the right people must be in charge of the helm of affairs. Our coaches should also realise that those of us abroad are not coming to take over their job but just to help them. I always tell them that Daniel Igali was at the Olympics with us and see the transformation he has brought to Nigerian wrestling.

Having said this, I want to assure you that I will do my best to help Nigerian boxers achieve their potentials because over there in the States, they keep on wondering why there are no longer good heavyweights from Nigeria and for your information, I was the person that invited former WBC heavyweight champion, Samuel Peter to the US and have helped some Nigerian boxers to travel to Australia to continue their boxing career and I will continue to do that.

But don’t you think that lack of modern facilities is retarding the progress of  Nigerian boxers?

I’m not going to put the blame on government alone. I am a product of Afuze Games Village. During my time, we did not have enough facilities to train with, the only advantage we had was that then NABA President, late Group Captain Brai Ayonote made sure we had competitions on regular basis and we go on training tours to Cuba before any major championship and that is what is lacking now. A situation where boxers are camped three weeks before a serious competition like the All Africa Games is not encouraging.

Another problem is that our boxers these days want to get everything on a platter of gold without working hard. When I was still fighting for Nigeria, every morning, I will run from Afuze to Auchi and on weekends, I run from Afuze to Sabongidaora and back, a distance of about 40 kilometers and I also train in my back yard which helped to keep me in top shape. So, any person who wants to make it in boxing must go the extra mile to be in top shape.

Can you tell us how you came about your ring name ‘Bad Boy’?

As an African boxer just coming from the Olympics to turn professional in the United States, nobody will take you serious to succeed. When I got to the States, they gave me a bad contract which states that if I lose any fight they will not pay me my sign- on fee of $100,000 .They did this in order  not only to cheat me but to frustrate me. To their surprise, the first fight they gave me was against Bulgarian Nikolai Ermenkov, a  Light heavyweight when they know I am a middleweight but I defeated the guy. In my second fight, they marched me up with another Light heavyweight, Micheal Schultz from the USA and I defeated him and not satisfied, they also gave me another light heavyweight in my third fight and to their surprise and astonishment, I defeated all of them and even knocked out the third boxer in the first round.

READ ALSO: There is infrastructural, human deficit in Benue –Olofu

After the fight, I now went to them to demand for my money. It was then, they nicknamed me ‘Bad Boy’ for beating bigger boxers. However, I later took them to Court for breach of contract and to be allowed to represent myself and I won the case. When this happened the managers conspired and stopped giving me fights. I want to say that I decided to take legal action because even when I was in Nigeria, I only respect people and don’t fear anybody. And when I’m going for a fight, I take it as it comes. If I win, I give God the glory and if for any reason I lose I give glory to God Almighty.

Your last fight was in 2011 against Sam Soliman. Why did you quit boxing after that fight when your fans were still expecting more fights from you?

I announced my retirement after that fight but officially retired from boxing in 2013. What happened was that I won the fight but because I had no manager, they gave the fight to my opponent who was running round the ring throughout the fight. I later discovered that because I was representing myself, the managers were not happy. I also discovered that after making $ 100,000 per fight, I would be left with only ,$ 20,000 after paying my sparring partner , medical expenses and others and  also pay tax on the money and at the end of the day I will be left with little or nothing. But in the other way round, my gym was giving me $50,000 every week and so, I decided to quit the game and concentrate on my gym.

Can you recall some of your most memorable moments at the Olympics?

It was awesome going to the 1996 and 2000 Olympics. Prior to the Olympics, I was ranked No 3 by AIBA and in my fight against the No 1 ranked boxer, I knocked him down twice but at the end it took them three hours to announce the winner because the referee was biased and when the winner was eventually announced, they gave the fight to my opponent but within me, I knew I won the fight because it was 11-11 on the score card. And apart from the fact that my opponent was not aggressive throughout the duration of the fight, how come he was declared winner even when it has been adjudged a draw.

Which moment in your career would you describe as most memorable and difficult to forget?

Going to two Olympics, Commonwealth and All Africa Games is amazing and I’m humbled about it and happy with my achievement. I am proud to say that I am successful and fulfilled as a boxer and right now, I am planning to build a first class hotel with a gym and arena where to promote fights at Lekki Beach which is very amazing.

Which of your fights will you describe as your toughest and your advice to upcoming pugilists?

The fight I can describe as my toughest was when I fought for the IBF title against Daniel Geale of Australia. Nobody gave me a chance in that fight. It was a very close fight but at the end of the day, they gave him the fight but I believe I defeated him. Another tough fight was against Derec Ennis of the United States for the vacant USBA Super welterweight title and my fight with Ossie Duran of Ghana for the vacant IBF Continental Africa Super Welterweight title which ended in a draw. All these fights were great fights and I will never forget them.

On my advice to upcoming boxers, I want them to be focused and dedicated as that is the only way they can be successful. There is also need for them to listen to their coaches’ instruction and take their training serious because there is no short cut to success.