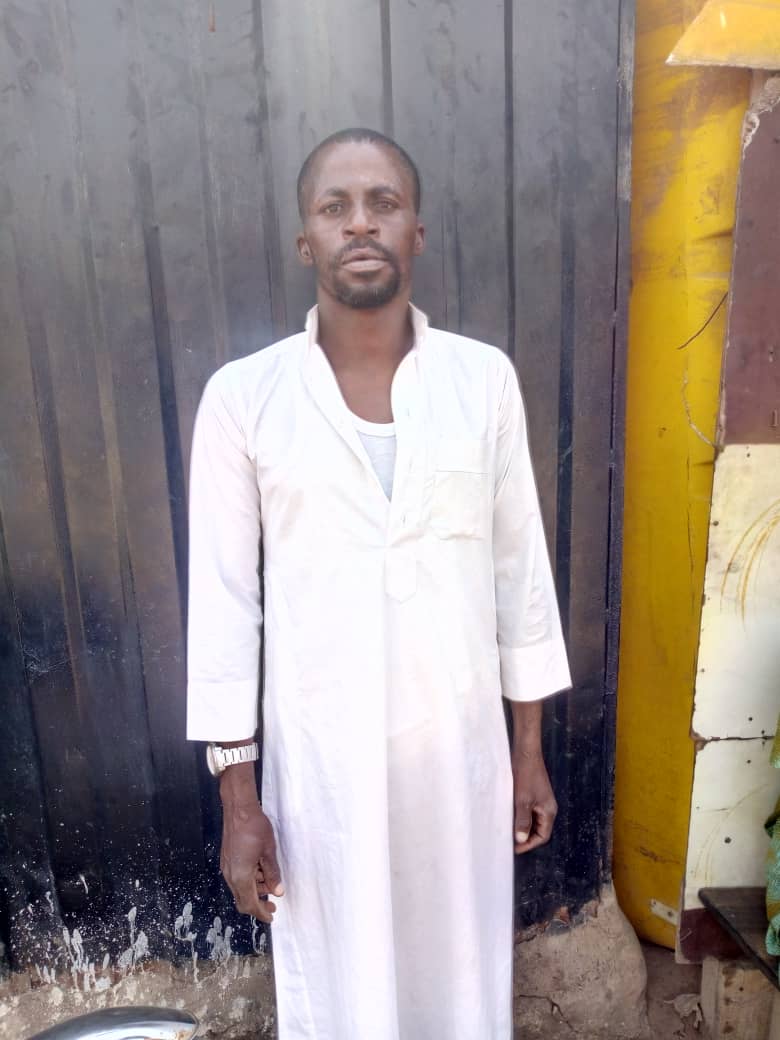 A love-struck man in Lagos whose love advances were spurned has allegedly killed four members of a family by setting them ablaze.

The suspect, a member of the Odua Peoples Congress, OPC, identified as Shola Adewunmi, could not come to terms that his love target, Esther, now late, could reject his overtures and so decided to teach her and her family a lesson, allegedly killing her, two siblings, Ayo and Nifemi, and their mother, Gbenke, by locking them up inside their shop and then setting it on fire.

Until their death, the family resided at No. 9, Oke-Abiye Street, Powerline, at Kola Bus Stop, Alagbado in Lagos, where their alleged killer was their neighbour.

However, life for the lone surviving child of the family, 22-year-old Oladosu Tobi, will definitely not remain the same.

Tobi, who is still in shock, as to how his mother and three siblings could have their lives terminated abruptly, said that he was only lucky to still be alive.

Agony for the youngster started seven months back when the alleged murderer had proposed to engage his 19-year-old sister, Esther, in a love relationship.

For reasons best known to the late Esther, she had refused the love proposal. That decision got Adewumi angry.

READ ALSO: AYANGBAJUMO: THRILLING THE WORLD WITH THE DRUM

“He said because my sister had refused his advances, he would make sure that my family did not celebrate the Christmas in peace,” Tobi alleged.

Making little of his threat, the family had continued with their normal life, not lodging a formal complaint with the police on the matter.

Unfortunately, Adewunmi, who was still bitter with the fact that Esther turned him down, reportedly found a reason to make good his threat on Sunday, December 16, 2018.

The Nigerian Xpress gathered that on that day, the suspected killer had an altercation with an aged woman, who sells shea butter. He was raining insults on the aged woman when Gbenke, who operated a canteen in the neighbourhood intervened.

Adewunmi saw the mother of four as an intruder and started insulting her as well. Esther, who was around warned him to desist from insulting her mother. He felt he had been disrespected and again threatened to deal with the woman and her children. As usual, the deceased woman pleaded with him, but he was bent on carrying out his threat.

The following day, the suspect, who knew the exact time Gbenke and her children got to their shop in the morning to resume for the day’s business, allegedly attacked them while they were relaxing in the shop.

He was said to have padlocked the shop from the outside and poured petrol on them through the window, set them ablaze and fled to a hideout in Ota, Ogun State.

Narrating how it all happened, Tobi said: “On the day my mother had the misunderstanding with Adewunmi, I had gone to my place of work at a bar in Ogun State. It was the next day that a neighbour called me to quickly rush home that my attention was needed over a crucial matter.

“I queried my neighbour to know what it was all about, but he insisted I must come home instantly. On getting home, I passed through my mother’s shop and discovered it had been razed down. I felt bad and walked straight home with the anticipation to meet my mother and console her over her loss.

“However, one thing was striking while I walked home; I discovered our neighbours were just giving me this sorry look. It was at this point I knew something was wrong. I entered our apartment where I found my uncles sitting alongside neighbours. I asked of my mother and sisters and one of my uncles told me they were fine. I requested to see them and then he told me there was something I needed to know but that first, I needed to be a man when he tells me.

“At this point, my heart skipped, the only thing that came to my mind was that maybe they had died from the fire incident. But my uncle told me they had sustained severe burns from the fire and were receiving treatment at a private hospital at Alagbado.

“I rushed down to the hospital where I saw my mother and sisters in a very terrible state. They were burnt beyond recognition. I managed to ask my mother how it happened and she said it was the handiwork of Adewunmi.

“She told me she and my sisters were relaxing in the shop at about 5am that day when the suspect rushed to the shop, shut the door against them and padlocked it. She said he poured fuel on them through the window and immediately lit a matchstick on them.

“She said they started shouting and calling for help, which eventually paid off, as neighbours rallied to break the lock and rescue them,” he paused, looking away in pain and tears rolling down his cheeks.

He continued, saying:  “I lost Nifemi less than 24 hours after the incident. My mother, Esther and Ayo, died three days after they were transferred from the private hospital to Gbagada General Hospital. They were buried on January 2, 2019.”

Earlier, the Alagbado Police Division, which had investigated the case before it was transferred to the State Criminal Investigations and Intelligence Department (SCIID), Panti, Yaba, had found a phone, belonging to Adewunmi on the scene of the crime, which further implicated him.

Although the suspect has been arrested at his hideout and will be charged to court soon, Tobi expressed fear over what he called a possible denial of justice.

Tobi disclosed that on one of his visits to the police formation, one of the investigating police officers had told him that the suspect’s phone that was found at the scene of the crime was not enough evidence to put the suspect behind bars.

“At this point, I have left everything in the hands of God, as much as I want justice for my mother and three siblings. I also fear that it may not be possible. If a suspect’s phone was found on a crime scene and some of our neighbours even attested to the fact that they saw him going to buy fuel that morning, what more evidence does the police need?” he asked.

“I am even lucky to be alive. What if it was one of those days I usually went to help her in the shop? What if I was there when the fire started?  We all would have been no more. Right now I cannot even quantify the pain I am feeling. I have even moved from that area because it holds bad memories for me and everyone is always giving me this sorry look.”

Husband of the deceased, Taiwo Omonitan, who is yet to recover from the loss, said there was more to the fire incident.

Omonitan took the correspondent round the crime scene. It was observed that the fire did not affect the shop. Omonitan said: “This area is full of wicked people and I had warned my wife to be very careful. The last time I saw her was when she came to visit me at Ajah, the Saturday before the incident. I told her to mind her business and avoid any misunderstanding with anyone.

“She left on Sunday morning, only to be called on Monday and informed of the fire incident. When I got to the scene, I noticed it was not an ordinary fire. Adewunmi must have used charm because the shop was not affected by the fire neither the items in shop. It was just their body. It even started smelling before they died.”

“I still find it difficult to eat. I cannot even go back to work, as I have had to stay at my sister’s house due to the shock. I am just trying to be a man because I cannot comprehend how one can just lose four members of his family just like that. This world is indeed wicked,” he said.

A caretaker in the area where the late Gbenke had her shop described the incident as a wicked act.

He spoke to The Nigerian Xpress correspondent: “Adewumi must not be released. He must be made to rot in jail. Those children were just too innocent to have been killed like that.”

The Nigerian Xpress gathered that the suspect was due to appear in court on February 7, 2019.

AYANGBAJUMO: THRILLING THE WORLD WITH THE DRUM