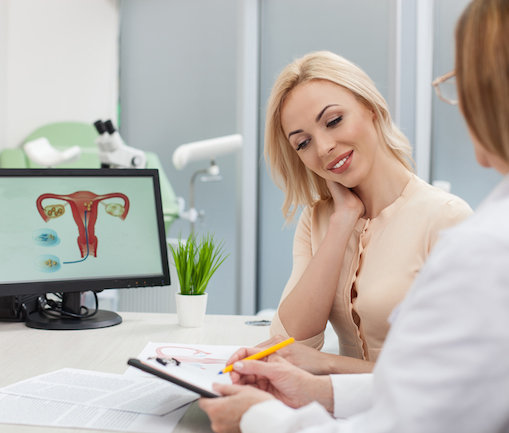 Dr. Isaac Shamaki, a Bauchi state based Gynaecologist, says ovarian torsion is a medical emergency for women diagnosed with the challenge.

Shamaki told the News Agency of Nigeria (NAN) on Monday in Abuja that if the problem was not treated quickly, it could result in loss of the ovary.

He said that a surgery would be done to untwist the ovary and if necessary, the Fallopian tube.

“Ovarian torsion is a condition that occurs when an ovary twists around the ligaments that holds it in place. This twisting can cut off blood flow to the ovary and the fallopian tube,’’ the expert explained.

Shamaki added that after the surgery, medication may be prescribed to reduce the risk of recurrence and that occasionally it may be necessary to remove the affected ovary.

The gynaecologist said that ovarian torsion could cause severe pain and other symptoms because the ovary was not receiving enough blood.

“If you’re experiencing symptoms of ovarian torsion, seek immediate medical attention. The longer the condition goes untreated, the more likely you are to experience complications.

“After assessing your symptoms and reviewing your medical history, your doctor will perform a pelvic exam to locate areas of pain and tenderness.

“They will also perform a trans-vaginal ultrasound to view your ovary, fallopian tube and blood flow,” he explained.

Shamaki said that torsion accounts for two or three per cent of all acute gynaecological emergencies, noting that torsion remains a clinically difficult diagnosis, as the symptoms are usually nonspecific.

According to him, the doctor will also use blood and urine tests to rule out other potential diagnoses, such as urinary tract infection, ovarian abscess, ectopic pregnancy and appendicitis.

He noted that doctors could make a preliminary diagnosis of ovarian torsion based on their findings; a definitive diagnosis would be typically made during corrective surgery.

“You may be more likely to experience ovarian torsion if you have ovarian cysts, which can cause the ovary to swell.

You may be able to reduce your risk by using hormonal birth control or other medications to help reduce the size of the cysts,” he said.

On the cause of ovarian torsion, he said it could occur if the ovary was unstable.

“For example, a cyst or ovarian mass can cause the ovary to become lopsided, making it unstable. You may also be more likely to develop ovarian torsion if you have polycystic ovarian syndrome, a long ovarian ligament, which is the fibrous stalk that connects the ovary to the uterus.

“You have a tubal ligation, pregnant trusted source and undergoing hormonal treatments, unusually for infertility which can stimulate the ovary. Although this can happen to women and girls at any age, it’s most likely to occur during the reproductive years,” he explained.

However, Shamaki said that ovarian torsion could sometimes resolve itself on its own.

“This is called intermittent torsion; meaning that the tossed ovary twists back into place and then ceases twisting.

However, experts say you shouldn’t wait to see if the ovary will twist back on its own,” he advised.

The gynaecologist, however, disclosed that torsion does not have an impact on a woman’s ability to conceive or carry a pregnancy to term.

“In cases of acute onset pelvic pain in patients with history of hysterectomy, the adnexal torsion must be kept in mind in the differential diagnosis, especially in those women who had undergone laparoscopic hysterectomy.

“It seems to be more frequent after laparoscopic hysterectomy. Therefore, despite it is a rare event, its prevalence could increase in the future with the widespread use of laparoscopic approach,” he said. (NAN)