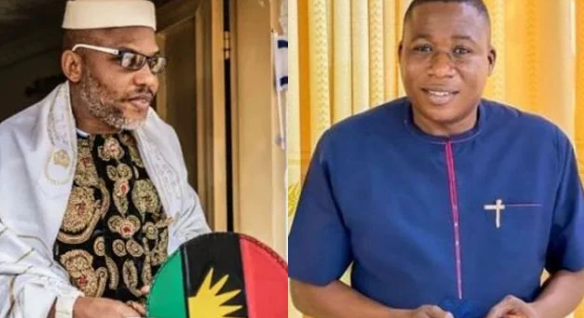 A group, Africa’s New Dawn (AND) has urged Yoruba Nation agitator, Chief Sunday Adeyemo otherwise called Sunday Igboho and leader of the proscribed Indigenous People of Biafra (IPOB), Mazi Nnamdi Kanu, to jettison their autonomy agitation and contest for the nation’s Presidency  in 2023.

AND’s National Coordinator, Iluckukwu Chima, while announcing the group’s plan to hold an awareness rally tagged ‘One Love, One Nation, One President’, on Thursday, in Abuja, said Nigerians would gain more when united.

While Mazi Kanu had been detained by the Federal Government, Sunday Igboho also is also being held by the government of Benin Republic after he was arrested at the Cardinal Bernardin International Airport, Cotonou, , with his wife on their way to Germany on Monday evening.

Chima argued that Nigeria is a platform in which Africa as a continent is identified and reckoned with on the global stage, adding that if the country is removed from Africa, the continent would have identity problems globally.

Said he, “Nigeria is the platform recognised all over the world. If we destroy Nigeria because of the challenges we are facing which platform would we have? Division is not the solution. The solution is one love.

“But then it is obvious that some people are trying to form a parallel government. Igboho and Kanu want to declare a country inside another country.

“That cannot happen because Nigeria is bigger than any single individual. Anyone who wants to form a government should patiently wait, build his political platform and contest in 2023.

“At that time, the electorate would decide on what they want. The constitution says election should be conducted every four years and that election should produced only one president.”

According to him, anyone who is aggrieved with the system should seek redress in the court, noting that “if the system is dysfunctional, taking laws into one’s hand doesn’t stop injustice”

He said the awareness rally would penetrate every section of Nigeria to wash off cynical messages conveyed by the fifth columnist who are bent on making Nigerians and the international community to lose faith in the country.