Share
Femi Peters, Abeokuta
A non-profit organization operating in Ogun State, under the auspices of Gbani Foundation over the weekend embarked on a free medical diagnosis and treatment for inhabitants of Egbeda community and its environs in Obafemi Owode local government area of the State.
The medical outreach which was held within Egbeda community saw beneficiaries mostly women, children, the aged as well as men being screened for Malaria, HIV Test, Typhoid, Sugar level, Blood Pressure, Eyes screening and other general health matters.
READ ALSO:Most churches lack financial management skills — Pastor Sam Adeyemi
The group also donated food items, clothing and other relief materials to residents of the community.
Gbani foundation, which was founded by Mrs. Oreoluwa Opatimehin organised the exercise in conjunction with a private medical group, His Glory Medical Group.
The group also donated food items, clothing and other relief materials to the residents of the community.
Medical Director of His Glory Medical group, Dr. Enock Idowu said the community members were tested for various diagnosis, while the medical team gave out medications and recommendations free of charge.
Related Posts

He told them to promote better personal and environmental hygienic practices by cleaning their surroundings, exercising regularly, eating fruits and vegetables and drinking plenty of water to ensure better health conditions among themselves.
His words “Many were found to be hypertensive, diabetic and few were Hepatitis B positive. These group of people were given necessary advise peculiar to the diagnosis and were given medications as well. Those with symptoms of malaria, typhoid fever, gastroenteritis were treated accordingly.
Cases that were beyond an outreach setting were referred to an appropriate medical facility for further management with willingness to shoulder the bill.”
While speaking with newsmen, Mrs. Opatimehin described the exercise as proof of the foundation’s strong commitment to reaching out to the less privileged and helping take care of some of the health needs they would ordinarily not afford or thought of.
READ ALSO: 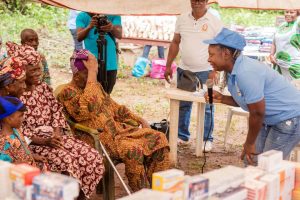 Female undergraduate, 18, bags scholarship for reciting Psalm 119 offhand
She said “This is one of those things we do at Gbani foundation. Ours is a noble cause as we we want to help humanity break free from poverty, diseases,  hopelessness and other varying life’s challenges. Today, we did not only test people for illnesses and other medical conditions, but we also gave out food items, clothes and shoes to members of this community. “
“We discovered exceptional medical cases which we are going to properly attend to and manage because health and wholeness is the essence of human existence. This is no doubt one of many people -oriented outreaches for us as a group. It would definitely not be our last. Our resolve to help people who genuinely need help remains as strong as ever.” she affirmed.
Some of the beneficiaries who spoke to our correspondent thanked the non-profit organisation for doing a wonderful job and said they were blessed to have benefited from the outreach.