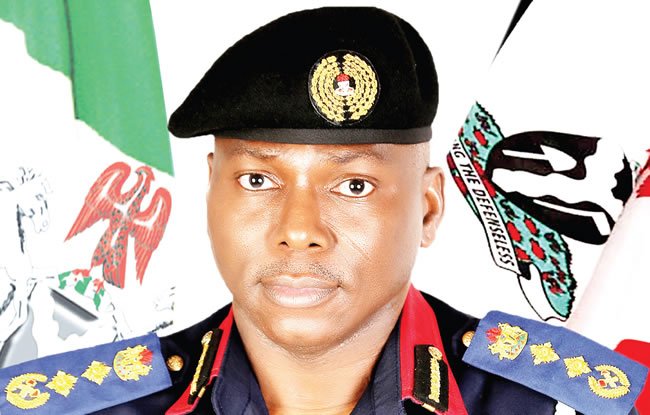 The group also demanded a thorough probe into the activities of the NCSDC which has allegedly been laden with corrupt practices recently.

The RNAC revealed that most of the projects started by the former CG of the Corps have been halted by Audi, adding that the NSCDC under his watch has assumed the role of a disgusting, corruption pit.

This was contained in a statement by RNAC spokesperson, Comrade Bello Usman, on Monday.

Usman said NSCDC has taken over the mantle of corruption from the Nigeria Police which before the protest were the symbol of corruption in the nation.

He said, “The NSCDC under the new Comptroller has continued to descend into more decays as it has assumed the role of a new corruption cesspit where lawlessness has taken base.”

Listing the alleged crimes of the Comptroller General, Bello said the NSCDC boss has on several occasions proven to live beyond his mandate by intimidating innocent Nigerians who have suffered several acts of brutality from his convoy and men on his personal security team.

He questioned the President Muhammadu Buhari regime, which has chanted the anti-corruption mantra several times, for allegedly turning a blind eye towards the numerous allegations levelled against the Comptroller General.

“You can recall that Dr. Ahmed Abubakar Audi has been the topic of grave allegations which have even been celebrated by the media including job racketeering where slots have been sold out to intending personnel at amounts ranging from N200,000 to N500,000. Nobody is saying a thing about this.

“We are aware that all contracts awarded by the previous Comptroller General have been stalled until kickback negotiations are done by him, not to forget that he has already awarded several contracts to companies belonging to cronies without due process and has in the same vein paid them upfront.

“These things are in the media, why is nobody saying something?” He queried.

Usman further decried the recent surge in the number of bribe-taking checkpoints on the highways by men of the NSCDC whom he said had taken over from the police whose reforms have already begun to produce fruits.

According to Usman, it will be better if the organisation is returned to its glory days where it had the confidence of the people and was living up to its mandate of protecting civilians.

It noted in its early days, the NSCDC was not a grooming place for corruption.

Meanwhile, the group also called on the Ministry of Interior, the Board of NSCDC and the Presidency to save the security outfit from going astray and also forestall the reoccurrence of another protest by well-meaning Nigerians who deserve protection and not terror from the security operatives whose salaries are paid by their taxes.

The group further maintained that it will not allow Audi to destroy the effort of the President Muhammadu Buhari-led administration’s successes in the security situation of the country.

It, therefore, gave the CG 7 days to honourably resign, saying he is not qualified for the job.

According to the group, the failure of the CG to resign will lead to mass protests in the country.

APC doesn’t have regard for security, welfare of Nigerians – Sen. Anyanwu alleges