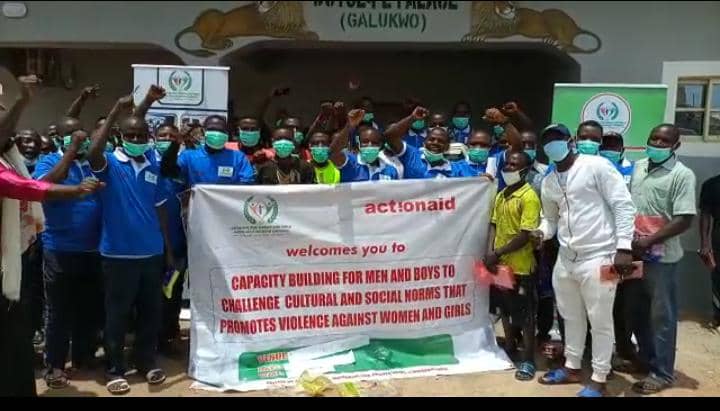 In a bid to combat and eradicate violence against women and girls (VAWG) at the grassroots level, Initiative for Women and Girls Right Advancement (IWOGRA) a non-governmental organization, held a one-day sensitization workshop for men and boys of Duste Alhaji Community, Abuja.

This mission is made possible and fully funded by ActionAid Nigeria implementing the ‘Strengthening the Capacities of Women’s Rights Organizations to Combat Violence Against Women and Girls’ (SLOC VAWG) project, and it is being implemented in three communities (Jikwoyi, Chika, and Duste Alhaji) in FCT by IWOGRA.

The Executive Director of IWOGRA, Nkechi Obiagbaoso-Udegbunam while addressing the participants urged them to take the training seriously and do a critical reflection on the cultural and social norms that have continuously hampered women and girls right and resulted in high incidences of VAWG.

The Program Officer of IWOGRA, Sa’adatu Adamu stated that the objective of the activity is aimed at building the capacity of the men and boys in the community, make conscious efforts at ensuring that they understand VAWG, how it manifest, how they can challenge cultural and social norms that promote VAWG and how they can take ownership of the campaign and become allies against VAWG. Further, she briefed the men and boys about some of the issues the women and girls identified when the organization engaged them and appealed with them to make efforts at ensuring that the identified issues are duly considered and addressed.

The Resource Person, Peter Obi, engaged the participants on VAWG. He sensitized them on what VAWG means, the role of men and boys in addressing VAWG, and why it is pertinent for them to become change agents. Using a participatory and interactive approach, he emphasized more on reasons why men and boys should see and take women and girls as an equal partner, stating that in this time and age women should not be living in fear of VAWG or restricted and deprived of their fundamental human rights.

To express their intent to end violence against women and girls, some of the men and boys volunteered to form and constitute the men and boys Community Response Team. The new volunteers were given messaging T-shirts for identification and messaging posters for pasting at strategic points in the community.

Obiagbaoso-Udegbunam commended participants for their eagerness to end VAWG. She urged them to be change agents and not see this engagement as a contest against them but rather as a breakthrough to end violence in their community so that their women and girls can live without fear of exploitation, oppression, abuse and violence.