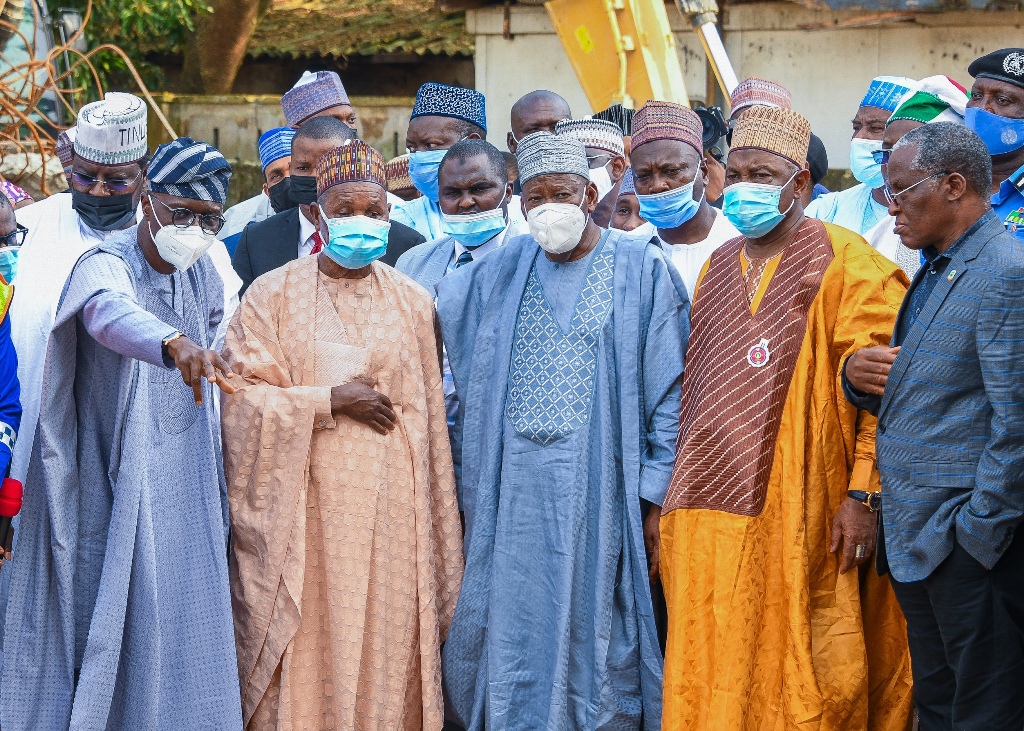 Governor Abdullahi Ganduje of Kano State and his Katsina State counterpart, Aminu Bello Masari, on Wednesday, visited the site of the 21-storey collapsed Ikoyi building in Lagos to commiserate with Governor Babajide Sanwo-Olu on the sad incident.

Governors Ganduje and Masari were accompanied by Governor Sanwo-Olu , members of the House of Representatives, as well as a Senator to the site of the collapsed building.

They came to represent the North-West Governors Forum.

Speaking on the reason for their visit, Governor Ganduje said they came to condole with the families of those who lost their lives in the incident.

According to Governor Ganduje, “We are here on the behalf of the North West Governors Forum to condole with the people and the government of Lagos State especially families of those that lost their lives in this unfortunate situation. Lagos is a megacity that can be compared with other megacities in the world.

“Lagos is a city with few land mass so the issue of building high rise buildings can not be avoided. It is unfortunate we have found ourselves in this situation.

“We are happy with the immediate action of the governor to set up panel that will find out what actually happened, said Governor Ganduje.

In his comment, Governor Masari of Katsina State said while constructing high rise buildings in Lagos cannot be avoided, it should not be at the detriment of lives and property of the people. He lamented several lives lost in the Ikoyi collapsed building.

In the words of Governor Masari, “We can not escape high rise buildings in Lagos but we should do it in a way that it will.not cost lives and property of the people. We are happy the governor has set up panel.to unravel. We pray to God this kind of incident will.bot happen again,” he said.

Governor Babajide Sanwo-Olu thanked the visiting governors for their visits and expressed confidence in the panel to do thorough job.