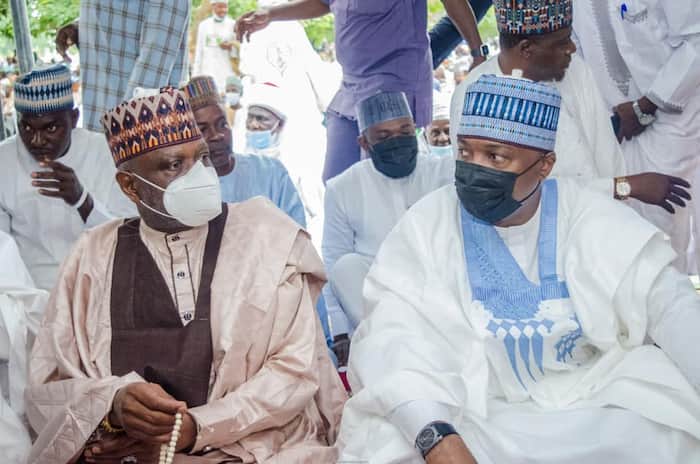 Wole Adedeji, Ilorin
Governor AbdulRahman AbdulRazaq of Kwara State and his strongest political opponent, Dr. Bukola Saraki, greeted and exchanged pleasantries, on Saturday, at the Ilorin Eid Praying Ground where worshippers observed their 2-rakat Eid-el Kabir prayers.
It was an uncommon development signifying a season of political peace unlike in the past years when supporters of the Sarakis and their opponents often used each Sallah celebrations at the city Eid praying ground to fight dirty.

READ ALSO: http://How ex-Boko Haram fighter became Nigerian prison official
Sen. Saraki had to stay away on few Sallah occassions shortly after he lost elections because of the palpable political tensions of the time and possible bloody fisticuffs between his followers and opponents.
Before then, there had been occasions when dignitaries were pestered with missiles at Eid prayers forcing worshippers to scamper for safety.
But on Saturday, however, Governor AbdulRazaq clearly sett the ground for a peaceful atmosphere when he engaged open exchange of pleasantries with leading opposition figures.
His disposition openly underscored a political maturity, statesmanship and love for peace and hubdreds of Muslim worshippers applaussed and commended him at the praying ground.
Dignitaries at the praying ground included the governor accompanied by Dr. Alimi AbdulRazaq, his elder brother who is the Mutawalli of Ilorin.

READ ALSO: http://Tinubu returns from France
The governor rose from where they sat together to meet Bukola Saraki and greeted him. He also came in company of Mallam Saliu Mustapha, a National Chairmanship aspirant of the All Progressives Party (APC).
Emir of Ilorin, Alhaji Ibrahim Sulu Gambari, who led his High Chiefs and turbanned Ilorin dignitaries for the rakat prayers.
Others were former Chief Justice of Migeria, Justice Alfa Belgore, former National Chairman of the People’s Democratic Party ((PDP), Alhaji Abubakar Kawu Baraje, Mallam Bolaji Abdullahi who is contesting Kwara Central Senatorial election in the PDP against Saliu Mustspha of the APC.In a brief interview with journalists shortly after the Eid prayers the governor expressed joy that the Sallah ceremony was peaceful saying; “we thank God that we had a peaceful Eid. My message to Nigeria is about peace. As long as we have peace, our country will prosper and progress. We should all work for peace always. That is my Eid message” .

The Eid prayer was led by the Chief Imam of Ilorin Sheikh Muhammad Bashir Soliu.