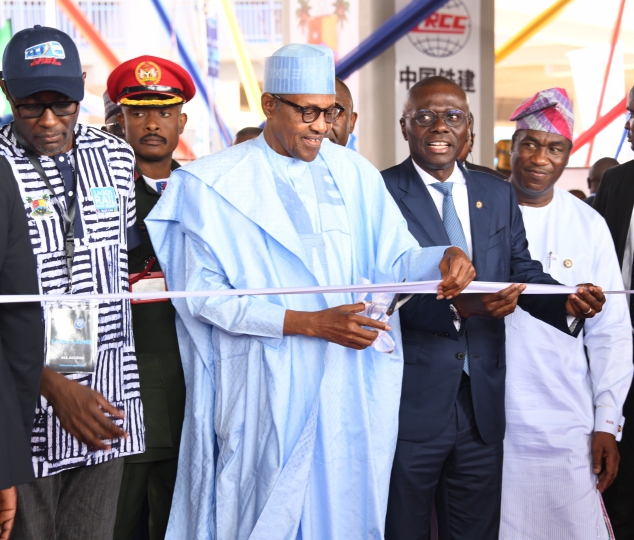 President Muhammadu Buhari’s refusal to speak at the commissioning of projects in Lagos during his two-day working visit to the state has generated concerns, anxiety among party faithful, other stakeholders who attended the events and Lagosians in general.

The President was in Lagos on Monday, January 23 and Tuesday 24th, 2023 to commission some landmark projects.

When he arrived Lagos, on Monday, at the Murtala Muhammed Airport, he proceeded to Lekki to open the Lekki Deep Sea Port, one of the landmark projects of Governor Babajide Sanwo-Olu.

Waiting to receive him were hundreds of party faithfuls, media practitioners, traditional rulers, cultural dance troupe, members of the state executive council, who had arrived the venue as early as 7am waiting for the president to arrive to welcome him.

After waiting for over right hours in what seems to be an endless wait, the President finally arrived at the venue in a chopper some minutes before 5pm.

His arrival was met with anticipation among those present as they had hope to hear from the president.

Their hope was however dashed as the President headed straight to the cutting of the ribbon for the inauguration and after going round the facility for a few minutes headed back to the chopper and left bthr vehue. He only waived to those in attendance, and did not speak.

The usual singing of the national anthem before the commencement of the event was also not observed.

His next point of call was the Lekki Rice Mill in Imota, Ikorodu,. five minute air journey from Lekki.

At Imota, hundreds of party faithful were also waiting for Mr President. Among them were also traditional rulers, journalists and several stakeholders who had also waited for 9 hrs for the President’s arrival.

President Buhari arrived at Imota 5:45pm and, as he did at Lekki, headed straight for the cutting of the ribbon to open the Mill after which he walked into the venue where guests were seated.

However, rather than speak to those in attendance, he merely waved to them. It took the intervention of Governor Babajide Sanwo-Ou, who addressed the guests for five minutes on his feet,  after which he immediately left the venue with the President.

On the second day of the visit, the President arrived at the John Randle Centre for Yoruba Arts and Culture at 10:34am.

Among those waiting for him was the Ooni of Ife, Oba Adeyeye Ogunwusi Ojaja 11, Minister of Youth and Sport, Sunday Dare, Minister of Information and Culture, Lai Mohammed, party faithfuls, state executive members, among others.

On his arrival, the President went straight to cutting the ribbon for the commissioning, went round to inspect the facility for 10 min and left the venue immediately with his security details, without addressing those in attendance, for the inauguration of the Lagos Blue Rail Line, the last of the projects.

At Marina, venue of the inauguration, the President also refused to speak before and after commissioning the project.

Governor Babajide Sanwo-Ou and his deputy, Obafemi Hamzat, however spoke on what the administration had achieved in the last four years and benefits Lagosians will enjoy using the rail.

The President’s refusal to speak at all the projects elicited reaction from journalists and some of the organisers.

One of the organisers, who craves anonymity, at the J. Randle park said a lot of money was spent to ensure the President was given a befitting welcome but lamented the refusal of the President to sit or address the audience.

“We spent a lot of money to put this event together so we could give the President a good welcome. The decorations and everything else cost a lot but I am surprised the president just came, cut the ribbon and just went back without sitting down or addressing the people, ” she lamented.

Many of the media practitioners who attended the project’s commissioning were also disappointed the President kept mute throughout the two-day visit.

Another party supporter who was at the Imota Rice Mill commissioning lamented that having waited for several hours to hear from the president, he was disappointed the President did not speak to them.

Some stakeholders and party faithfuls who spoke with The Nigerian Xpress Newspaper were of the opinion that the President missed the chance to use the project commissioning  to campaign for the re-election of Governor Babajide Sanwo-Ou and the Presidential ambition of the candidate of All Progressives Congress, APC, Bola Ahmed Tinubu.

“He could have used the commissioning of the projects to campaign for Governor Sanwo-Olu and Bola Ahmed Tinubu in the presence of party supporters.  We were all surprised he didn’t talk while commissioning the projects,” a party faithful said.

It, however, remains to be seen if the silence of the President was strategic as the February 25 general election draws closer.