FUOYE: Soremekun ‘bequeaths’ 74 infrastructural projects as he exits in fanfare 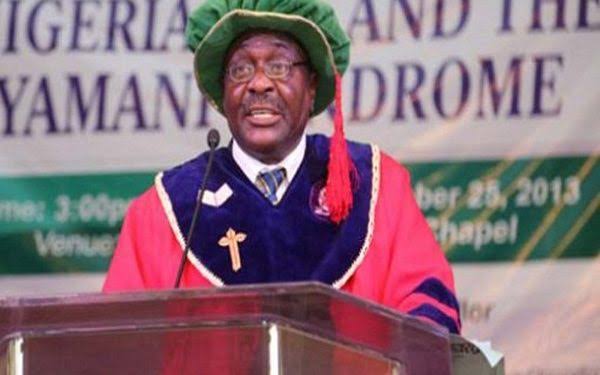 Out-going Vice-Chancellor of the Federal University Oye-Ekiti (FUOYE), is leaving behind as his administration’s enduring legacy, not less than 74 infrastructural projects for conducive learning and teaching environment, as he would be ending his five year tenure amidst pomp and pegeantry on February 11.
The Management of the institution disclosed this to newsmen at the weekend, adding that a historic launching of the projects will be carried out by dignateries from virtually all walks of life come Wednesday, February 10 at the premises of the University’s central administration building in Oye-Ekiti, Our Local Government area of Ekiti State.
The Management also declared that there will be a befitting send off party, hand over ceremony as well as inuaguaration of the VC designate , Prof. Sunday Abayomi Fasina on February 11 , 2021 to usher in the new tenure of Prof. Fasina and mark the beginning of another promising administration for the institution.
Among the dignateteris expected to grace the August occasion are Governor of Ekiti State and Chairman, Nigeria’s Governors’ Forum, Dr. John Kayode Fayemi, Governor of Ogun State,
Minister of Education, Malam Adamu Adamu,  Minister of Finance, Ex Secretary , National Universities Commission (NUC) and the Chairman, tetfund.
Dstinguished guests from the Federal Ministeries are  Director General, (DG), Federal Ministry of Budget and National Planning, Permanent Secretary, Ministry of Education, and the
Director, Tertiary Education.
Other distinguished guests in the category of royal fathers of the day are the Ewi of Ado, Oba Rufus Aladejiyigbe, Oloye, Oye Ekiti, Oba Adegolaju,
Elekole, Ikole Ekiti, Onisan, Isan Ekiti and Oba Tejuoso, Oke Ona, Egba.
Ekiti State Commissioner for  Arts and Culture, Prof Rasaki Ojo Bakare who is on leave of absence from FUOYE as former Dean, School of Post-Graduate Studies (SPGS) is also cordially invited to grace the occasion.
According to the Management, the historic commissioning of the 74 infrastructural projects is to celebrate the exemplary leadership offered the Prof Kayode Soremekun led administration which included other principal officers of the school who are the Registrar, Mr. Olatubosun Odunsanya who served with the administration of Prof. Soremekun as Director of Administration. (D.A),  Mrs. Bolatito Akande who is now the substantive Bursar of the institution after serving meritoriously as Acting Bursar for most part of Soremekun’s administration and the recently appointed Deputy VC Academics, Prof. Olusola Ojo as well as other distinguished principal officers of the institution including Director of Academic Planning, Prof. Cecilia Olufunke Akintayo, Dean of School of  Post Graduate Studies, Prof. Modupe Oyarekua,  Chairman , FUOYE Committee of Deans, Port. Olajide Oladele as well as deans of faculties, heads of departments among others.
Former Vice Chamcellors of the institution, Prof. Nebo and Prof. Azuzu have also been specially invited as guests of honour at the Commissioning/Inuaguaration ceremony.
Related Posts