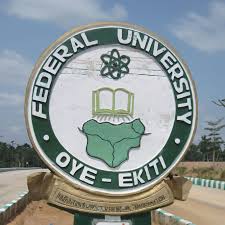 From Priscilla Ofunre, Ado-Ekiti
The Vice Chancellor, Federal University Oye-Ekiti, FUOYE, Professor Kayode Shoremekun says unwholesome system of education is one of the factors responsible for some of the challenges in tertiary institutions.
To this end, FUOYE is taking steps to address some of these challenges through partnership and affiliate programmes in order to bring about meaningful change in the sector as the university signed a Memorandum of Understanding with the Federal Polytechnic, Ilaro, Ogun state.
At the Signing of the MoU in Oye-Ekiti with a delegation from the Ilaro Polytechnic led by the Rector, Dr Olusegun Aluko. Professor Shoremekun explained that the  agreement between the two institutions was established to offer liberal education to FUOYE students and Ilaro to augment their areas of deficiencies.

READ ALSO:http://APC govs. forum urges Nigerians to defend judiciary
He noted that the development would offer Polytechnic students who were willing to upgrade themselves to acquire further knowledge in different fields of study as well as status from Higher National Diploma (HND) to Bachelor’s Degrees.
The Vice Chancellor who said that  FUOYE was poised to be Agent of positive change in Education sector, maintained that Management of the University would not fail in terms and conditions of the MoU. He said FUOYE would not tolerate any act that could jeopardize the aims and objectives of the Programme which was primarily targeted to promote academic excellence and future leaders who would be able to address the current challenge and be a catalyst for meaningful growth both in the society as well as in education sector.
Professor Shoremekun observed that the Top-up and Conversion Programme was designed to facilitate exchange of knowledge, promote academic standards, improve training and education of the students in order to compete favourably with their counterparts in the world.
Some of the Faculties approved by FUOYE for affiliation and award of its Bachelor’s Degrees to students of Polytechnic include Engineering, Social Sciences, Science, Agriculture, while all the Programmes in each of these faculties would be available for interested students to update their knowledge.
In his acceptance speech, the Director, Conversion and Affiliation, Federal Polytechnic, Ilaro, Ogun State, Dr. Raheem Oloyo appreciated the FUOYE’s management for the privilege enjoyed to give a facelift to system of education in both institutions through partnership.

READ ALSO:http://How to prevent full-blown attack of migraine headache – Expert
Dr Oloyo expressed the need to embrace electronic methods of records keeping to ensure easy access to students’ results, transcripts and other academic achievements in both schools.
Some of the Federal Polytechnics running Affiliate Programmes with the Federal University Oye-Ekiti, FUOYE, include: The Polytechnic, Ibadan, Federal Polytechnic, Ado-Ekiti, Ilaro apart from online programme also designed by the institution management to meet the demands in Education sector.