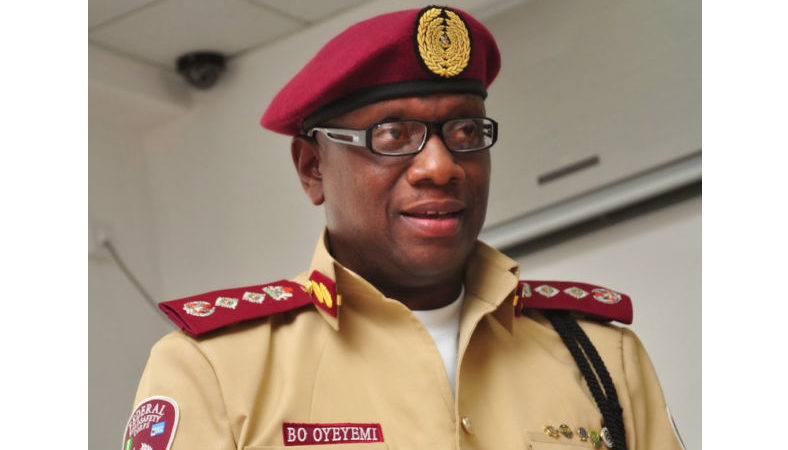 As the Eid-el-Fitr holiday-makers begin to travel back after the celebration, the Corps Marshal, Federal Road Safety Corps (FRSC), Dr. Boboye Oyeyemi, has ordered Commanding Officers to ensure effective deployment of personnel and other logistics to critical locations across the country for enhanced visibility and to combat gridlock that might hinder the  smooth flow of traffic.

According to statement, on Tuesday, by the Corps Public Education Officer, Bisi Kazeem, the Corps Marshal handed out  the directive to Zonal Commanding Officers, Sector Commanders, Corridor Commanders and Unit Commanders all over the country.

According to the order, patrol teams must remain on their routes till 1900HRS when traffic volume is expected to have reduced drastically, while rescue teams are to be on standby in all commands to take care of emergencies.

Buttressing this further, the spokesperson quoted the Corps Marshal as saying; “In order to ensure good visibility of the Corps and proactiveness towards preventing traffic jams, Commanding Officers are to physically supervise the deployment of staff and other logistics to the identified critical locations”.

In addition, to guarantee efficient monitoring of the critical routes, the Corps Marshal also directed that pictures of traffic situations from  critical locations prone to traffic gridlock must be forwarded to the monitoring and control room at the headquarters to reassure management of the free movement of vehicles.

“Expectedly, the Sector Commanders are to consistently supervise the activities of the unit Commanders under them  to ensure adequate supervision of their routes,” he added.

Oyeyemi commended the motoring public for their cooperation so far and enjoined them to continue complying with road traffic rules and regulations to achieve the envisioned zero road traffic crashes during the period and beyond.

He therefore called on the public to utilize the FRSC toll-free number 122 to report emergencies and gridlocks as well as  tune to the National Traffic Radio 107.1FM for real- time traffic update.