FROM THE INSIDE: INSIDE PMB’s FIRST MEETING WITH NEW SERVICE CHIEFS 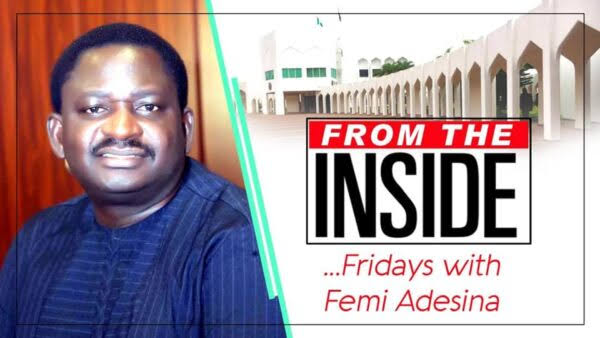 Whenever you see them file in, it is always in this order: Chief of Defence Staff first, followed by Chief of Army Staff, then Chief of Naval Staff, and finally, Chief of Air Staff. It is an institution that scrupulously respects hierarchy, and that is how the Service Chiefs turn out.

It was not different on Wednesday afternoon when the new leadership of the military visited the State House to have their first meeting with the President/ Commander-in-Chief of the Armed Forces, Muhammadu Buhari, himself a retired Major General of the Nigerian Army.

Another Comrade-at-Arms was there also. In fact, he led the Service Chiefs in. He is Major General Bashir Magashi (Retd ), Minister of Defence. Call it an all military affair, and you won’t be wrong.

Gen Magashi fired the first shot, addressing the President: “These are officers poised to serve in the overall interest of the country. They will put the security of the country in proper setting. They won’t disappoint you and the nation.”

The President welcomed them, saying the meeting was to congratulate them “for heading your arm of the Service.” He added that there was nothing he could tell them about the military, since they were in it, “and I was in it, too.”

President Buhari assured that whatever he could do as C-in-C would be done, “so that people will appreciate your efforts.”

“We promised to secure the country, revive the economy, and kill the culture of corruption. None has been easy, but we have certainly made progress. We have done well in the Northeast, and the people themselves can testify. We are working on Northwest, and other challenging parts of the country.

“We encouraged the people to go back to the land, they obeyed, and we have virtually attained food security. If that hadn’t happened, we would have been in great trouble, as there would have been no money to import food, with the crash in oil prices in the international market.”

As a retired, tested Army General, the President then gave the Service Chiefs the benefit of experience, asking them to look into the welfare of their officers and men.

“Ensure they feel professionally and physically secure. In terms of equipment and other logistics, we are doing our best, and will do more. Give officers you can trust command, and support them. Respect seniority and intellectualism, but also use people who can deliver, those who show courage and leadership qualities. I trained in the United Kingdom, India, and United States of America. It was not because my superiors liked my face. They know what they saw in me.

“During the 30 months of our Civil War, I was virtually sentenced to the frontlines. Thank God nothing happened to me, not even a scratch. Competence, loyalty, courage, leadership must be rewarded with promotions.”

President Buhari reminded the new Chiefs that the country was literally in a state of emergency, stressing: “This is the highest you can go in the Service. Be patriotic, serve the country well, because your loyalty is to the country.”

American Presidents would usually end their speeches with prayers for their country, and for the military. “God bless our troops, “ Joe Biden had declared during his inauguration last week. And President Buhari equality told the new Service Chiefs: “I will be praying for you. I assure you of that.”

Yes, the arm of flesh alone will not do it. It is through God that we do valiantly. Victory comes from the divine powers. May our military make conquests, till halcyon days return to every part of our country. And for we the citizens, may we remember to pray for them daily. And also make positive invocations: God bless our troops.

*Adesina is Special Adviser to President Buhari on Media and Publicity

FROM THE INSIDE: INSIDE PMB’s FIRST MEETING WITH NEW SERVICE CHIEFS