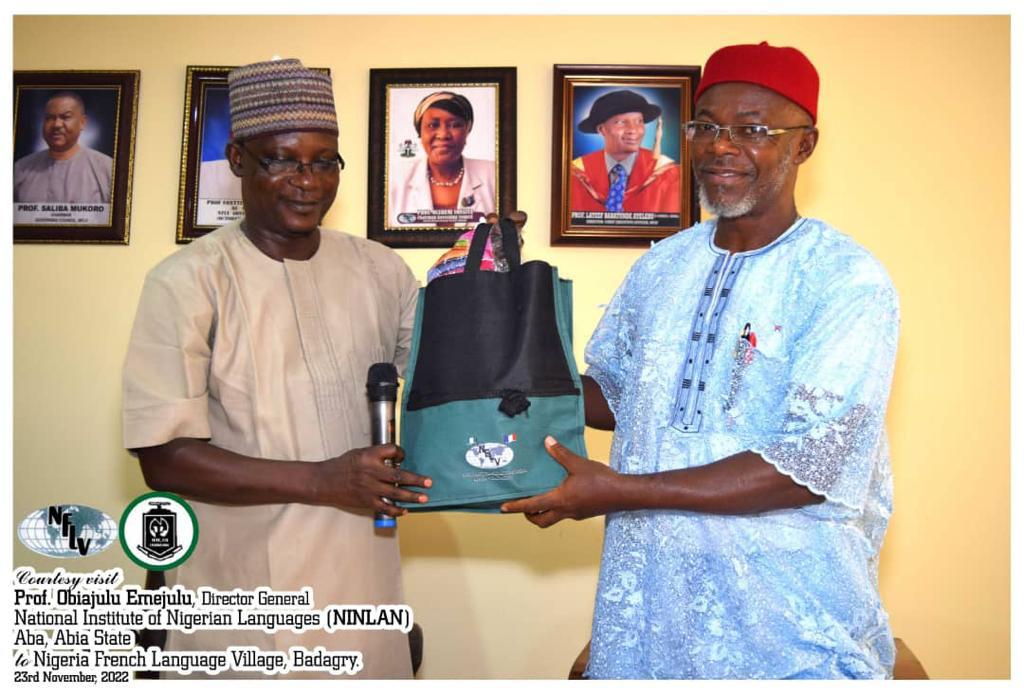 The Chief host, Prof. Lateef Babatunde Ayeleru, received the August visitor at the Council Chambers in company of Principal Officers and senior Management staff of the Village.

Prof. Ayeleru informed the sitting that his guest who arrived the Village the previous night for the courtesy visit would depart earlier than expected  owing to the change in his flight schedule for the day which was communicated to him late in the night.

For that reason, the guided tour which was scheduled to take place after the official reception was done earlier in order to save time.

According to the guest, the visit which  was his first in the Village is aimed at familiarizing himself with French Village community, an institution with which he has established a strong cordial relationship, first with its former Director, Prof. Rauf Adebisi and its Abuja Liaison Office, a facility from which he has benefited immensely.

The NINLAN boss admired the physical structures of the Village and commended the incubent Director/CEO, Prof. Ayeleru for the ongoing renovation works to make the environment more enticing and conducive for both staff and students.

He commended Professor Ayeleru for the zeal and youthful energy with which he was cooperating with fellow Chief Executives of Inter-University Centres in collectively resolving the challenges faced by the Centres.

He therefore urged all staff to continue to support Ayeleru with prayers and good will that he might record more success in piloting the affairs of the French Language Centre, to the advantage of all.

He informed  all in attendance that NINLAN would also host Prof. Ayeleru on its campus in Aba at its maiden Convocation ceremony for students of its Graduate Conversion Programme and first batch of the National Certificate in Education which is scheduled to hold on December 3, 2022.

The Registrar, Miss Ini Nwa appreciated the august guest for his visit, assured him of French Village continuous cooperation to move the Inter-University Centres forward and prayed for journey mercies on his return trip./

Prof. Obiajulu Emejulu after the mini reception was led to the auditorium where he addressed students.

He encouraged them to take the French studies seriously and use it to their advantage as Nigeria is surrounded by Francophone countries.

Prof. Emejulu who holds a Bachelor of Arts in English Language from University of Nigeria, Nsukka, and a Master and Doctorate Degrees in Communication and Language Arts from the University of Ibadan, was appointed Professor by Federal University of Technology, Owerri. He is  Fellow, Reading Association of Nigeria (FRAN), a journalist, commentator and a prolific writer. He is happily married to a professor, and blessed with children.