Of all the 13 persons who have picked up their notification of interest forms to contest for the presidential ticket of the Peoples Democratic Party (PDP), I can’t immediately remember anyone who bought his own form – even when we know all the aspirants are literally drowning in money of their own.

It has always been one youth group, one pressure group, some league of professionals, some amalgam of persons of different ethnic, religious and regional backgrounds, or simple town folks “taxing” themselves to purchase the forms for their preferred candidates. And, coincidentally, they all seem to prefer the candidates who are ordinarily awash with cash of their own. 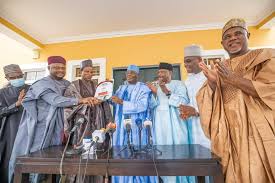 Even though we all know the truth: that nobody is buying any form for anybody, but the politicians are convinced that we’re all so foolish that we can’t see through the charade. That we are so undiscerning that we can’t tell that most of these nomination-form-buying do-gooders are actually not spending a dime of their own money.

READ ALSO: http://(FRANKTAL) Who will buy nomination form for me?

It is just the classic Yoruba saying about the proverbial “Abu’s money”. Owo Abu la n fi şe Abu l’alejo (It’s Abu’s money that we use in hosting Abu/giving Abu a treat).

In other words, one fact one can take to the bank about this proxy nomination-form-buying charade is that those who did not directly take the money from the aspirants to go buy them the forms are in the second category of do-gooders who are some of the basest mercantilists who are simply investing – and would be waiting for the return on their investments almost as soon as the real campaign funds begin to flow. Yes! These days the “investors” no longer wait for you to get into the office before they begin to draw down on their “investments”. They start the milking right from the funds raised for your campaign.

But then, that our politicians continue to go this same route of purchasing their nomination forms through proxies, and creating the false impression of their believed popularity, not only speaks volumes of a dire dearth of creativity, it is also indicative of what they think of us the electorate and our intelligence.

It does not matter that this is an already expired narrative. A drama that has been staged and re-staged so much that it has long lost its mojo.

Was it not only a few years ago that we were sold the lie that someone who was comfortably rollicking in the mouthwatering pension Nigeria pays its ex-presidents, as well as the near-criminal loot we shell out to our daily ballooning club of retired Generals as pension, and who had his kids in some of the best schools around the world, could not afford his party’s nomination forms?

READ ALSO: http://Buhari is shameless for not resigning as President after failing to fulfil promises to Nigerians – Fayose

(OPINION) Tariff hike: Senate’s pro-people efforts and the probe of…

Even as it was no longer a secret that a lot of moneybags had already bought into the then movement for his aspiration and that money was arriving in trailer loads, his handlers still insisted on selling us the image of a retired, poor, austere and cash-strapped candidate. We bought it. It was the same way we were successfully sold the narrative of a Goodluck Jonathan who had no shoes. We are a sucker for such romanticism.

So, today, even the oligarchs, the cowboys and all the blotted capitalists in the hunt for the ultimate ticket are lining up hirelings and fronts to go procure nomination forms for them.

It reminds me of a funny process I was privy to, in the early days of the current democratic dispensation. It was the case of a face-off between two very prominent politicians who were also public office holders at the time.

Having said uncomplimentary things about each other in the public space, inciting their respective naive supporters into baying for blood, and even dragging themselves to court over the matter, it suddenly dawned on both of them that a public rofo-rofo was not in the interest of any of them. They both dreaded the guaranteed public washing of dirty undergarments, which would come with confrontations in the open court, especially,  when a dramatic Gani Fawehinmi was already in the mix, willing to take the case free of charge.

The politicians quickly began to think of a way to quietly drop the matter, without losing face before the public, before whom they had puffed and threatened fire and brimstone. Of course, both men knew each of them had more than just skeletons in their cupboards. In fact, they had fresh corpses in those proverbial cupboards. So what to do? Both men secretly met by proxy and agreed to set up some sort of a small committee of peace lovers, comprising equally prominent Nigerians, to put up a public show of reconciling them. They even selected the members of the committee themselves. Mutually! Yet, they were supposed to be at war and not on speaking terms – before the public.

The job of the ‘committee’, simply put, was to go to the media, call for a truce and ‘appeal’ to the two ‘warring’ politicians to sheathe their swords and allow the peace-loving elders to intervene. In other words, the two politicians paid some other politicians to come and beg them to stop fighting.

The paid peacemakers soon went to work. They had separate photo-ops with each of the politicians and syndicated the photos to the media. A few days later, the committee announced it had reconciled the two men. The court case was subsequently withdrawn (or allowed to be thrown out for lack of diligent prosecution, or whatever). But most importantly, the public was fooled into believing that there not only was a big fight, but that some statesmen (whose only interest was to save Nigeria) intervened to restore peace and, above all, that the two politicians had listening ears and were very respectful of elders. But everything was actually for a fee.

So, today, when I see fellow hungry, and not-too-hungry, Nigerians falling over themselves to buy nomination forms for presidential aspirants, I simply follow the money.

I’m sure, by the time the All Progressives Congress (APC) finally opens shop for the sale of nomination forms, there would be a stampede over who would buy Asiwaju’s nomination forms.

For now, however, all the presidential possibles and ‘probables’ in the party are still trying to decode the legendary body language.

But one thing is certain, when the direction there becomes clearer, the same stale drama of proxy form buying would be re-enacted. And it would all be about money and fortune baiting. Nothing altruistic!

If it was not about the money, how come nobody is raising money to buy nomination forms for Oby Ezekwesili, Ngozi Okonjo-Iweala, Fela Durotoye, Omoyele Sowore, Col. Abubakar Umar, Kingsley Moghalu or even Pat Utomi? No one is even setting up pressure groups to go and beg them to run.

Even my humble self, who loves this country more than Buhari and Obasanjo put together, nobody has thought it wise to buy me any nomination forms, let alone come to beg me to run. Or do you people think I can’t do the job?

(OPINION) From N450m to N1.5bn monthly: The story of Nasarawa Revenue Board under…