I think Americans should come to Nigeria and learn how to conduct elections.

Can you imagine that, one whole week after voting was concluded, they are still counting votes! Some electoral official in Georgia (or was it Arizona?) even came on CNN the other day to ‘shamelessly’ tell us that the tallying might go on till next year before we can know which of the candidates took the state.

Now, that is preposterous! In Nigeria, we would have known the result before the first ballot was cast. In fact, while people are still on the queue to cast their vote, the FORM E8, showing how everyone voted (and signed by all the party agents), would have been forwarded to Abuja from the respective collation centres. These Americans are still learners!

At some point,  the Americans were so alarmed that they began to recall that classic Josef Stalin quote about how those who vote do not determine anything, and that it is those who count the votes that determine everything. But in Nigeria, even Stalin would be green with envy.

For here, neither those who vote nor those who count, determine anything. Here, it is those who are in government (who announce the results) that determine everything. They could choose  to ignore whatever the voters voted and whatever the collators collated, and just announce whatever suits them. In Nigeria, whether the voters vote or not does not affect ‘massive turnout’ or landslide victories. In fact, it is even when the voters stay away that we record our highest percentages of voter turnout.

The ‘winners’ would then ask whoever that is not satisfied with the results to go to court – the same court where the petitions would be handled by a bench of partisans fiercely loyay to the announcer’s party.

It appears it was only this aspect of filling the apex court with loyal judges, ahead of the polls, that Trump copied well from Nigeria. Unfortunately for him, he only copied well, he did not paste well. And the first rule of copying and pasting is: do not copy if you can’t paste.

How could Trump leave the states with so much power, if he wanted to run the show from the White House? Couldn’t he cook up some executive order to oust the constitution? Couldn’t he have a central INEC, that can declare any state inconclusive? Who approved this kind of federalism – or, is it restructuring? Why couldn’t White House deploy Navy Seals, CIA and FBI to Pennsylvania? This is electoral overindulgence! How can Trump give his order-from-above and one scamping rascal of a governor would overrule him? Insolence! Anti-party! In fact, treasonable felony! 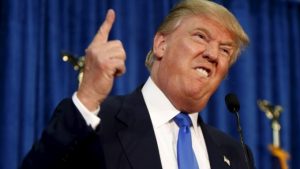 And to make matters worse, Trump and his Man Friday, Rudy Giuliani, would not let us drink water and drop the cup peacefully, simply because a few dead people voted in the election. Now, how can we honestly deny a dead person his inalienable right to vote in America, when their ilk regularly vote in Nigeria? In fact, in Nigeria, dead people don’t only vote, they get given political appointments.

Some of them head boards of government agencies, while others attend as board members, collecting sitting allowance and other benefits. Some even keep signing and collecting their salaries, leave bonuses and other entitlements long after they are dead. That is why the nominal roll in every government department is loaded with ghost wokers. Yes, we officially pay ghosts too.

In fact, I sometimes marvel at the backwardness of these supposedly civilised Americans! How can Republicans just be talking about dead people voting in 2020? In Nigeria, we reached that epoch as far back as 2003, when President Obasanjo was seeking re-election. His later-to-estranged friend, Peter Odili, who was the then governor of Rivers State, returned over two million votes for OBJ.

It was just about the exact number of registered voters in the state. It did not only mean that all the members of the opposition parties (including their candidates and their agents) voted for PDP’s Obasanjo, it also meant that no registered voter died in the months between registration and election day. Americans, please come down from your high horse and learn from us!

And, wait for this, I almost fell off my chair with laughter when Americans talked about voter intimidation and all that idle talk about using the constitution to bully off prospective voters. Haven’t they heard of ballot box snatching? How many shots, if I may ask, were fired at the polling boots? How many electoral commission offices were set ablaze? How many vounteers were abducted?

Did they ever get to read about Okota (Lagos) and the 2019 elections? Did they ever hear of some king promising to drown a particular ethnic group if they voted against his preferred candidate? Have they ever experienced people running back to their villages of origin, simply because they would be slaughtered suppers of whichever of their hosts that loses?

Simply put, in some parts of Northern Nigeria, when two natives slug it out in an election, whoever loses blames the Igbo residents for his loss, and makes them pay with their lives. Americans should come to Nigeria and take introductory classes in Voter Intimidation. Shioor!

In fact, I feel disappointed in Donald Trump, who happens to be the nearest to a Nigerian politician that we had in that US election. Yes, Trump should actually have been a Nigerian. I still don’t understand how he ended up in America. For eventhough he might not come from a shithole country, he sure has a shithole brain.

My only disappointment with him, however, is that he was doing things in half measures. If he knew that the ballots that come by mail would not favour him, what stopped him from asking his rednecks to set the post office warehouses ablaze? In fact, would it have been too much to burn down the entire US postal service?

Couldn’t the trucks ferrying the votes to collation centres have met with some accident on the way? Just anything to ensure that the votes did not make it to the centre – or if they ever arrived, they’d have arrived outside of the permissible time frame.

At least, he had started the ‘good work’ by frustrating every attempt to appropriate more money for the Postal Service ahead of the election, and getting Republican controlled state legislatures to block every bid to amend the electoral laws to accommodate the influx of mail ballots.

Now, because he did go the whole hog, his opponents now have the temerity to complain over such ‘little’ things as his supporters ‘toying’ with a Biden campaign truck at the edge of a cliff. If it were to be in Nigeria (and Africa), where Trump obviously lifted the template from, we’d have found that bus (I mean, its wreckage) at the bottom of that cliff. The story would then be that the driver and his passengers were so drunk that they lost control. By that time, all of them would too stone dead to counter the narrative. Of course,  there would be no CCTV or cameras anywhere.

But then, there  was one score on which Trump fully lived up his Nigerianness: announcing the results and declaring himself winner, even when the votes were still being tallied. And when it became clear that he was losing, he alleged rigging and other electoral frauds, tried to scupper the process by inciting his supporters to violence, and ultimately refusing to concede defeat.

He’s lawyers were already head for the court, even as the results weren’t announced yet. Then, he was breathing down the neck of his aides to go on air and condemn the election, accusing them of not doing enough to project his position. In summary,  he is refusing to handover after losing. Now, that is a typical third word President.

Now, I can understand why Trump always went out of his way to put down Nigeria and Nigerians. It’s sibling rivalry, because  deep inside him, he knows he honestly belongs with us.

FASHION: When last did you exfoliate?