FRANK TALK: The politics of insecurity

Since the last three days, I’ve refused to go to the office. And I won’t be going there any time soon. Reason? I have yet to obtain a clearance from the Army to proceed.

In fact, since I live in Lagos, I’m even at a loss as to whether it is to the Army,  the police, OPC, Amotekun, LASTMA, Omo onile, MC Oluomo, Tunde Poly, Sanwo-Olu, the Jagaban that I should be applying. Or is it to the mobile court of the environmental sanitation taskforce?

Yes, we now need army permit to step out of our houses these days – maybe, like the Le Pass in French colonies of old, or the ones Blacks were made to carry with them in Apartheid South Africa.

For neither the government nor its army can guarantee your security if you’re foolhardy enough to venture out without their clearance.

And if you think this is fake news, ask Malam Garba Shehu. The spokesman of President Muhammadu Buhari said the 43 farmers who had their throats slit by Boko Haram insurgents in Borno State last week, while working on their rice farms, did not obtain a clearance from the army before going out to work on farms. So, the questions to ask are: Is Zabarmari no longer on the books of the army as having been liberated from Boko Haram? What is the worth of such ‘liberation’ if residents still have to receive clearance from the army before they can go about whatever is left of their lives? Or is this what  ‘technical’ defeat of Boko Haram is really all about?

And, by the way, what would getting army clearance mean? Does it mean soldiers would then escort farmers to their farms? And watch over them while they work?

The funny thing about this development, however, is that it’s not really the Army that gives the clearance. It is actually the insurgents/bandits. They do it for a fee – ranging from as much as N50,000 to N300,000 or more – depending on whether you’re going to the farm to plant, weed or harvest. And on the size of your farm. This is said to be the new normal in many farming communities of the far North (from where the bulk of our food in this country actually comes).

A few weeks ago, when report of this latest normal became public, the authorities denied it, dismissing it as fake news being planted by enemies of the infallible Buhari government.

Well, now that the rice farmers of Borno refused to pay up, they have paid with their lives. And the authorities, who should hide their faces in shame for giving residents a false sense of security, are now the ones actually dancing on the graves of the dead, crying with one eye and reproaching them with the other. For not telling the military they were going to the farm. 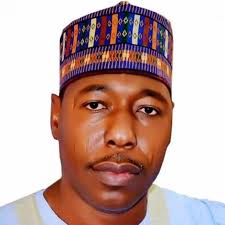 Yes, even in places we are told have been liberated from Boko Haram, the Army insists that the estwhile residents, presently scattered in far-flung IDP camps all over the country, cannot return to their homes, let alone go to the farms, from where they hitherto eked out a living.

Even when Gov Zulum stubbornly insisted on returning the people to their homes, a few weeks ago, the otherwise ‘technically’ liberated towns suddenly returned to their old ‘factory setting’ as theatres of war. Zulum barely made it out alive. It would seem that, for some reason, some people do not want a return to normalcy in those areas.

My malaria-infested brain keeps dancing around this idea that there is a gentleman agreement between Boko Haram on the one hand, and the army and government propaganda machine on the other.

Having long aggreed that the present government cannot, or does not want to, defeat Boko Haram, the parties seem to have agreed to mutually respect each other. Boko Haram has withdrawn from most of the councils it occupied during Jonathan’s administration, but with a caveat that the residents must not be allowed to return there. That way, while government can go on claiming before the rest of the world that it has liberated the areas, the insurgents would not lose face before the captive local civilian population who know they still can’t return to their homes.

While the army keeps up with symbolic attacks that hardly degrade the insurgents’ capacity (to justify the huge allocations coming to the war against insurgency), the insurgents restrict their own attacks to the outskirts – doing occasional show-of-force to remind doubting Thomases that they’re still a potent force.

Of course, the parties mutually infiltrate each other’s ranks and, I suspect, also share information, and exchange personnel. That is why some ex-Boko allegedly get absorbed in the army, while those who get tired of fighting (either temporarily or permanently) show up as ‘repentant’, and a treated as kings – with hansome benefits and resettlement packages. Sometimes, government scholarships are even thrown into the mix. And someone is somewhere deceiving himself that crime does not pay? Really?

Well, every now and then, the military, apparently to keep up the show, announces it has bombed the operational base of Boko Haram in the thick forests (of the Sahelian Northern Nigeria) from where the insurgents run their show, sacked the base and killed many commanders and footsoldiers. Of course, nobody asks whether this was not the same forest that had been severally sacked before now.

Curiously too, the defence videos backing up these claims invariably look so alike that each could pass for the other. I, for one, can no longer tell when new images are released. They all look alike, like some computer-generated films imposed on an infra-red camera technology.

To make matters worse, unlike the Islamists who regularly assault our sensibilities with gory videos and graphic photos of victims, either killed or being killed, our army is professional enough not to flaunt the corpses of eliminated insurgents. So, even when the army has ironically been asking #ENDSARS demonstrators to produce dead bodies of dead protesters, we the people are not asking the army to also show us the corpses of the Boko Haram fighters it regularly claims to have killed. Now, the absence of corpses clearly creates room for doubt. In fact, if truth must be told, the defence videos now border on the incredulous!

From time to time too, both sides (military and Boko Haram) sacrifice a few naive and disposable men, to sustain the narrative that the country is at war with insurgents. And everyone smiles to the bank. Both the CBN and AGF freeze no accounts and charge nobody to court. All the EFCCs and ICPCs and CCBs of this world refuse to see anything.

Now, if this curious war is not confounding enough, then the scenario at our borders might put the story more succinctly. What country, genuinely at war with imported insurgency and banditry, throws its borders open to unchecked migrations from the very neighbouring countries globally acknowledged as hotbeds of terrorism, religious extremism and violent radicalism? What country desirous of checking infiltration of bloodthirsty terrorists builds express roads and rail lines to link it to the enclaves of the same criminals? None! Not even in this new world of free trade.

Why are we so bent on giving our indigenous Fulani a bad name by recklessly enticing mercenary terrorists to come muddy the water from acrossthe border? And we don’t even stop at that: we actually roll out the red carpet for them to march into other hitherto insulated parts of the country.

Who, just who, bequeathed us this devious rulebook with which we are fighting insurgency? I just wonder.

Clearly, the long and short of our present war against terror is just the politics of who controls the defence/security budget. Everything else is just the pre-copulation dance. A foreplay!

Once the right persons are seen to be pocketing the money, then the powers that be can concoct whatever story they like, to justify the rest, including the failure to deliver on the job.

If need be, they could even create a diversion from the real issue, by throwing in ethnicity and religion to further muddy things up.

That is why certain key political and opinion leaders in a part of the country are more desperate to stymie the growth of social media and stifle information than address the bandistry and insecurity in the region.

So, while their counterparts elsewhere are setting up paramilitary agencies to confront insecurity, they are busy criminalising all manner of social engagements and exploiting loopholes in the constitution to heat up religion.

Rather than address hunger, insecurity and ignorance in their states, some of the governors are spending billions of Naira on a Sharia Police, Hisbah, that would rather go from beer palour to whore house looking for people drinking alcohol and having ‘illicit’ sex.

Hasn’t it occurredto them that all those fierce looking Hisbah operatives could be deployed to combating kidnappers, cattle rustlers and other criminal elements terrorising the states? Wouldn’t that be of better benefit than havingthem idle away in town looking for youngsters with dreadlocks and other funky hairstyles? Better than running after youngmen with sagging pants and tricycles ferrying unisex passengers. Talk about Nero fiddling away while Rome is on fire!