FRANK TALK: Neither Abba nor Abbas

A friend of mine, with a very criminal sense of humour, told me last week that it’s because embattled super cop Kyari has a very low criminal rating, that he was simply named “ABBA”. This contrast sharply with his ‘boy’, Hushpuppi, who clearly has a 5-star rating and is, appropriately, named in the plural: “ABBAS”.
The fake news bearer of a friend swore by the clay foot of Sigidi that Abbas is the plural of Abba.
It reminds me of Nigeria’s former international football maestro Jay Jay Okocha whom the British press insists, was “so good they named him twice”.
Yes! Hushpuppi was so bad they named him in the plural!
But I’m refraining from delving into the Abba Kyari dalliance this week, having made my position clear on the matter since last week.
Worse still, when the whole tragic comedy of cop and robber has since taken the now-too-familiar ethno-regional narrative we use to muddy up just about every issue in our country.
Yes, some people have since appropriated Kyari as their own ‘criminal’ who must be protected, and not be thrown to the blood baying hounds from the wrong side of the North-South divide.
Rather than Kyari, I’m more interested in what is playing out in Zamfara State,  Northwestern Nigeria.
And, don’t get me wrong, I’m not talking about the hundreds of school children abducted and still being held hostage by the terrorists we prefer to deodorize as ‘common bandits’ and ‘ordinary businessmen’. I’m also not interested in the why and how of the no-flight-zone regime in Zamfara, nor the illegal mining that has turned that once peaceful and innocent state into a gangster haven.

I’m not even interested in seeking out the gains of the political Sharia, which a certain Ahmed Yerima not only used to silence his political opponents but also to take a grip of the state in a near-criminal stranglehold, in the early years of the current democratic dispensation.
Of course, I’m not talking about the general insecurity, for which Zamfara has become more notorious than the entire North-East put together.
I’m also not talking about the fact that hapless citizens of Zamfara are harvested, by the dozens, from their homes and farms daily, by terrorists who use them as articles of trade to extract their seemingly mutually agreed financial allocations from a conniving government apparatus and politicians. It doesn’t matter that these agreed payouts are deliberately mispresented as ‘ransom’.
Why should I bother about those in the captivity of bandits when those in government there, who should ordinarily worry the most, are sleeping soundly and going about as though all is well?
To underscore this, one would observe that lately, apart from the daily news footnotes, no one seems to remember that hundreds of school children, including babies, and regular townsfolk are still languishing in the forests with bandits.
In their stead, the biggest news that comes out of Zamfara is decampment – how Governor Matawalle has dumped PDP for APC, how his deputy has refused to join in, how the governor has vowed to deal with the deputy, how the state assembly (most of which members joined the APC with the governor) has suddenly dug up impeachment charges against him, and how the embattled deputy governor and his even more embattled PDP are crisscrossing the landscape in search of courts that would save his job and retrieve their alleged mandate, which Matawalle has now gone and gifted to the APC.
And as if that is not enough, we hear of bickering over the dissolution of the state exco of the APC to accommodate the invaders from the PDP.
Then, the next big thing is about how the immediate past governor, Abdulaziz Yari, is kicking. Insisting that he remains the leader of the party in the state – a claim that no sitting governor in our warped party politics would accept from anybody.
And then, there is talk about the formula for sharing party offices and government appointments, with Yari boldly telling anyone who cares to listen, that the main reason Gov. Matawalle decamped to APC was that he is looking for re-election in 2023. 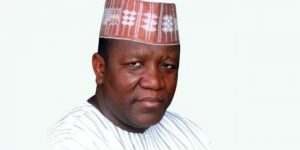 And for that, Yari and his gang would squeeze him until the pips squeak. Of course, that is a confirmation that Matawalle, a circumstantial governor, is actually a paperweight politician – who, even as a sitting governor, could not build himself a formidable structure that can win an election, and had to decamp to grovel to his erstwhile opponents.
Meanwhile, nobody seems to remember that many of those grandstanding over Zamfara’s political firmament should be in jail for rigging both their party primaries and compromising the last general election in the state. And those who do not fall into the above category of felons would definitely stand complicit in the banditry ‘business’.
They are the ones who regularly go to the bushes to chat and fraternise with bandits, capture it all on video, and come back to tell us they don’t know the criminals. And when we prod them, they begin to talk of amnesty and swear by the holy books.
Curiously as they run all over the place, like headless chickens, moving from rally to rally, the kidnappers have refused to see them and kidnap them. I guess it has to do with esprit de corp.
Clearly, the rest of us are just pawns in their kidnap game of chess. Which is why Nasir el-Rufai, in that trending blast-from-the-past video, clearly states that the politicians know how to reach the bandits whenever a family member of theirs is kidnapped.
Meanwhile, whenever they feel we’re making too much noise about any particular batch of hostages, the politicians place a few calls to their kindred spirits in the forest and, voila!, a few more hostages are released. And Nigeria continues to sink deeper and deeper.

FROM THE INSIDE: SEE HOW THEY’RE BEING SENT TO GOD TO ANSWER FOR THEIR CRIMES