By Steve Nwosu
I should probably begin this piece by coming clean on my extraneous interest in this matter: Chief James Onanefe Ibori is a man I have always admired  – first, from a distance,  and later, a little more closely.

As editor of a national daily, I also followed his trial in the United Kingdom, and had good reason to doubt some of the ‘findings’ and verdicts. But painfully, due to issues of ethics and professionalism, I could only report the news, without infusing my own biases.

At some point, my annual leave even coincided with a decisive phase of the trial and I obtained my employer’s permission to travel to London, with a view to, amongst other things, also squeeze out time to attend the sentencing.

Unfortunately, I was denied a visa, on the ground that what I intended to do in the UK amounted to ‘work’, and I would be needing a work permit, which I didn’t have.

Incidentally, since the former governor of Delta State completed his sentence and returned to the country, I have only met him once, at a wedding in Lagos.

But I still count him among my senior friends. And I have no apologies for that. Where is that governor, minister or public servant – serving or ex – who shouldn’t be in jail? But many of them still count among our friends. And we have not disowned them.

Even our President, Muhammadu Buhari, remains a friend of Abacha and the Abachas, to the extent of even deferring to them on his way to emerging president.

Coincidentally, the phenomenon known as James Ibori first came into my consciousness via the Abacha phenomenon. It was in those days of Gen. Sani Abacha’s phantom transition to democracy programme, and the five political parties the late Bola Ige described as five fingers of the same leprosed hand. 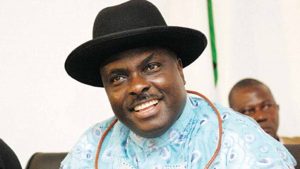 The name Ibori always popped up among us journalists any time the Grassroots Democratic Movement (GDM) was mentioned. And he was not particularly a poor man then. In fact, he was even discussed then with some dread too. It did not matter that much of it then bordered on the mythical. The same myth and dread that surrounded Abacha.
So, after so many years of being inundated with talk of Abacha loot, it seemed an almost logical and welcome break to introduce Ibori loot into the mix.

And that was what the British government provided last week, with its activation of the very commendable agreement President Buhari entered with London in 2016.

And suddenly, there is excitement in the land. The atmosphere is suddenly fouled up with views from the incredible to the incredulous. And the ridiculous. Then, there is the unmistakable body language of our thief versus their thief. An anti-corruption circus, and all that.
Unfortunately, many of those who are, today, unwilling to discuss the Ibori case, and are too eager to hush up every talk about it, are the same people who had been going on and on about Abacha loot all these past years.

Yes, as we the friends of Ibori now feel embarrassed and pained, and hurt, about this not-too-noble return of our beloved Ogidigbodigbo to the news headlines, so must be what the family and admirers of the late Sani Abacha felt all these past years. But we didn’t know it, because we couldn’t feel it. For, as Jimmy Cliff once sang, “Who Feels It Knows It”. Or as the Igbo proverb goes: a stranger’s coffin, on the pall bearers’ shoulders, always feels like just another palm tree trunk.

It almost never feels like a human remains unless it is the remains of our loved one.
Conversely too, many of those currently having an orgasm over this exposure of Ibori are the same people willing to swear by the holy books that Abacha did not steal.

For me, however, every time I read about the about-to-be-returned Ibori loot and what we plan to do with it, my mind goes back to some 13 or so years ago when Bishop Lawrence Osagie, made a monetary gift to my then-little daughter and her younger sister.

Yes, Bishop Osagie is one of the few Pentecostal clerics I know who actually give to people, rather than extort them in the name of God. Or hypnotize them to come and sow seed with stolen generators and ancestral homes. But that’s story for another day.

The bishop’s gift came few days after my little girl, who was barely four years old then, had, with every good intention, soaked my new N80,000 Samsung cellphone in the bathtub and given it a thorough scrub with sponge and liquid soap. Her reason for the wash? The phone was dirty because her baby sister had rubbed eba and soup on it. Of course, I didn’t want to burst her innocent bubble of excitement and accomplishment as she happily returned my phone, which was already dead as dodo. Needless to say, the phone never came back to life again.

I don’t know how my little girl got to know that her action actually killed the phone, until Bishop Osagie’s Pound Sterling gift, which converted to almost N50,000 at the time.

She took the crisp bank notes, looked them over and handed them back to me, excitedly reeling out a long list of what to buy with it.

I can’t remember all she reeled out, but the list included “a new phone for daddy, another phone for mummy, grandma, Uncle Chinedu (my younger brother)” and two pink phones for her and her sister.

She also wanted us to buy another car. And another phone for the girl that used to sit next to her in kindergarten classs. And another for her Auntie (the class teacher).

And the list went on and on. So long that I immediately began to feel sorry for the poor Pound Sterling notes in my hand.

It was this funny episode that came to my mind as I listened to both the British High Commissioner to Nigeria, Catriona Laing and our Attorney-General and Minister of Justice, Abubakar Malami, enumerate how the £4.2 million repatriated Ibori loot would be deployed.

We’re told it would be used for the completion of the Second Niger Bridge, the Lagos-Ibadan Expressway and the Abuja-Kano Road. Surprisingly, they did not also add the new Port Harcourt-Maiduguri rail line.

Now, £4.2 million is a lot of money in any currency on earth – and even in heaven. It converts to well over N3 billion.
Unfortunately, however, it is not nearly so massive placed side by side the N414 billion Second Niger Bridge  project.

And that is not saying anything about the Lagos-Ibadan Expressway, the cost of which keeps oscillating between N134 billion and N167 billion, with an expected variation of about N64 billion), and the Abuja-Kano Road. That road, which was initially billed for renovation with N155 billion, a cost some members of the House of Representatives said was overpriced, is now to be completely built afresh with over N809 billion.

It is these projects, we’re told, that would be completed with Ibori’s N3 billion.

Of course, I know some funds had earlier been released for each of these infrastructure projects, and that more would still be released after, but it is disingenuous to create the impression that a meagre N3 billion would be used to complete these projects.

For me, this proposal looks more like a believable lie told to the British government to convince it to release the money. I guess it’s when the money is in our pocket that we’d decide what to actually do with it.

I just pray it doesn’t get kidnapped on its way to the various project sites.

But, like I told a friend during the week, FG’s holding on to the money is like the police helping to recover someone’s stolen vehicle and then converting it to their own use, because the owner refused to follow them to the robbers’ hideout to retrieve the car.

It would have been better if the FG identified a symbolic project in Delta that could be completed with the recovered money and sink it there. Or better still, the money could even have been used to further upgrade the Asaba Airport or the Oghara Stadium.

That said, I still think it smacks of shamelessness for the Delta State Government, which vehemently denied that its money was missing, to begin to now lay claim to the recovered money.

Of course, we all understand why it had to maintain that position of having lost no money. Handing Ibori over to whatever law is hardly the payback to give a man who literally piggybacked you into power and prominence. Moreover, it would be suicidal (both politically and otherwise) for any Deltan, who is not a bastard, to join in the public ridicule of James Ibori, the undeniable political godfather of modern Delta. This is even more so when there was still a big question mark over the UK conviction of Ibori – given that some of his prosecutors and investigators were also indicted for all manner of foul play in the handling of the case.

Ibori is still enjoying rockstar popularity in Delta today (across party divides) because his people strongly believe that his travails had more to do with political persecution than financial malfeasance. Even when they have never ascribed sainthood to him.

On this score, therefore, it would probably have served the Ibori image better if the authorities in Asaba had simply kept quiet about the returned loot. That way, we would not have to remind them that they did not only say there was no money missing, but also went to court to stop the EFCC inquest.

Now, they have inadvertently brought more opprobrium to the same person they, justifiably, wanted to protect from further ridicule.