For some inexplicable reason, every time I hear the name Emefiele, my treacherous mind immediately begins to scroll back this photo (below). 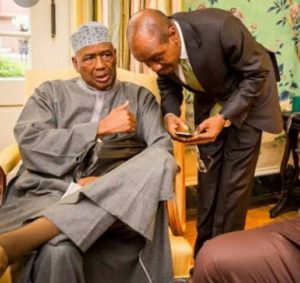 Somebody told me it was taken several moons ago, when Central Bank Governor Godwin Emefiele had not been confirmed for a second term in office.
Now, before mischievously fercund imaginations begin to run wild, let me make haste to add that this photograph has nothing to do with the sale or purchase of 9mobile. It is also not about any lobby for second term. And, even if the postures suggest otherwise, it also has nothing to do with a master giving instructions to his servant. And don’t even mention ‘cabal’!
This photo is not even about the allocation, and sale, of US Dollars, for which some no-good BDC operators wickedly gave the late Malam Ismaila Isa Funtua an alias.
Luckily for them, the nickname was only mentioned in whispers.
However, I can also swear by the poxes of Şopona that I do not also know what the two men were talking about. For if it was about Anchor borrowers, Gov. Bagudu Atiku of Kebbi State, not Gen. Dambazau, would be sitting close by.
READ ALSO: https://www.thexpressng.com/2021/09/25/abba-kyari-running-from-justice-fbi-tells-court/
The only link between photograph and anything else is that I recently learnt that in the Ika dialect of the CBN governor’s roots, the name EMEFIELE connotes an admonition against misbehaving, or ridiculing of oneself. Or better still, it is a vow not to engage in such malfeasance.
Now, I wouldn’t know if the CBN governor, either by this photo or by other deeds, has been living up to that name of his forebears on his job, especially with his recent outburst against abokifx.com, and his seeming ever willingness to do the bidding of a few men behind the mask. How could CBN gov be inadvertently admitting that Abokifx manages the forex market better than his CBN? For, threatening to deal with the brains behind Abokifx is like having a big head and yet threatening to deal with the your tailor for sewing you a big cap. Abokifx saw a need and moved in to provide solution, at a fee. But, I guess that is debatable.
However, I’ll not join those heaping all the blame for our battered Naira on poor Emefiele, and calling for his resignation.
I feel for a man who has gone beyond the call of duty of monetary policy and regulating of the financial sector, to engage in directly financing Agriculture, Education, Health, Research, physical infrastructure, fighting insurgency and just about anything. Emefiele’s CBN is now like that cure-all concoction the Yoruba call Gbogbo Nise.
At times, it had even ‘encroached’ on the brief of Hammed Ali’s Customs, by indirectly banning the the importation of certain goods, by denying them official forex allocation. His is not a normal central bank brief. But these are not normal times.
Related Posts

Of course, we can pick holes in the implementation of some of these forex restriction regimes. For the forex so mopped up, or restricted, still managed to find its way to the black market, through officials of government and friends of government – including believed benefactors of Emefiele.
So what we have is a case of a CBN that hunts with the hound and runs with the game.
So, we announce that all requests for forex must pass through the banks, yet when you approach the banks, they never have enough. The managers phone their own aboki to come sell you forex, at black market rate, right inside the banking hall.
If you insist on going by the CBN directive, the banks would not only deliberately waste your time, they would, as one particular advert jingle would say, ask you to bring the C of O of Atlantic Ocean as collateral.
As for the Agribusiness loans for small and medium scall businesses, they’d demand documentation that even Harvard business school graduates would struggle to fill. Even yours sincerely, who is not a total illiterate, spent almost a year and a half trying to answer all the technical questions involved, without success. I was at it until the initial investment, which I needed the NIRSAL loan to support, wasted away.

Yet, this is a loan that is supposed to be accessed by barely literate farmers. And I ask myself: Are these same requirements also demanded of the Kebbi rice farmers? I guess some animals are more equal.
And that does not mean that Nigeria is an animal farm, nor that I want to join Nnamdi Kanu to deride our dear country as a zoo.
So, after all said and down, Godwin Emefiele (CON) remains my aboki. My friend. Not abokifx.com. And,  definitely, not as in the uncomplimetary ‘aboki’ one picks up from some conversations on the east side of the Niger.
In fact, the CBN top man is so learned that if he were not to be Ika, he would have been revered as a ‘Malam’. Mind you, again, not the derogatorily corrupted version that sounds like ‘morla’, among the Yoruba.
That is why I’ll still not ask Emefiele to resign, especially when his only offence is failing to run his slave errands like a free born.

NYSC advisory: Reading between the lines
The outgone week was surely not the best for the National Youth Service Corps (NYSC).
First it was a travel advisory that was not only embarrassing, but naive and not well thought out.
In fact, if some foreign country had issued that advisory to its citizens travelling to Nigeria, we would not only have summoned (or expelled) their ambassadors by now, but minister of information Lai Mohammed and all the army of tongue-in-cheek patriots in government would since have tired out our ears with tales of how foreign elements, working with the opposition and other enemies of state, are desperately trying to bring down the Buhari government. 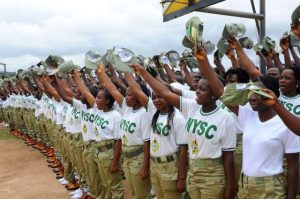 And just as the leadership of the NYSC was playing the compulsive lying game we come to accept as way of governance in Nigeria, denying authorship of an advisory contained in a booklet it has been handing out to corps members since last year, a seeming psychopathic female soldier upped the ante in Calabar.

YOU MAY ALSO LIKE: https://www.thexpressng.com/2021/09/24/icpc-arraigns-proda-dg-for-alleged-n23-5m-fraud/
She not only humiliated a fellow woman and corps member, but also desecrated her NYSC uniform, making her kneel in the open and pouring mud water on her right from the crown of her head. And intermittently slapping her as she did so before camera.
While we wait to see how the army handles this matter, knowing that its knee-jerk reaction would be to sweep the matter under the carpet, we can’t but return to the abominable NYSC advisory.
Reading between the lines, the advisory, contained the NYSC handbook, titled “Security Awareness and Education Handbook For Corps Members and Staff,” would read like this (The capital letters are mine):

“The kidnappers may ask for contact persons, do not mention your place of work, but your close friends and parents. They will reach them to negotiate for your release”.

MEANING: YOU’RE ON YOUR OWN WHEN YOU’RE KIDNAPPED. IT’S BETWEEN YOU AND YOUR FAMILY.  LEAVE THE NYSC OUT OF IT. WE WON’T NEGOTIATE,  WE WON’T PAY RANSOM, WE WON’T PLAY ANY PART TO RELEASE YOU. IT DOES NOT MATTER THAT WE’RE SUPPOSED TO BE RESPONSIBLE FOR YOU.

“Advise your friends involved in the negotiations, they should be friendly with the captors.

WE KNOW HOW TO NEGOTIATE WITH KIDNAPPERS, BUT WE WON’T RAISE A FINGER.

When travelling on “high-risk” roads, alert “family members, friends and colleagues to have someone on hand to pay off the ransom that could be demanded”
KIDNAPPING IS NOW A LEGIT BUSINESS RECOGNIZED BY GOVERNMENT AND THE LAW. SO,
YOU MAY WANT TO TAKE OUT AN INSURANCE POLICY AGAINST KIDNAPPING BEFORE GOING ON YOUTH SERVICE.

FORGET WHATEVER THE FEDERAL GOVERNMENT, STATE GOVERNMENTS AND THE SECURITY AGENCIES TELL YOU TO THE CONTRARY, NO NORMAL PERSON STILL TRAVELS ON THOSE ROADS, EVEN IF YOU HAVE AN ENTIRE ARMY GUARDING YOU.

“Do not antagonise your captors, be polite and operate with reasonable regards.”

THE KIDNAPPERS ARE RESPECTABLE BUSINESSMEN WHO SHOULD BE REGARDED WITH UTMOST COURTESY.  MOREOVER,  SOME OF THEM MIGHT EVEN BE NYSC STAFF.

“Establish personal relationship with your abductors as soon as possible”

DO SOME NETWORKING TOO. YOU NEVER KNOW WHO, IN HIGH PLACES, THE KIDNAPPERS MIGHT KNOW. THEY COULD HELP PUT IN WORD FOR YOU TO LAND THAT DREAM JOB OR CONTRACT.

“Advise your friends involved in the negotiations, they should be friendly with the captors.

IF THEY WANT TO RAPE YOU AND YOUR FRIENDS, PLEASE, FREELY OFFER THEM AND LET THEM HAVE THEIR WAY. IT IS PART OF THEIR BUSH ALLOWANCE.

ALL THE SELF-DEFENCE STUFF WE TEACH YOU IN CAMP IS JUST TO CREATE JOB AND RELEVANCE FOR THE TRAINERS. IT’S REALLY OF NO USE.

“Make no statement to the media after your release without official clearance but share your experience with close associates,”

SUFFER IN SILENCE. KEEP OUR SECRET SECRET. JEALOUSLY PROTECT OUR INCOMPETENCE. IF YOU DON’T,  WE WILL ADD TO WHATEVER TRAUMA YOU MAY HAVE SUFFERED, OR ARE STILL SUFFERING.