Even as we keep complaining about the poor salaries of our police force, the police still has a middle-level officer nicknamed ‘Too Much Money’. And it is not a baseless alias!

This officer, who is now said to be on the run, after his team leader in the Police IRT, DCP Abba Kyari, and four other colleagues were arrested earlier in the week by the Nigeria Drug Law Enforcement Agency (NDLEA) on a drug rap, does not only have too much money, he actually lives the good life to the hilt – with cars and mansion to boot. What effrontery! 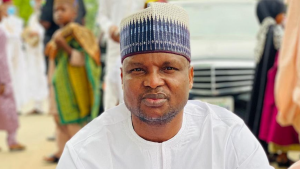 And now, even as the arrested officers are yet to have their day in court, a lot is already unravelling. And fast too.

For starters, watching the video of the sting operation on Kyari by the NDLEA reminds me of the analogy of the native fowl and the faecal waste.

According to the analogy, while we’re still at a loss as to how to clean up a fowl that stepped on fresh faeces, the reckless fowl makes matters worse by using its mouth to clean the feet. There cannot be a better explanation for a serial offender spoiling an already bad case!

While the police hierarchy, the presidency and the godfathers of DCP Abba Kyari in the corridors of power were already at their wit’s end as to how to wriggle the loveable cop out of the hole he had dug himself into, with the Hushpuppi mess, especially, as the Musiliu Smith-led Police Service Commission had refused to accept the initial slap-on-the-wrist punishment recommended by the IGP, the now-embattled super cop was busy doing the unthinkable: digging even deeper.

Yes! An Abba Kyari who was supposed to be on suspension was not only still on duty, but actually expanding his territory, from running after kidnappers and robbers to appropriating a few EFCC functions and usurping the NDLEA brief by going after drug barons and confiscating narcotics.

Of course, it would not be the first time the police or the military would be telling the Nigerian public that a particular officer has faced orderly room trial, suspended or even sacked, only to cleverly redeploy him to less visible duty posts and allow him to continue on the job. That was what played out in the case of a certain officer from Biu who the then President, Olusegun Obasanjo, had allegedly insisted should be retired, for his role in the dark days of the Abacha junta.

The officer was kept in service until his name cropped up on the tragic Apo Six murder saga. Even as OBJ was said to be furious that his earlier directive was not carried out, the police system simply moved the officer to one of the neighbouring states of the FCT, from where he could concentrate on his car dealership, even as he continued to draw his salary as a serving policeman. He eventually retired after attaining the constitutional retirement point.

So, it is not completely unheard of that Kyari continues to fully function in office, even as we, the public, were told he was on suspension. Of course, the Police could come out tomorrow to do some face-saving, and claim Kyari was doing an illegal duty. But we know better. It is the same story we hear whenever things go awry at the toll spots they call checkpoints.

But that’s a story for another day.

Back to the Kyari drug rap, however,

I wouldn’t want to dabble into who seized what, who looked the other way as the narcotics seamlessly passed through the airport checks, how 25 kilograms suddenly became 15kg, 8kg and finally, 7kg, or who offered to buy or resell whatever. For I think, between the police and the NDLEA, there’s still a missing truth they haven’t told us yet.

I’m just befuddled that crime now pays – for both the criminals and the crime fighters! Or is it that the two divides have so interfaced that the dividing lines have now all but disappeared? So much so that the two have now become interchangeable?

It is probably for this reason that we have been unable to, for instance, clear out several Indian hemp vending and smoking joints in the very centres of our cities. Yes, on several occasions, you’d see policemen and soldiers, in uniform, sitting and smoking weed with the urchins at those same spots. The same goes for brothels – where, as the local joke goes in street lingo, ‘every serious ashawo get DPO number’.

Similarly, every big-time drug baron, 419 kingpin, or fraudster businessman or woman has a long list of “agreeable” senior police friends at his beck and call.

That is the reason so many otherwise civil matters soon become state matters, with police, in some cases, serving as hired thugs and debt collectors, arresting and detaining whomsoever their criminal moneybag friends want them to. Suddenly, a civil case that the concerned parties should ordinarily take to court ends up at the police station, where the DPO and his boys become accuser, judge, attorney and enforcer – keeping hapless victims locked up for as long as the paymaster wishes.

Curiously, the police officers make no pretences about whose directives they’re acting upon. Sometimes, they could even allow your tormentor-moneybag to come see you in the cell, to further humiliate you. To prove to you that he runs the town.

That was the point behind the case of that photo, of a man in detention, which Kyari was alleged to have WhatsApped to Hushpuppi, who was outside the country and, therefore, couldn’t come to the police facility to mock his detained business rival.

But our security operatives do not only flaunt their lawlessness, they also flaunt the proceeds of their extra-constitutional engagements right in our faces. Yes, they live like rock stars! Attend the best parties and hang out with A-list celebrities and society’s creme de la creme.

Now, even when you’re known and recognised as your neighbourhood’s undisputed philandering champion, it should not embolden you to walk about adorning a necklace of condoms. But that was exactly what Kyari and his gang seemed to be doing. They were hugging too much of the limelight, becoming somewhat of a social media celebrity – for a job that otherwise required a lot of playing in the background. And then, there was this little bit about not properly choosing the crowd to be seen with, and in public too.

Even if we were to let Kyari’s appearance at that infamous burial ride, the outing at the recent wedding of the IGP’s son in Maiduguri was a bit over the board, especially at a time our Rock Star super cop was supposed to be sober and on suspension from duty.

YOU MAY ALSO LIKE: http://(OPINION) Anyim @ 61: Readier for more service to Nigeria

And to make matters worse, there had to be photo ops with Obi Cubana, who, although not convicted of anything sinister yet, is known to be a person of interest to both the EFCC and NDLEA, as well as a few other such agencies. Another classic case of a person going ahead to dip himself in oil, even as his enemies are plotting to roast him alive? Or was it more of one’s senses being inhibited by the hunger for whatever one wants to eat?

Well, I’ve read enough of Cops-and-Robbers stories not to be surprised by any tales of the unbelievable coming from our security agencies – both military and paramilitary.

In fact, even though I might not have all the facts, I’m one of those who believe Nigeria’s war on insurgency has failed to yield the desired results largely because funds meant for the prosecution of the war have gone into private pockets. That is why we now have so many billionaire Generals, both serving and retired. That is why, even as the troops are eager for the war to be over, the Generals are nowhere near battle-weary. Who gets tired of making money?

We have been treated with tales of raw cash stuffed into overhead water tanks. Of cash (forex) being dug up from another retired General’s farm. Yes, he actually ‘planted’ money.

About a year or so ago, a serving army chief was regaling us with tales-by-moonlight stories of how he saved up on his salary to buy a portfolio of choice property in Dubai.

And barely a year later, another story broke of how tens of senior military officers’ accounts were credited with N48m each – being the then prevailing exchange rate for $100,000. A handful got more than that amount, while several others got less. The source of the loot, according to the exposé, may not be unconnected to a slush fund originally meant for the expedition in the Northeast.

Of course, it would not be the first time insinuations would be made about similar ‘misapplication’ ( God forbid that I call it ‘misappropriation’) of funds in the insurgency war. We have yet to forget the eye-popping sums appropriated for cutting grass, and other IDP camp rackets.

We never got to the bottom of the Sokoto episode, where three non-commissioned officers were said to have vanished into thin air with N600m cash they were detailed to take a secret destination by their boss. That was a carryover from the previous administration – an era whose handling of the military budget also warranted the present government calling to question the tenure of Gen. Azubuike Ihejirika as Chief of Army Staff.

In fact, the tales are endless. And no service comes unscathed – from DSS to Police, to Customs, Immigration Service, Prisons, NSCDC, NDLEA, NIA etc. If it is not about one director-general pocketing 70% of money voted for election duties – leaving only a paltry 30% for the actual job, then it would be about another director funding a lavish lifestyle with an unaccounted slush of forex warehouse for subterfuge official assignments.

It did not start with the APC government of President Muhammadu Buhari – even when his government is determined to take everything to the next level. Cops, as robbers have always been a part of us. For neither George Ize-Iyamu nor Tafa Balogun served in Buhari’s government.

So, our security agencies are bursting at their seams with the tribe of John Umoru, AKA ‘Too Much Money’.