“In no event will the CBN or its directors, officers, employees, independent contractors, affiliates or agents, or any of its or their respective service providers, be liable to you or any third party for any use, interruption, delay or inability to use the eNaira website”…

The above is the Caveat Emptor which the Central Bank of Nigeria (CBN) has placed on its new baby, the e-Naira.

And, just in case you’re unclear about what areas you’re not covered by any insurance, the apex bank spells it out in clearer terms: “Lost revenues or profits, delays, interruption or loss of services, business or goodwill, loss or corruption of data, loss resulting from system or system service failure, malfunction or shutdown, failure to accurately transfer, read or transmit information, failure to update or provide correct information, system incompatibility or provision of incorrect compatibility information or breaches in system security, or for any consequential, incidental, indirect, exemplary, special or punitive damages, whether arising out of or in connection with the use of the eNaira website.”

Reading through this CBN statement, the image that comes to my mind is that of Pontius Pilate washing his hands, after condemning Jesus Christ to death and releasing him to the blood-baling mob to do with him as it pleased. That gesture was to literally and demonstrably wash his hands off whatever fate that would befall the Nazarene thereafter. A fate about which Pilate was not in doubt.

Pilate could have stopped the death sentence if he really wanted to. His word was law. No mob of seeming second-class citizens could change that.

Now, I have nothing against e-Naira – even though I’m not enamoured by it either. I’m, for one, still grappling with getting the hang of the physical Naira notes that have become so scarce, yet ‘valueless’ at the same time. So, I, therefore, have no appetite for any e-Naira (mis)adventure at this point. 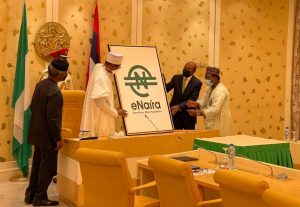 However, I will also not begrudge our ICT freaks and their tech-savvy ilk their love for innovation and desire to try out new things. My problem is that they are bent on dragging the rest of us with them. Must we put all our eggs in one basket? A kinsman of mine who stuck to our traditional ways of worship till his death always rationalized his not going to church with one question: if Jesus will come back as you Christians claim, what if he comes to the house while you people are away at church, who would receive him? We couldn’t give a satisfactory answer until the grand old man joined our ancestors at a very ripe age.

It was also in that village that I learnt that wisdom dictates that we check the depth of the river with one foot first. But, with this e-Naira thing, it would appear Buhari and Emefiele want us to jump in with both legs at the very first instance.  The truth, however, is that neither our banking system nor our legal and policing system is ready for the e-Naira regime. Forget what other country that is already doing it. Or that Ghana is set to launch its e-Cedi.

When I say we’re not ready, I’m hinging my position on the “success” we have made of the already existing products, like mobile banking and so on.

For instance, the last one week has been particularly nightmarish for me in terms of banking experience. And my only “offence” was allowing my wards to travel cashless. With only my Naira debit card to the boot.

Till this moment, 10 days after they left the shores of this country, that card has failed to work.

A call to my local bank confirmed that I had to tell them I intended to travel abroad with the card to enable them to programme it. Really? This was a card they marketed (and still market) as something that can be used in any part of the world and with any currency. I guess this is another case of the dubious “terms and conditions apply”.

But that was not all. I’m also expected to tell my bank, when I intend to return from such a foreign trip, to enable them properly activate the ATM card.

But then, a friend who works at the bank confirmed to me, off record, that the card does work for payments, that the problem is really with withdrawing cash abroad.

The shock however is that while the bank has not allowed any payments with the card, it has continued to send me debit alerts – deducting charges for every instance my people have tried to use it to make payments. Some of the charges are as high as N10,000, N8,000, N7,000 and so on. In the last six days, I have cumulatively lost close to N50,000 in bank charges, for payments that were never made. In that period, I have sent three different emails demanded by the bank. Nothing has changed.

I have been passed through no fewer than five different officers over the telephone – including my alleged Account Officer, who claims she cannot do anything because she’s on her annual leave. You then begin to wonder what the noise over digitization, mobile platform, ICT and working from home during the Covid-19 lockdown was all about, if an out of station officer cannot fix such a small issue electronically, or over the phone. But I’m soon jerked out of my wonderment by the beep of yet another deduction. This time, it is for N7,152 – a bus fare that never got to its destination account number.

But my experience is just one of the millions of instances spread across Nigerian banks. Still fresh in my memory is the case of an artisan who ran into the Abuja banking hall of his A-list bank desperate to block his account, as some hacker was steadily drawing out his money in tranches of N10,000.

All a disinterested customer service lady could do was give him a form to fill. She neither left her desk nor escalated the matter to the relevant quarters. She just wanted her form filled first.

Screaming, pleading and crying at the same time and asking that something is done while he was still filling the accursed form, the poor man was still at the desk when the last of his savings left his account.

Several weeks ago, a former colleague at The Sun newspaper shared, on Instagram, the real-time telephone conversation she was having with her bankers as her account was being cleaned out by a hacker. All efforts to get the bank to block the account were rebuffed, even when it was not in doubt that she is the actual owner of the account. She watched helplessly as more than N800,000 of her hard-earned money was cleaned off, while the bank was still telling her to ‘come to the bank on Monday’ to block the account. Shutting the ban door after all the animals have escaped!

Now, one of the major advantages of all these ICT products in the banks is to enable every transaction to leave a trail. Unfortunately, neither the banks nor the security operatives are eager to follow these transaction trails to apprehend fraudsters and scammers. It is only when APC is chasing PDP, or the government is going after perceived opponents that we suddenly remember that these trails do exist. For the rest of us, we’re largely on our own. Left to the whims and caprices of bankers and criminals. Even when some apprehended cybercriminals have openly identified the digital systems of a couple of banks as very easy to compromise, the authorities still do nothing.

So, why would the CBN and the banks force us to subscribe to digital products, and so vulnerably expose ourselves to cybercriminals and predators, without a scintilla of protection and/or hedging? Why can’t some of these products be made optional? Why would my bank force me to take an ATM I don’t need, only to regularly charge me for helping me “maintain” a card I didn’t ask for? What ‘maintenance’ do they do anyway? And why must you be made to pay even when you don’t use the card? How many of our banks still agree for depositors to withdraw N100,000 and below at the counter? Why must such withdrawals be from the ATM that is configured to dispense not more than 10,000 at a go, only to begin to charge exorbitant rates after the third withdrawal?

And lastly, why are we always in a hurry to jump onto a horse we’re ill-prepared to ride?

Why are we so eager to sign on to the digital future while still holding tenaciously to our analogue past?

We clearly weren’t ready for this adventure. In fact, it would seem that the fraudsters, who were waiting to pounce, were even more prepared than our banks and the Central Bank. That was why the ubiquitous scammers cloned the App less than 24 hours after it was launched, forcing Google Store to pull everything down barely 48 hours after takeoff. I think the e-Naira turf is too advanced a surface for our policymakers to play on.

Yes, there might be hundreds of thousands of Nigerians who are already experts in that field, but we know those are not the ones who would be engaged to run the process. For ours is a country where we deliberately shut out our best brains and hoist mediocre in the commanding heights of our country. So, while our experts take their expertise to other climes, the mediocre seize the reins of authority locally, trying to reinvent the wheel, and wasting everybody’s time and money.

That is why we’re still making a big mess of such routine stuff as mobile banking.

Unfortunately, this baby which has yet to walk wants to start out running. Of course, it is bound to stumble. That is exactly what just happened to e-Naira. Luckily, it’s just a false start. The first one. It only attracts a warning, not a dismissal.

But then the questions remain: if the CBN and the banks are unwilling to take responsibility for the pitfalls associated with e-Naira, why start it? Who is pressuring the CBN into this? Is it those jerking off on Diezani’s invisible bras? Or those giggling over the haul of condoms from Boko Haram’s Sambisa forest camps? Or those detaining Sunday Igboho’s cat? Or those using the funds for pulling 100 million Nigerians out of poverty to rebase their private bank accounts? Just who?